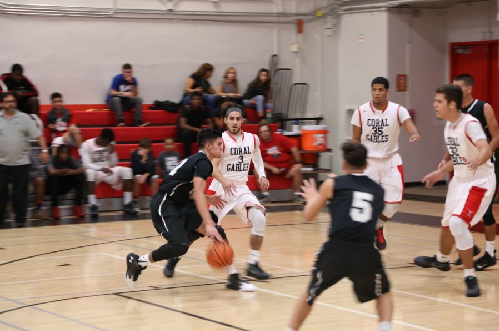 The Cavs' basketball team won the District Championship this year and made it all the way to the Regional Semifinal.

The Coral Gables boys’ basketball team has had a terrific season! They maintained a strong record throughout the whole season that enabled them to advance to the District Finals. They played against South Miami, a team they had lost to twice before, for the title. However, Gables came out victorious this time around in their highly competitive 56-55 win. Gables advanced from their win to go against the Homestead Broncos. They won this game with a score of 45-35. The Cavs moved onto the Regional Semifinal next. They would play against South Miami for the fourth and final time in this year’s rivalry between the two groups . Sadly, the Cavaliers came up short in overtime and lost 61-64. Regardless, the boys still had a great season and managed to gain another District title. They are already looking forward to next season and are planning on being especially prepared for their games against South Miami.