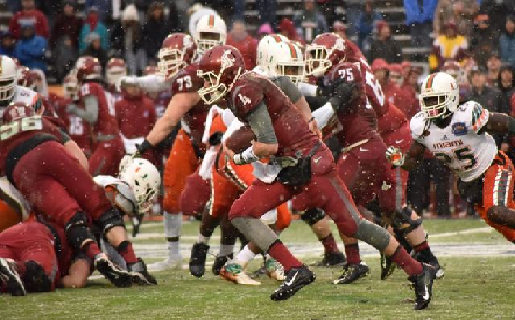 The day after Christmas, the University of Miami football team was working hard to beat the Washington State University Cougars in El Paso, Texas. The two teams faced off in the ironically named Hyundai Sun Bowl as heavy snowfall made for a very difficult game. It was a very interesting game with many twists and turns. However, the Canes hurt themselves with poor plays around the red zone and several penalties. The Canes played very hard, but it turned out to not be enough, and the Cougars took the game 20-14.

Both teams started very quick out of the gun; Washington State quickly scored a touchdown on the first drive of the game, and UM followed right behind with a touchdown of their own on their first drive. The Canes managed to convert on two fourth downs, including a fourth and goal, in order to put those first seven points on the board. The first quarter ended with the score still tied up at 7-7, but the Canes looked to score soon, with the ball on their own 30-yard line.

Unfortunately, the Canes threw a pass into the end zone for the first play of the second quarter that was bobbled by a receiver and intercepted by the Cougars. However, the Canes quickly recovered a fumble after that and had great field position, but were eventually forced to punt. Washington State managed to get the next points on the board with a field goal that gave them a 10-7 lead. With just over a minute left in the half, Washington State managed to score another touchdown, bringing the score to 17-7. The half looked over, but aided by some penalties on UM’s part, the Cougars managed another field goal that brought the score to 20-7 going into the half. The entire UM offense seemed to struggle in the first half, – especially the receivers, and the Canes hoped to turn that around in the rest of the game.

The third quarter started and finished with neither team putting any more points on the board. The Canes started the fourth quarter very well though with a quick touchdown that brought the score to a one possession game at 20-14. However, the Canes were plagued with bad luck in the red zone the remainder of the game; they made a run towards the end zone with around five minutes left in the game, but fumbled not ten yards from it, and the Cougars took possession of the ball. The Canes managed to make another run and got very close once again, only to have Washington State make an interception on a trick play on fourth down. The clock eventually wound down, and the Cougars emerged as the victors with the score at 20-14.

Both teams worked extremely hard to get the Sun Bowl. The Canes were ultimately their own downfall. The offense was unable to make much needed plays near the end zone and penalties hindered them on offense while helping the Cougars when they were on offense. Regardless, the Canes had a great season and know where they can improve next year. Be sure to support your favorite college team as they play in their own bowl game. For more information on this year’s bowl game schedules and scores, click here.