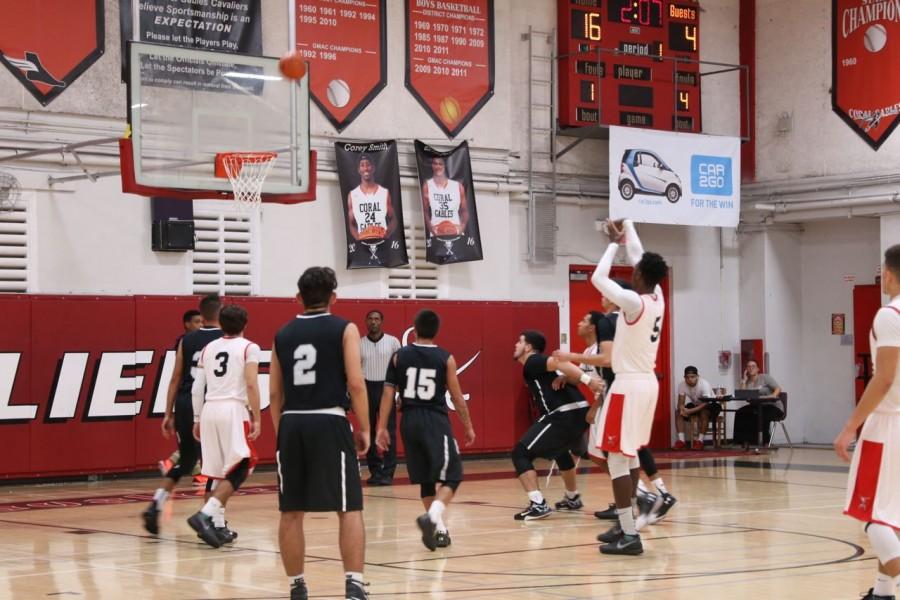 Gables had a dominant night against the Ferguson Falcons and easily won both the JV and varsity games.

On Wednesday, Dec. 2, the Cavalier boys’ basketball teams both swept by the Ferguson Falcons. The JV and varsity basketball teams faced off at our very own basketball court at 6 p.m. The JV team played first and won their game 60-50. Afterwards, the varsity team also played and added another ‘W’ to their record with a score of 65-39. These decisive victories added to the boys’ basketball teams’ achievements this year and have further prepared them for upcoming games. Both teams have high expectations this year and many players hope to obtain personal goals as well.

“We came out with great energy, intensity and played hungrier than ever. If we keep playing like that, no one can stop us,” sophomore Christian Brown said.

The JV team started out very strong. They finished the first quarter with a 14-10 lead over the Falcons. They continued to lengthen their lead in the second quarter and went into the half with the score 29-22. The Cavs started the both the first and second quarters a little slow, but finished strong in both to outscore Ferguson in both quarters. However, the Cavs did not start the third quarter slowly at all – they broke out with a 13-0 run to begin the second half. With the score now 46-29, the Cavs looked like they had the win locked solid. However, the Falcons started to gain with several three point shots in quick succession. The Cavs managed to put a stop to Ferguson’s influx of points and finished their game with a score 60-50.

Unlike the JV team, the boys’ varsity team began very hard and scored the most points of any quarter during the first quarter. They began the game with a 7-0 run and finished off the first quarter with a score of 20-8. During the second quarter, the Cavs’ scoring cooled off and they went into the half with a respectable lead and the score 30-17. They came out very strong again in the second half and continued to lengthen their lead as they brought the score to 47 -30. The Cavs did not give the Falcons an inch in the last quarter and scored quite a few points in the last minutes while keeping the Falcons from scoring too much. Eventually, the game came to a close and Gables was the clear winner, with the score at 65-39.

“Game after game, we grow as a family. Growing contributes to our chemistry and wins as a team. Our goal is to continue growing as a team and continue to enjoy playing the game we love,” senior  P. J. Hall said.

The game was a great testament to the work that the basketball teams have been putting in to get where they are. The varsity team continued their undefeated streak while the JV team managed to secure another win. Both teams looked very strong and are ready to face even tougher teams in the future. Be sure to catch these Cavaliers in their next home game against South Miami on Friday, Dec. 11 at 6 p.m. at South Miami.