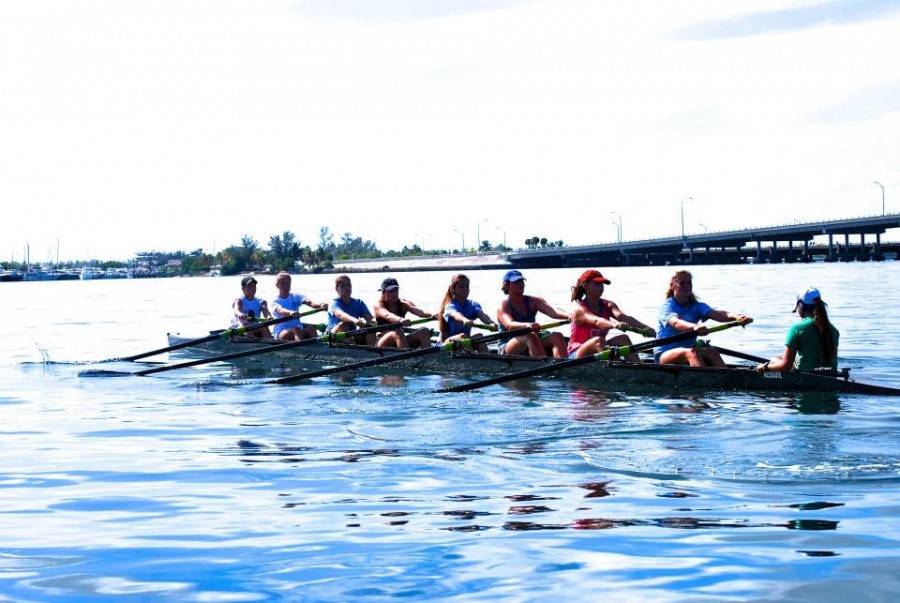 Miami Rowing Club is a great place to start if you are interested in rowing.

While driving by Biscayne Bay, you may have noticed the groups of people rowing by. Most likely, you saw members of the Miami Rowing Club (MRC) practicing for competitions. Many students at Gables practice rowing with MRC-an experience you might also want to explore.

“I used to be a competitive sailor at the Coconut Grove sailing club. However, considering that practice was only once a week, I decided that it would be a good idea for me to step up and participate in a sport that was more active- rowing,” senior Alexander Vanpuffelen said.

Rowing is a sport that is highly demanding-both mentally and physically-and requires intense training. MRC offers numerous opportunities for those that want to begin rowing, including summer camp training sessions and middle school, high school, adult and even master programs. With these, students are given the opportunity to acquire the skills and stamina to begin rowing. If you wish to learn more about the MRC click here.

“I started rowing sophomore year. I practice at Miami rowing club (MRC), and after a while I realized it was a sacrifice and a commitment so for those that would want to begin to row my advise to them is to make sure they are committed and willing to sacrifice because rowing takes up your life,” junior Sofia Bosch said.

Those who practice with MRC have the opportunity to attend regional, state and national level competitions. Among these competitions is the Miami International Regatta, which occurred the first weekend of April 2015. Interestingly enough, many students that graduate from MRC attend Ivy-League universities and even Olympic competitions.

“[Rowing] is time consuming and twice as painful mentally and physically. You need to handle the heat and stick with it. At the end of the day, you’ll walk away with some great memories and even nice legs to show for it,” senior Jake Sorenson said.

With dedication and commitment, rowing can become a huge part in your life. If you are interested, don’t hesitate to contact the Miami Rowing Club!