Back at it: Marlins Ballpark Game 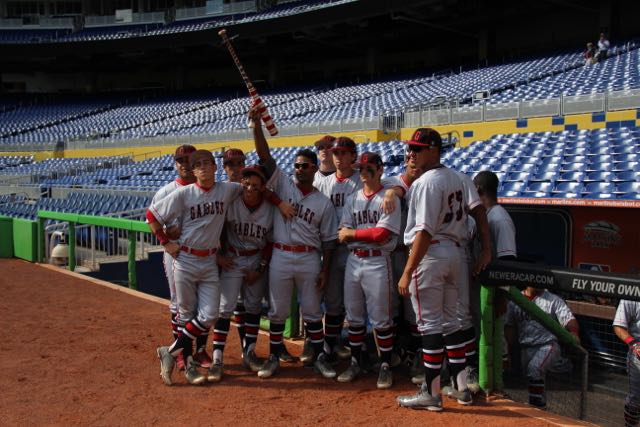 The players huddle together representing the team's strong unity.

The most anticipated game of the year took place on March 6 at the prestigious Marlins Ballpark against Braddock High School. Not only a game that our Cavalier players get excited for, but also one where fellow fans fill the stadium all dressed up in their distinctly designed white t-shirts. Shirts were handed out to every student that attented the event; other perks included receiving complimentary lunch and location. The Marlins Ballpark gave students the opportunity to enjoy a regular high school baseball game in a professional stadium.

“Playing at the Marlins Stadium is an experience that a high school player like me will never forget. Hearing the 700 plus fans cheering for you is such a heart warming feeling. The sounds, the views, the overall excitement of playing in a major league ballpark is truly a field of dreams experience,” senior Ryan Maya said.

“The most memorable part of the game was seeing the spirit and cheer of our very own classmates towards the baseball players. Although we lost in the field, this laborious game was won in our hearts ,” senior Ovidio Rodriguez said.

Overall the game started off slow, with no runs, no hits and no one left on base in the first inning. As the 5th inning came along, there were 3 hits, two runs and one left on base. The game was not an accomplished victory by the Cavalier Varsity Baseball Team, but certain players should be distinguished for their effort. Senior Andrew Cabezas pitched great during 6 innings, allowing one earned run. In addition, senior Franky Montesino made 2 hits in 3 at bats. The experience for the Cavaliers was truly one of a kind, even with the expensive venue complications.

“This year was more difficult with getting more tickets; they weren’t as accommodating as they were in the past. If I were to do anything differently, I’m not going back,” Coach Wisser said.

All in all, the game at the stadium was one of great anticipation and was well received despite the loss. More than half of the stadium seating that was available was covered by our very own Cavaliers, and more than 700 students shouted the Gables name with pride. It was quite the victory.