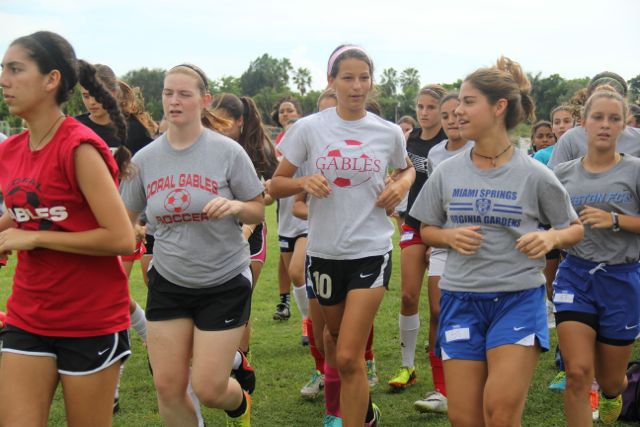 Winning a soccer championship isn’t easy – now imagine how much harder it must be when the team captains are getting injured left and right! The girls varsity soccer team had a tough time last year keeping their captains and leading figures away from injuries, but despite all that they achieved a great amount and were able to make it to districts. They are back this year – hopefully with a low tendency for injury – and they are going to prove that they have just what it takes to bring the championship home this year.

Last year, the team was able to finish a successful season despite the several bumps that they encountered on the road. In total, three out of its four captains were injured and unable to play, including last year’s senior captain, Priscilla Rodriguez, who was out the entire season. Still, the team ended last year’s season with 15 wins, 4 losses, and 2 draws. Overall, they ended second in their district, and even scored against Lourdes, which had been deemed almost impossible!

“I felt that the girls played well, considering all the injuries we had of key players. We also lacked in player leadership, which did not help with a young team, but I give our juniors credit for stepping up,” girls varsity soccer coach Eddy Aguirre said.

Like any high school sports team, the girls soccer team suffered a great loss in saying goodbye to its seniors – especially when these seniors played a crucial role in getting the girls to districts.

“We lost a couple fantastic players that we will all miss – not only during the games, but in practices too,” junior Lauren Kerzner said.

There is no doubt in anybody’s mind that these girls are coming back this year with full force and are aiming to surpass last year’s accomplishments. They will not only have new people coming in, but will also be training even harder themselves to go far this season and add the 2014-2015 girls varsity soccer championship to Gables’s long list of wins.

“We know of a lot of people who are trying out, and there’s already a pretty hard core of returners, but it’ll be fun to add more freshmen and see where we’re at. Hopefully we make it farther than we did last year and we don’t have any injuries,” senior Claire Shillington said.

In order to achieve these accomplishments, the soccer team is going to need to train harder and change certain aspects of their training. Coach Aguirre has taken it upon himself to toughen up his players and train them harder and better than last year. He not only has brought in new players that show promise, but has also set up practices so that the players can put more effort into competitive training.

“Our girls are hard workers and winners that will make us better than last year. There will be more competition all around in drills and scrimmages. The girls will be competing for playing time, so we know they will work hard and we will get the best out of our players,” coach Aguirre said.

Gables’s rival schools better look out, because this year, the girls varsity soccer team is coming in kicking hard and aiming for goals. They have much to promise and high expectations to fulfill, and they will not let Gables down.