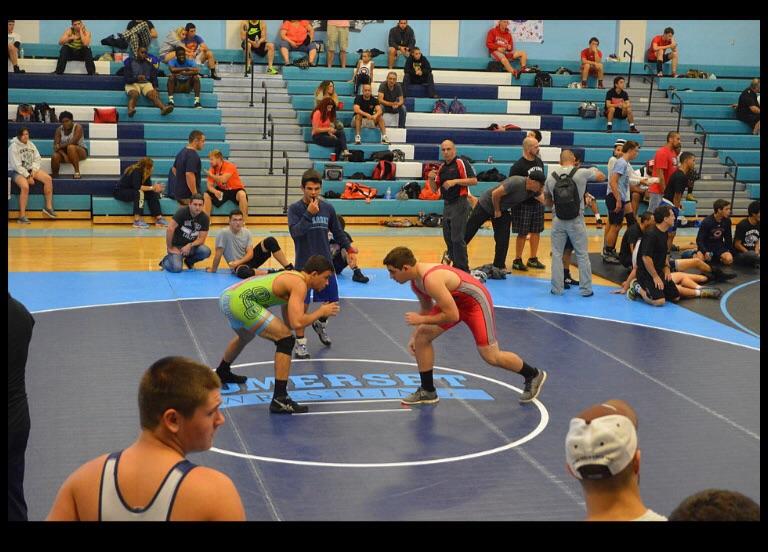 Coral Gables at the SomerSet Pre-Season Tournament on October 11th, 2014.

The Gables Wrestlers definitely know that when aiming for success, you never admit defeat. Last year, the wrestlers faced their matches head on and were able not only to qualify for districts and regionals, but also to have one wrestler qualify for states. All things considered, the wrestling team achieved a lot, and had a pretty good season. This year, they are aiming for greater victory and will hopefully turn this season into a great one.

Although the wrestling team came out victorious in several matches last season, they did not reach their goal of placing in states. The wrestlers were victorious at districts, where they placed a total of three times, but unlucky at regionals since their four qualifiers (Roman Ferrer, Mitch Gajardo, Joshua Zambrano and Antony Vizcaino) did not place. Wrestler Roman Ferrer went on to qualify for states, but did not place among the other schools.

The beginning of a new wrestling season means the integration of new members, some of which have little to no experience, and others who have been playing the sport for years. Like last year, this year’s wrestling team is made up of a large portion of sophomores and freshmen, but the head wresting coach, Angel Vazquez, is working them hard in order to train them into wrestling “beasts.”

“There are a lot of new freshmen and sophomores; they’re inexperienced, but they show commitment,” junior Joshua Zambrano said.

The wrestling team has high hopes for this season and is aiming for great success at states. But along with tournament victories, these wrestlers want to be able to maintain their weights in order to compete.

“Personally, I hope to make it to states, and as a team we’re aiming to eat less in order to maintain our weights, and hopefully get top three in the district,” sophomore Carlos Leon said.

Unlike last season, this year’s wrestling team is accepting nothing but victory and its members are doing everything in their reach to get there. The coaches are training their wrestlers long and hard in order to prepare them for the state tournament this year and their progress is apparent. The wrestlers are working on weight training, cardio, conditioning, weight control and, most of all, mat work. Luckily for the coaches this year, the wrestlers want these victories just as much as they do, and are willing to do almost anything to win.

“This is a more eager, hungry group of kids that want to learn and want to win. It makes our jobs a lot easier when we have kids that want to do it, rather than kids where we’re basically pulling teeth,” coach Hardy said.

The wrestling team are putting forth their best efforts to make last year’s victories seem like nothing compared to what they are going to do this season. There is no doubt that the team is training hard and will be wrestling even harder in order to make this season better than last year’s, and hopefully bring home many victories. See the wrestling team in action at the Cavalier Classic Tournament held at Gables on Wednesday, Nov. 5.