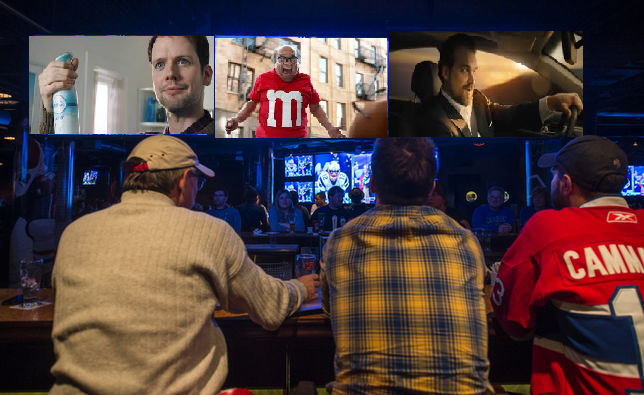 The Super Bowl is the best time to view ad performance at its peak.

It’s once again the time of year when the Super Bowl captivates audiences across America. As everyone knows, the best part of the Super Bowl—after watching football players get tackled and then getting to rampage through your city—is the advertisements. The Super Bowl has historically been the television program with the best advertisements of the entire year; from well-known companies, such as Pepsi and Apple, to smaller ones, such as Weather Tech the car floor mat company, everyone gets an ad for the occasion. Here, we have compiled some of this year’s best, and one of the worst, Super Bowl ads.
M&Ms
Our Rating: A++++++++^1000000000

In this day and age, there aren’t quite as many easy laughs as there used to be. Saying a simple one-liner in an ad during the 60s might have elicited laughs from millions, but nowadays it is much more difficult. However, this ad manages to tie together everything that is relevant to today’s society: humor, worker’s rights, progressive politics and chocolates that melt in your mouth, not in your hand. M&Ms accomplishes this with a small, bald package, more commonly known as beloved actor Danny DeVito. In the commercial, DeVito runs around the streets asking people if they want to eat him. Everyone says no, much to DeVito’s delight as he was formerly the perpetually angry red M&M that everyone wanted to eat. This ad is also done in conjunction with another ad of DeVito floating in a pool of melted chocolate saying “Souper Bowwwwwl.” This complex mix of humor and Danny DeVito makes for an instant classic that will surely be remembered through the ages. The ad has already proven to be sensational, seeing as it has over 3 million views in the M&M’s YouTube channel. This success can most likely be attributed to DeVito’s prevalence in pop culture as he plays popular characters like Frank Reynolds in “It’s Always Sunny in Philadelphia,” and stars in movies like “Space Jam,” “Matilda,” “Batman Returns” and “The Lorax.” Due to his constant appearances in staples of American pop culture, and being known for his wacky, off-kilter humor, he is a perfect fit for the ad, almost instantly alerting the viewer that this wouldn’t be an ordinary commercial at the first sight of the fantastic Mr. DeVito.

“Danny DeVito is basically a god among men and seeing him in the M&Ms ad was a nice surprise,” sophomore Jonathan Mesa said.
Tide
Our Rating: A-

This Tide ad is quite versatile and serves to advertise several things. It uses the most well-known Super Bowl commerical products—car, beer and auto repair—with one constant throughout all of them: there are no stains. In each frame of the commercial, each article of clothing that is worn is spotless and appears to have been freshly pressed and laundered. This is brought to the attention of the viewer during the last segment of the ad where the commercial’s “protagonist” (David Harbour) points out that, “It’s a Tide ad.” The ad continues to cycle through a rapid series of clips of Harbour saying, “Tide ad” in several different scenarios. The reason this commercial scores so highly is because of the genius simplicity of the ad. Why spend extra effort to create elaborate scenes and stories when you can just have a small selection of clips that are already known to be popular with consumers due to their continued use in advertisements? Ads by companies like Lincoln, Corona and Kay’s Jewelers all use the same cookie cutter format for their marketing; this is mostly likely because they are firm believers in the philosophy of, “If it ain’t broke, don’t fix it.” In this ad, Tide does something similar, and turns the fully formulaic ad format into a creative and humorous ad. Unsurprisingly, the ad has received extremely positive feedback from its customers. This is great news for Tide, as they were recently hit with negative publicity stemming from the explosive rise of the Tide Pod meme, which revolves around the delicious “forbidden fruit” that is the Tide Pod. As with many jokes, many people didn’t understand it was a joke and they actually began to eat Tide Pods; this caused them to suffer severe health issues and, in a few cases, even death. Regardless of that whole situation, the new Tide ad is very well executed and crafted into a minute-long collage of the most popular clichés in television advertisements.

“I had honestly thought the whole Tide thing was over, but I guess I’m wrong. At least they didn’t bring up anything about the Tide Pods,” sophomore Adrian Vidal said.
Febreze
Our Rating: C+

If you are someone whose “bleep do stink” (like everyone in the known universe), then this ad will be about something rather strange. It’s something that you might envy once you hear of it, but it is also so mundane that no one would ever think about it. The thing in question is having your “bleep” not stink. For those who are wondering what “bleep” is, the ad above provides a comprehensive explanation. The advertisement is by the only company who would possibly stoop so low as to chronicle the life of a man whose “bleep” does not stink (allegedly). The ad makes the point that not everyone’s “bleep” doesn’t stink and, therefore, you should use Febreze to un-stink your “bleep.” This ad—while for a decent product—is weak, irrelevant and dumb. In short, there are more people whose bleep don’t stink than people that enjoyed this ad.

In conclusion, this year’s Super Bowl ads were a mixed bag of fantastic, very good and alright. However, this may simply be due to the increase in average ad quality and the people’s desensitization to ads of marginally higher quality. Either way, the Super Bowl continues to be a source of top-tier ads for all, and one of the best times to see commercials at their peak.