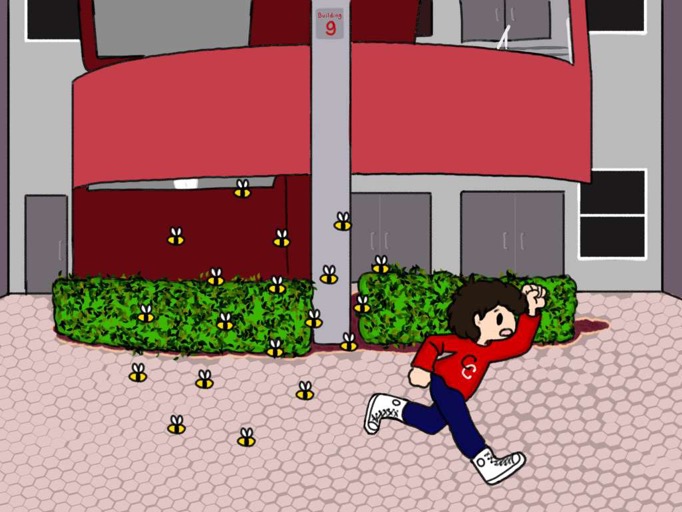 The return of the bees has created a lot of buzz on campus. The opinion is divided but one thing is true, they do not bee-hive.

You are waiting in line to get that sweet teriyaki chicken then going back to sit with your friends when, suddenly, there is buzzing all around. The students of Coral Gables Senior High have realized that the bees have returned with a different bee-havior.

The bees are nothing new; however, they have come back bolder than ever compared to previous years. Instead of staying near the trash cans, bees have been coming up to people. Some suggest that all they want is a bit of love because they mostly aim for the face. With students having been gone for so long, it is no wonder that they just want a bit of sugar.

The sentiment about the bees is drastically divided at Gables. Some students believe that they are prepared to handle the insects and know that, if unprovoked, they just do their job of preserving the beauty of Gables. Others live in constant fear that, due to bees’ bold behavior, their likelihood of being stung has increased.

Everyone agrees that their arrival has led to a hive of activity. They have increased productivity with lunch servers rushing to serve everyone as fast as possible and more students rushing to class, abiding by the 10/20 rule.

“I don’t think it’s a big deal. I hope those who are allergic stay safe from these bees. I have never been stung by a bee so if I do have an allergic reaction I am unaware of then maybe it might be a concern,” senior Julian Mesa said.

What has some students stuck is why the sudden resurgence of these insects has come during the winter. With fewer flowers in bloom, may-bee they realized a sweeter source of honey lies at Gables?

There are theories that the recent pep rally revealed how spirited Gables is especially after seeing Mr. Nelson bee-ing dunked. Others have suggested that perhaps they want in on the Gables Hall of Fame action and hope to be inducted as the hardest workers in the school. At Gables, our resources are as sweet as honey, but they stay for the spirit.

Unfortunately, although these bees just want to be a part of the Cavalier family, they are intruders that create an uncomfortable environment for some students. Plans are being made to migrate these bees. It will surely sting to see the bees swarm somewhere else, but the bees will never be forgotten.