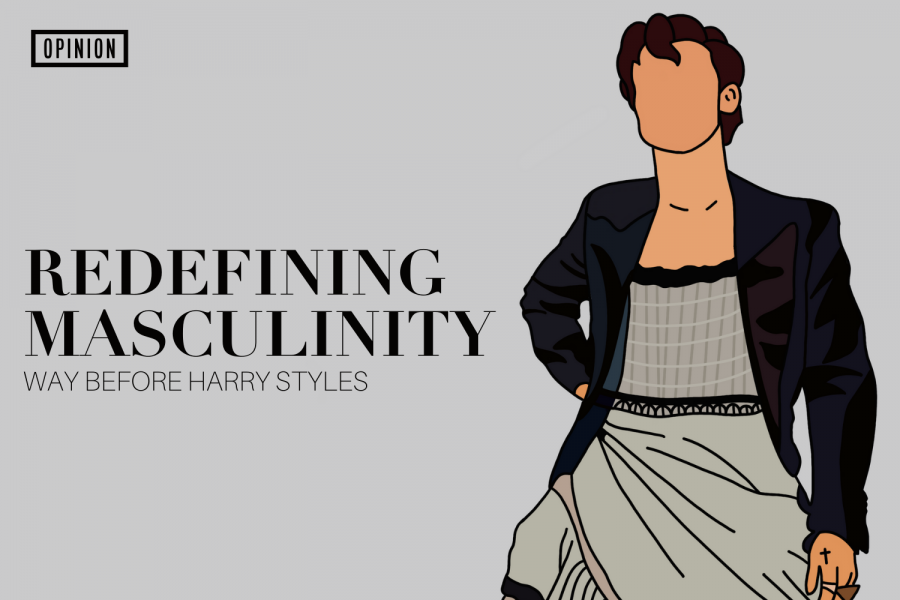 We all know and love what Harry Styles and many others have been doing to redefine what masculinity means, but we cannot forget to acknowledge those who did it way before him.

In this day and age, Gen Z has brought about instrumental change to many recent subjects about personal identity, stigma surrounding mental health and systemic injustice. One of the current social issues talked about by many is referred to as toxic masculinity, which has to do with the stereotypical idea of men having to always be “manly”. Now, what does this mean? Traditionally speaking, men should be dominant with certain predisposed ways to act, talk, dress and look. Luckily, more influencers, celebrities and activists have shed light on this recently and breaking barriers for men to be whoever they want. However, there are other significant past figures who deserve credit for slowly defeating gender norms.

“It is not justifiable to judge or anguish a person for living how they feel comfortable and happy. No one should have to worry about people hatefully neglecting and denying their relevance, which is inhuman and horribly wrong,” sophomore Ruben Centeneo said.

Kurt Cobain, the guitarist, singer and songwriter from the band Nirvana, wore dresses and skirts in the late ‘80s and early ‘90s—something never really seen before. At a time when it was common for men to wear neutral tones and monochrome outfits, Cobain wore vibrant colors and mixed patterns. He even wore leopard print for his famous Vogue cover and a flower dress with eyeliner on The Face magazine that featured his groundbreaking new look and band. He became a fashion icon to many, accessorizing with large white sunglasses, leather and fuzzy jackets. As a figure who was loved by many, this mostly had a positive impact and caught the attention of many journalists as Cobain continuously stated that it was completely normal and acceptable. When it came to style, Cobain was an emblem of grunge fashion which is still worn today by all genders. He was one of the first ever to address this topic as a normality; when journalists asked him about wearing dresses and makeup, he would answer that it was not controversial and that men should actually try wearing makeup. As someone who didn’t dedicate his entire career to talking about what men can wear, Cobain did an amazing job at normalizing men wearing makeup, dresses, and skirts. He had a great influence on his fans and others who listened to him. This helps beg the question, do articles of clothing really determine gender identity?

After Cobain made one of the first significant impacts, more celebrities and influencers from the early 2000s up to now began speaking out about the toxic masculinity present in fashion and appearance. Billy Porter, an American actor and singer, has also taken part in showing that clothes do not have a gender. He speaks out about toxic masculinity and talks about the normalization of men wearing makeup and still being men. “I’m not a drag queen, I’m a man in a dress” he said at the 2019 Oscars Red Carpet event, claiming that men don’t have to put a label on themselves to be able to do anything. Porter’s style evolved over the years. He slowly started wearing lip gloss and nail polish, then went on to wear eccentric patterns and more vibrant colors like “feminine” pink. He then started wearing dresses, skirts and a new style of tops and coats that had never been worn by men before. Billy Porter was a great influence because the negative responses that were given to his outfits and looks always pushed him to go further into breaking these toxic gender barriers. Porter showed the strength and resistance needed against those who disagree with such a radical idea of gender neutral fashion and inspired others not to let themselves be pushed back from wearing or doing what they want.

Taking a different look at mainstream fashion being abolished was during the 1960s by the luxury brand, Yves Saint Laurent. They became known for their female models dressing in “masculine” clothes such as suits, oversized leather jackets and knee-length shorts…Many thought this was very elegant and cool, so why is it such a controversy when it goes the other way around?

Some fashion designers from world renowned brands took their part in creating men’s “feminine” collections. In 2004, Hedi Silmane, who was the creative director for Dior until 2007, released a winter menswear collection of skirts similar to Kurt Cobain’s. Giorgio Armani also switches the materials and fabrics he uses in women’s clothing for men’s clothing which makes it easier for men to find more colorful and patterned clothing. When it comes to the designer himself and not his designs, Marc Jacobs is known for wearing makeup and nail polish, heels and skirts. This became more common and gave designers more chances for creativity and more to work with as they could make their models wear absolutely anything. Some of these fashion designers were very influential and might have made some of the biggest impact as they did not only affect a group of people but the whole fashion industry.

“I think it is good to be masculine and it’s something that many guys want to feel. The point where I think it becomes toxic is when there is this whole ideal that guys can’t cry or do feminine things because it threatens their masculinity. I think it has become so engraved in our lives that most people don’t even notice it’s an issue,” junior Stephanie Andrade said.

Fashion has become a way of expression and it should not be limited to any gender. There are still so many stereotypical ideas throughout the world that create predisposed obligations and traits for the gender we’re born with. Men can cry, cook, sew, and never have a bad temper. These changing ways should not have to be discussed, they have to become the new normal. We can thank celebrities like Harry Styles and Timothée Chalamet for making this even more mainstream for the newer generations, but let’s not forget those who attempted to break barriers before them and showed that it was possible.