The Conflict Between Water: Which Will Turn the Tide? 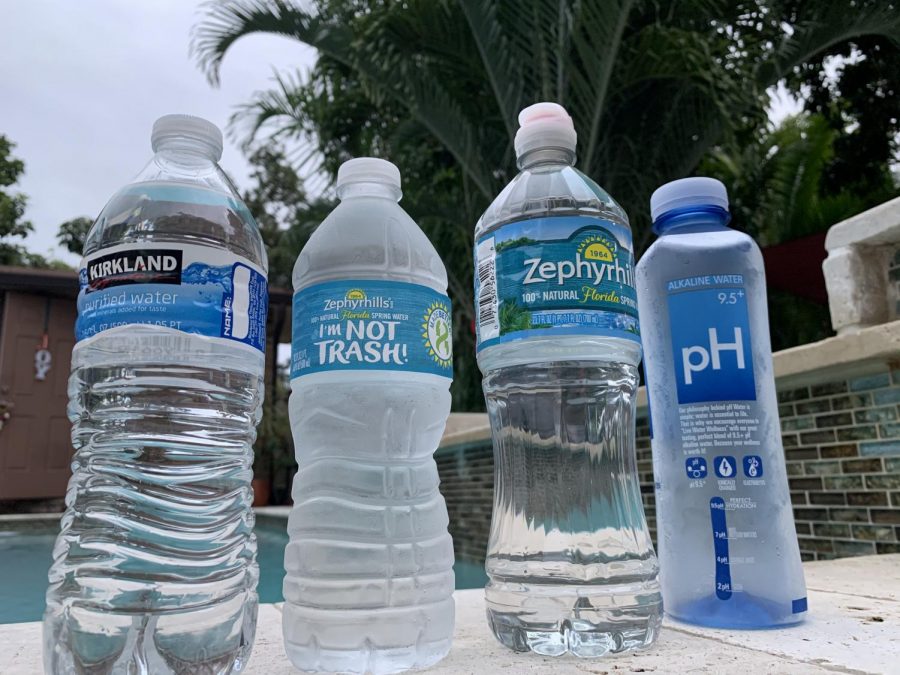 The bottled water market has very diverse competitors, but there is one that submerges the rest.

The majority of the human body is made up of water, so being hydrated is essential to survive. Lack of water can negatively affect the body and drinking water that immediately sends people running to the restroom as if they are lactose intolerant can also do the same. The bottled water market sources its water from all over the world and there are subtle differences in each that can change the whole experience. With the abundance of water bottle brands that give the consumers various different experiences, only a certain few take the cake, with others that should be avoided at all costs. Even if you are very thirsty, some of these waters are worth being dehydrated.

Aquafina
Our rating: F
Aquafina water has such a sharp taste of Lolita’s fish tank from the Miami Seaquarium. The bottle itself is just an utter failure and opening it is like Pandora’s box, filled with monsters to wreck the human body. This water leaves a horrible aftertaste and even if it is cold, it still tastes like expired licorice. People’s taste buds are destroyed by this water and it has ruined my days on multiple occasions. It is sold at every theater and carnival Aquafina which is incomprehensible because after eating the delicacy of an elephant ear, people have to wash it down with Hudson River water that just ruins the whole treat.
“Aquafina almost always has a very plastic taste to me, and something about the bottles themselves just irritates me,” senior Maxwell Dickinson said. (Pull Quote)

Dasani
Our rating: F
Dasani bottled water is just recycled toilet water with added plastic. The water has a strong presence of plastic and people have experienced migraines due to the smell and taste. Dasani is similar to Aquafina except the migraine is not as bad. Dasani just tastes unsanitary and should be avoided at all costs. Just like Aquafina, being dehydrated is a preferable experience instead of ingesting the poison that Dasani is. Drinking gallons of Dasani will rot all the organs in the human body and will probably be the reason for the next zombie apocalypse.

River Water
Our rating: D
This variety of water is far too unpredictable. If the water is running and clear, chances are it will not have many parasites, but it is not worth the risk, as there is a chance that it has parasites. On top of that, all river water, no matter where it is found, tastes like it will make you sick. There is no river clear enough to taste good. I have had my fair share of river water back in the day and I am completely perplexed how Aquafina and Dasani send me faster into shock and the hospital than the current of the Amazon River. At least when drinking river water there is a chance to obtain extra protein from critters inhabiting the river. At the same time, it will not kill you like salt water, there is just a chance.

Smart Water
Our rating: B-
Smart Water is another solid choice, but is slightly worse than Evian because it does cost a bit more and is not as refreshing as some of the other brands. The logo is also very simple, which does not attract attention or add any “aesthetic” appeal. If it was cheaper, it would be a better option but nonetheless because those additives it makes it a viable option. Smart water apparently has additives like electrolytes that enhance the human body or just makes people feel better instead of actually going outside. Last time I had restroom problems, Smart Water’s electrolytes I know did not improve my problems, but rather just made me use the restroom more frequently. The name is also ironic because there are several aspects of the water that are not intelligent and the logo is just lazy. It is decent water, yet there are several aspects such as price and taste that could make it “Smarter Water”.

Evian
Our rating: B
Evian is decent water; it is well known and usually the water that everyone compares it to. It definitely gets the job done and even when it is warm, it is still tolerable and usually available at most places. The logo of the Evian is visually appealing and the water comes from the alps in France making it a solid option for consumers. Although Evian rhymes with avian, this water will not send people soaring with a feeling of satisfaction; it is mediocre at best.

Zephyrhills
Our rating: A
Now this is the good stuff. Not only is it some of the best water on this planet, its price practically makes it a steal. The water comes from springs in Florida and this provides some of the freshest and cleanest tasting water in the whole market. The water makes the consumer feel satisfied and somehow leaves them wanting to drink even more. Zephyrhills accomplishes what many have tried, making bottled water actually a delicacy.

“Zephyrhills is the best brand because it has almost a sweet taste and gets the job done,” junior Ethan Moore said.

Tap Water
Our rating: A++
Bottled water is just fake water that can be a huge gamble depending on the brand and the day. Although Zephyrhills is probably the best out of all bottled water, tap water is the best water overall for several reasons. It does not pollute the earth or the human body. Tap water has stricter regulations that allow for a better taste and ensures that the body will not rot. To feel the impact of bottled water at its fullest potential, the best time to drink tap water is at 3 a.m, after waking up extremely parched. Imagine this, you wake up sweaty after dreaming about Mr. Obama shooting that three pointer and you need something to quench this thirst. Walking to the kitchen to obtain a glass of ice cold tap water. As soon as your lips taste the tap water your third eye awakens and everything is clearer. Tap water tastes magical and that dopamine spike allows for better sleep and a positive way to start off the day.