Staying True to His Word: Biden Picks a Diverse Group of Appointees 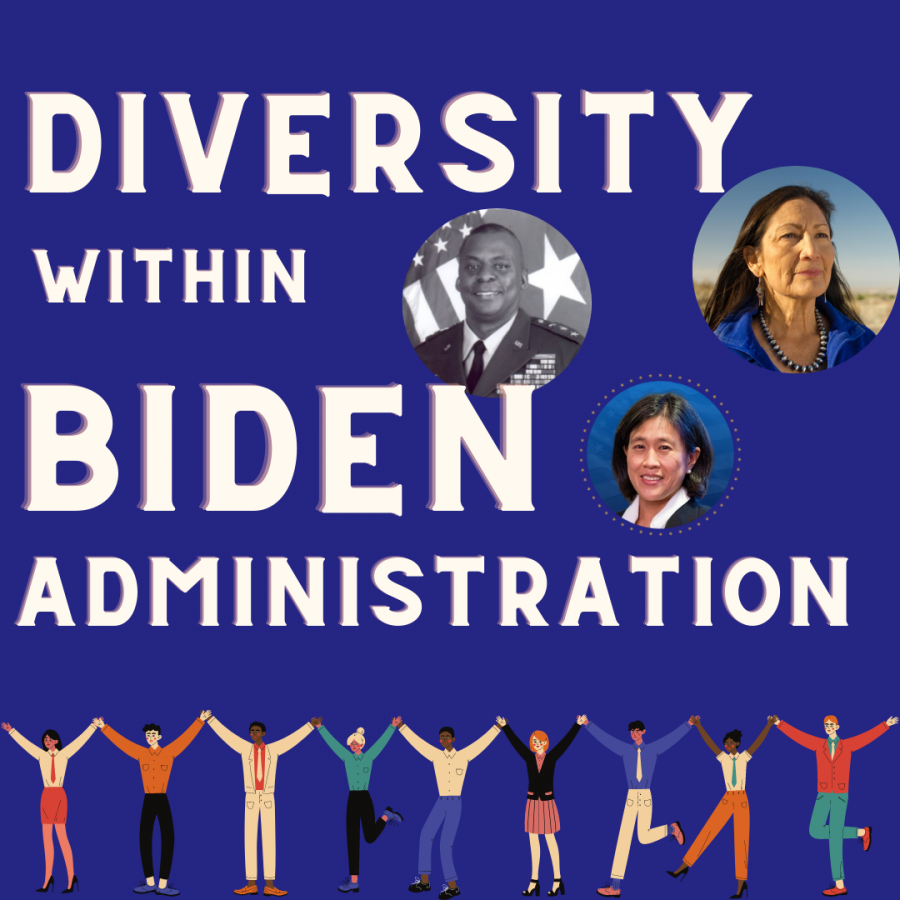 Compared to the lack of diversity in the Trump administration, Biden appoints people to his Cabinet from varying backgrounds and ethnicities.

Beginning with the historic nomination of Kamala Harris for Vice President, President-elect Joe Biden pledged to create a diverse administration. With one of the key components of his campaign being to represent America’s very diverse and sadly overlooked demographic, Biden has begun the diversity inclusive nomination process of his cabinet in the Senior Communications and Economic team. Seeing women of all backgrounds elected for such important administrative jobs is a huge progressive move on Biden’s part. As of right now, he has stayed true to his promises, providing a sharp contrast to the Trump administration and a better representation of the entirety of the United States.

The Senior Communications Team is a vital bridge between the White House and the American people. This team is in charge of communicating to the press everything that the administration does. It is made up of several spokespeople and advisers for the President, the Vice President and the First lady. Seven women will make up this team once Joe Biden is sworn in as President in January, with two of them being women of color. Aside from taking on historic roles, these women will provide stable presidential communication. No more frantically looking through Twitter to find out what the President did or said, communication matters will be handled professionally — the way it should be.

“This will be great for young kids to see people like them in government. Plus, if it helps him run the country better, then that is terrific,” freshman Henry Stoller said.

Unlike Trump’s “Operation Warspeed”, which consisted of political leaders and practically no scientists, Biden has put together a highly qualified COVID-19 response team. From former Food and Drug Administration and Centers for Disease Control and Prevention officials to doctors of large research companies, this skilled and experienced team is ready to tackle this issue professionally and effectively. The team also includes several women, with their main focus geared towards working with state and local governments in order to bring down the infection rate while also keeping the economy stable. Moreover, they have remained adamant to treat the racial disparities in the healthcare system especially during this time as not only have we seen many unable to afford a hospital visit, but come time that the vaccine is getting distributed, they want to make sure minority groups and people of color are not left behind.

One of his first picks was a multi-faceted group to lead the country’s economic recovery. To be appointed as Office of Management and Budget director is Neeera Tanden, the daughter of Indian immigrants. For treasury secretary, Biden has named economist Janet Yellen. Economist Celia Rouse will be the first woman of color to chair the Council of Economic Advisers along with her two male counterparts. Both the positions aforementioned will be extremely influential in responding to the economic crisis that America is facing right now. They will work closely with the President to advise him through this challenge. Rather than putting the economy over the livelihood of the American people, Biden and his team are striving to solve these growing problems efficiently and cohesively.

Contrary to the make-up of the Trump Administration, which included inexperienced members in high-profile positions (i.e Hope Hicks), everyone who has been selected to contribute to the Biden team is extremely qualified and has plenty of experience playing important roles in our government. For his senior communications team, all seven women served as his campaign advisers with most of them previously working for the Obama administration. On his economic team, all the women have been trailblazers in the profession of economics; a profession that often does not embrace women openly. Not only that, the female economists have built long careers for themselves and are ready to not only lead the country towards recovery, but to also work on social injustice issues that relate to the never ending rat race in the world of domination in the economy.

In a country as dissimilar as the United States, it is troubling to acknowledge that only about 24 percent of women hold parliamentary positions. Having such few women as policy makers does not reflect the “ best nation in the world” image that the United States so desperately tries to uphold. This stark percentage will likely change as Biden, and many others, are optimistic that these steps toward inclusion in the White House administration will pave the way for women and all minority groups to have equal voices of America once in for all.