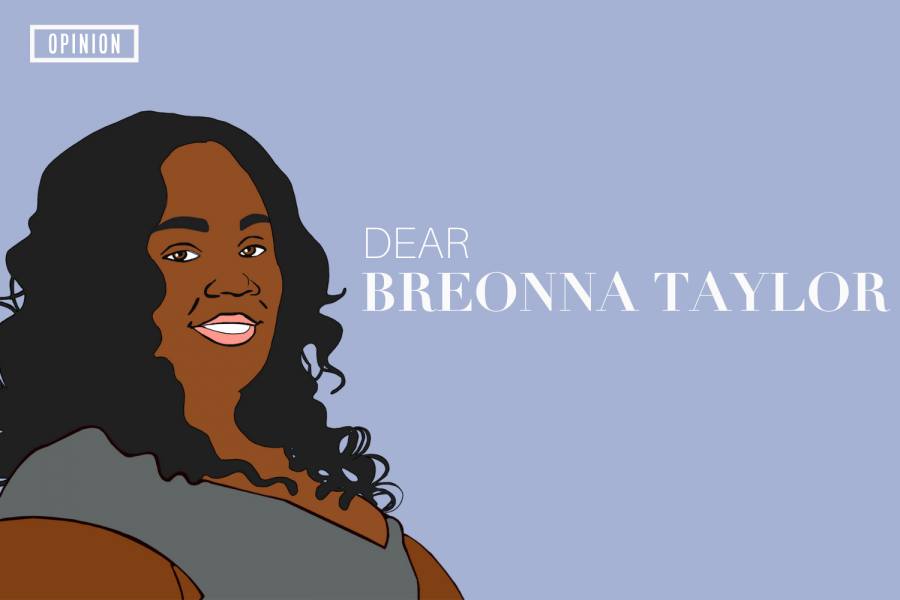 Dear Breonna Taylor,
I am appalled by the behavior that has been bestowed on your name. To give a little back story on her case for those of you reading, she was a phenomenal EMT working round the clock to save lives. On Mar. 13th, 2020, officers Jonathan Mattingly, Brett Hankison and Miles Cosgrove stormed into her Louisville home shooting approximately 32 rounds of bullets with 6 of them hitting her. After the policemen entered the home without announcing themselves, her boyfriend Kenneth Walker used his legally purchased gun to defend himself and Breonna yet they still chose to fire their bullets without even announcing that they were policemen. You did not deserve this Breonna and justice must be sought for you.

To those of you reading this,
Her death was a horrific tragedy and it was avoidable. In the midst of protests for Ahmaud Arbery and George Floyd, we had to endure knowing that a black woman is not safe even in her own home. Her name made headlines on national news and a trending hashtag on the majority of social media platforms. There were those from celebrities to everyday people constantly posting her for the sole purpose of demanding justice for her and her loved ones; however, like many others who were wronged by the criminal justice system, her name became a trend and a meme. The performative activism that tarnished her name is unforgivable. From creating a mural of her in her hometown while her murderers were on administrative leave to Vanity Fair using her face for the cover of their magazine talking about what a beautiful life she had. She could have had a beautiful life, but even that was stripped from her.

As the months went on, protests continued; however, no one really knew because the minute there were solely peaceful protests, most news channels decided that highlighting them was not of significance. Five months after, her case was finally presented to the Grand Jury. With the abundant amount of actual evidence citing how the policemen failed to comply with simple human rights, the Grand Jury ultimately had no choice but to indict one of the three officers on three charges of wanton endangerment over shots being fired into the neighbor’s apartment– not her murder. When the Attorney General Daniel Cameron announced this decision, it was a slap in the face to Breonna and her family. How can a piece of property mean more than a black woman’s life? This verdict was disgraceful and we cannot stand by and watch her become a part of the statistics of lives lost because of police brutality.

This past weekend, a peaceful protest in Downtown Miami was held to advocate for her. Among myself were 70 other people standing in the rain, continuing to chant her name. The leaders who organized this protest spoke about the certain precautions necessary to take, such as keeping the Bail Fund number on your arm in case of police arrest and making sure that no one steps off of the sidewalk accidentally. The fear the police have instilled in peaceful protesters cannot go unnoticed. The worst part about this is that these same protocols are not taken for other protesters, such as the Right-Wing protesters in Michigan that brought their arms into a public building. Although these restrictions are meant to deter, it is important to continue protesting the injustices inhabitants of our nation face.

The systemic racism that plagues our nation will only get stronger with the current Presidential administration in control. Our president, Donald Trump, never once spoke about her death, rather choosing to continue showing his allegiance to white supremacists. From the local to national level, our duty is to elect people who will serve for the people. Come November 3rd and the weeks preceding, those eligible must use the right to vote by voting for those who will seek justice for her and her family.

Breonna, I am so sorry this is taking so long. Your incredible life was just beginning and those who took it away deserve to pay in the highest form. For everyone reading, continue looking for local peaceful protests conducted for her and if there are not any in your community: create one. We owe it to her to get into some “good trouble”.