Was this a Presidential Debate or Debacle? 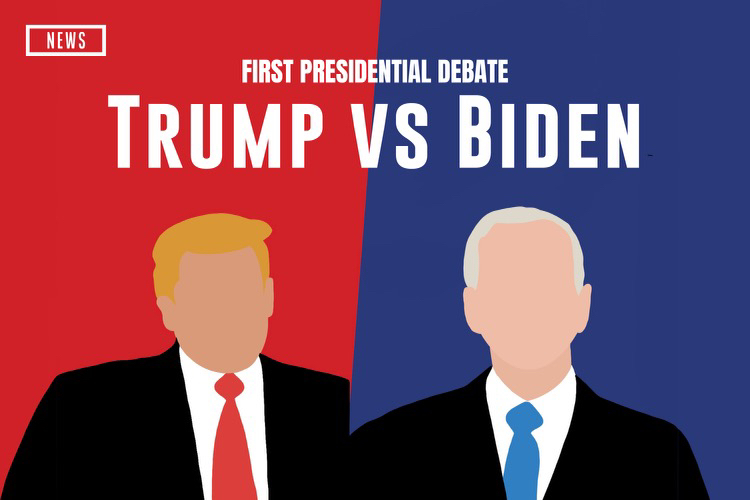 The First Presidential Debate between Trump and Biden seemed more of a street fight than an actual debate.

Tuesday night was an intense night for the United States as it was the first presidential debate with Vice President Biden, the Democratic nominee, and President Trump, the Republican nominee. Named one of the worst debates of all time by multiple news channels, it was an embarrassment to American politics. Chris Wallace, the FOX News moderator, formulated a series of questions based on pressing topics that are at stake during this election. In each round of discussions, Vice President Biden was much more thorough in explaining what he would accomplish in his presidency, and he had more sensible answers than Trump. President Trump was quite rude and was deflecting the questions, so it was hard to understand his views.

As the debate went on, the positions the candidates took on subjects were becoming more apparent. Vice President Biden was very moderate with his arguments unlike Trump who focused on being the aggressor, constantly interrupting Biden and failing to oblige to the rules when it came to speaking time. Biden’s strategy was equipped with remaining calm and speaking to the American people rather than having a deep-rooted argument with Trump. Throughout the evening, Trump kept deflecting the questions as well as constantly interrupting Biden. For example, when the subject of healthcare came up, Trump kept insisting to Biden that he was overtaken by the left and would not even speak to the point where Biden said “just shut up man.” Never in the history of presidential debates has this behavior ever been accepted; however, with the events taking place over Trump’s term, this is the new normal. Trump even went as far as personally attacking Biden’s family, including his son who passed away and his son who was a former drug addict.

The first controversial topic presented to the candidates was on whether or not Justice Ginsburg should be replaced during this presidential term. Trump started off by commending Justice Barret on her fabulous work as she graduated from Notre Dame top in her class and is endorsed by many people and even some liberals, which is a flat out lie. He said they had a right to nominate someone before the election since he is still president until January regardless of the outcome of the election. Biden, on the other hand, mentioned that the American people have a right to be part of the decision of who goes on the Supreme Court and they can do that by voting for the candidate that aligns most with their views. He explained how Trump would be taking that right away if he chose another supreme court justice. With the misaligned views on the Affordable Healthcare Act and women’s reproductive rights between Republicans and Democrats, having a conservative majority could threaten millions of lives.

The heavily anticipated COVID-19 topic was brought up as the United States continues to lead in having the most cases and related deaths. Right off the bat, Biden made it clear to the viewers that Trump knew about this virus early on yet chose to do nothing about it. Of course, immediately after, Trump discredited these claims even though under his administration this virus has caused mass destruction to many of the American people’s health and the overall economy. As the topic went on, Biden says that Trump lacks a plan in terms of healthcare and how he is ruining the healthcare system. Trump then makes the point that he does not want to socialize medicine, however he still does not have a plan to replace Obama Care which is a lifeline for so many people. At this point, there is a lot of back and forth between the candidates and it almost resembles a street fight.

“Objectively, I don’t think it went well because of the unprofessionalism of both Trump and Biden. They were talking over each other and the moderator and going off topic,” freshman Anabella Rodriguez said.

After it calmed down for a brief moment, they began discussing racism, which has plagued the United States and has continued to reveal itself through the devastating deaths of George Floyd, Breonna Taylor and many other black lives. Wallace asks the question about how the candidates are going to deal with the racism at hand. Biden stays middle with his argument, saying that he believes the United States needs police reform. He does make the statement that most police officers are honorable but there are a few “bad apples” who need to be held accountable for their actions and beliefs. On the other hand, Trump spoke about how a lot of these protests are violent and ineffective with him never once speaking out against the police which leads to Wallace asking Trump if he is able to condemn white supremacy. He, once again, deflects the question and blames it on “the left”. This raises the serious question that the reason Trump might not be able to condemn white supremacy because he knows a good portion of his voters might be affiliated with groups like the Proud Boys or even the KKK. Appallingly it also insinuates that he is a racist.

Wallace forcefully moved on to one of the most pressing topics the world phases: climate change. President Trump is asked about the deadly wildfires in the Western portion of the United States, saying there needs to be much more forest management and this is not necessarily an effect of the climate crisis. Trump then calls Biden out for supporting the Green New Deal, thoughBiden has already made the statement that he supports his own climate plan and not the Green New Deal. The Green New Deal is a grand plan to tackle climate change and is supported by mostly left winged people. Biden can not support it due to how he is taking a very middle stance in this election and the Green New Deal is associated with the radical left. Trump has often ignored science with COVID-19 so it’s not surprising he did the same for climate change.

Another appalling part of the debate was when Trump stated that if he deems this a fraudulent election that the Trump administration would not transition into office smoothly, showing how dangerous this election will be for the country. Never in the history of presidencies has someone ever made a remark on not peacefully transitioning out of office. Voting has become more crucial.

Since this debate was not as informative for the people, it is important to make sure you are educating yourself on these issues so you can make an educated vote. We need to know what’s at stake here so we can make a sensible choice. Trump has not brought people together, he has only segregated them. As Vice President Biden says, we as a country need to unite, not divide.