Ruth Bader Ginsburg: A Letter to an Icon 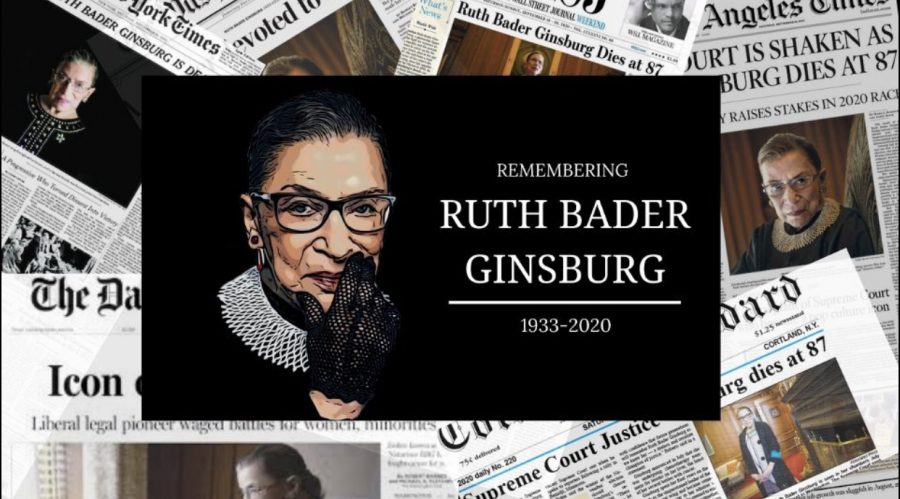 Throughout her entire life, Ruth Bader Ginsburg has fought for equality for women in every aspect.

We want to thank you. We want to thank you for being one of the most inspiring and influential women of the 20th and 21st centuries. Ever since we were little girls, we have looked up to you as a strong, powerful woman defying the odds in government. You were the one who made us feel that our voices could be heard in the public service sphere, giving us the confidence to fight for what we believe in. You broke barriers for us in the workplace to preserve the future for your posterity– and we reap the rewards. Your persistence and resilience in environments where you were hated solely for being a woman have inspired us all.

It is unimaginable to us that you have passed. Even though we never had the pleasure of meeting you, we still feel connected to you in a way. Growing up in politically-engaged households, your name and monumental dissenting opinions were often the talk of our dinner time discussions. Your supreme court decisions proved that you were not afraid to stand up for yourself, your morals and your politics.

We are extremely fearful to be in this country now that you are gone, RBG. The blatant disrespect of your passing has made us afraid of what else this country –particularly its government officials– are capable of. Frankly, for having been a person who constantly worked towards the good of America, you deserve better than to be tweeted about your replacement a few hours after your passing- we’re talking to you, Mitch McConnell. Even many of those who we thought were better than this because of the precedent with Justice Scalia’s retirement in 2016 still took the side of disrespect for their own political party’s gain. We didn’t think that common decency was difficult to manage. Yet, the governing individuals of this nation once again surprised us with their lack of any compassion or empathy and at the very least, a level of empathy that could transcend political boundaries. Frankly, we are terrified that our reproductive rights will be taken from us knowing the current administration does not care.

We are going to fight for you, Ruth Bader Ginsburg. We will not stand for this disrespect. Generation Z will carry on your legacy for the years to come. As of now, we will do everything in our power to help stop the reversal of the monumental change that you contributed to and led. Once we are of age, it is up to us as a generation to not only preserve your life’s work of precedents and supreme court decisions, but also to continue working towards equality in every sector in your honor.

In the spirit of Ruth Bader Ginsburg, it is time for us to fight for what we believe in. It is time to stand in the face of injustice and most importantly, vote on Nov. 3. If you would like to register, click here for more information. Uphold the legacy that she created for the generations to come.