The Star Spangled Banner: A Compilation of the Worst Performances in History 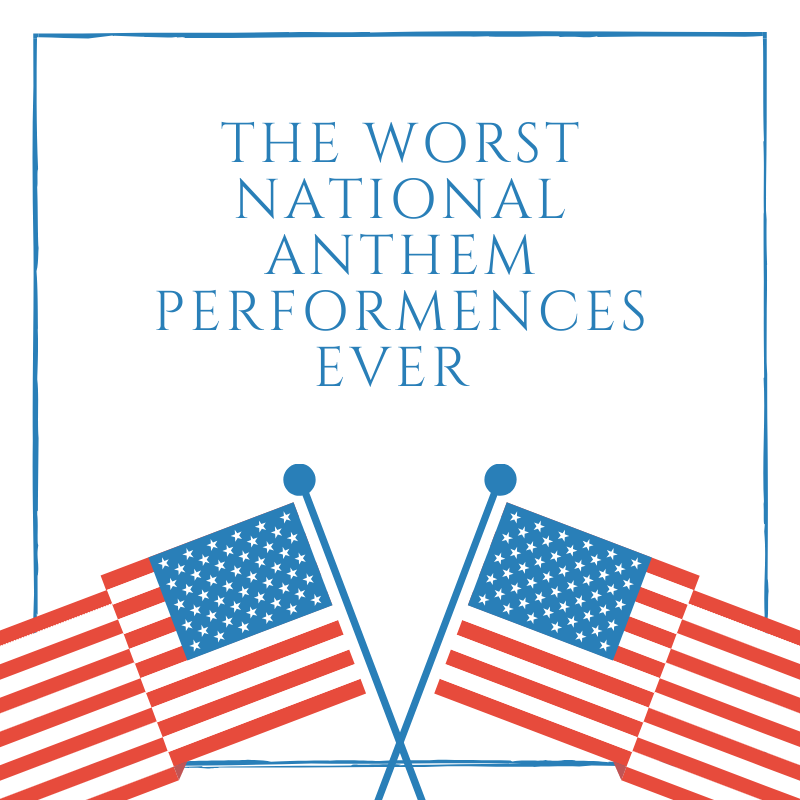 After the recent performance failure of Chaka Khan in the 2020 NBA All-Star game, it would be out of line to not rank it as one of the worst national anthem performances in history.

You have a day off and plan to spend it the right way by going to a sporting event. You go online and purchase tickets to the event of your choosing and sit through hours of traffic and lines and once it’s finally your turn to scan your ticket to get in, you realize your phone provider is T-Mobile and you’ll have to get to the back of the line while you wait an eternity for your tickets to load. “Finally”, you mutter to yourself as you make your way to your seat. The light starts to dim and everyone anticipates the traditional national anthem. It’s a singer you’ve never heard of before but you foolishly think to yourself that they can’t possibly be that bad. Right before they begin to sing, you take your cap off and kneel your head down with your eyes closed, but you quickly re-open them as you are convinced the singer was getting attacked mid-song but no; it’s just one of those performances that leave you wanting to reenact Matt Leblanc’s famous line, “Why God, why?”

With the recent criticism-spangled performance of Chaka Khan at the National Basketball Association (NBA) All-Star Game, it is only the perfect opportunity to relive some of the worst national anthem performances of all time.

If you enjoy listening to jazz music, you would probably be scarred by Fergie’s National anthem rendition as her attempt was unforgettably horrible. Her attempt at creating a jazzy, slow-paced national anthem in the 2018 NBA All-Star Game was just as successful as the New York Knicks’ 2019 off-season. Once she began singing, you could immediately sense the atmosphere in the stadium begin to tremble as everyone was in awe at what they were witnessing.

Fergie’s outstanding performance is arguably enough snatch a spot in the Guinness Book of World Records, holding the record for using the most possible pitch combinations in a national anthem, and the NBA players watching would agree as they all, in visible confusion and bewilderment, laughed hysterically as Fergie appeared to be impersonating everyone’s favorite 60-year-opera singer. Her vocals were surely not the best, but Fergie surely instilled national pride into her audience with her bellowing of  “the land  the breee, and the home of mrave”.

“I honestly could not believe what I heard. I was in complete awe of that performance,” sophomore Austin Schulte said.

After being scarred in 2018 from ever returning to an All-Star game ever again, you still decided to check in on the 2019 All-Star game and came to the conclusion that Fergie’s performance was just a once in a lifetime train wreck. With that said, you quickly get over your fear and purchased your tickets to the 2020 NBA all star game.

You waited two full years, mustered up all your courage, and apprehensively walked into the arena. You hesitantly find your seat and sit down. Already, your heart rate is slowly rising, but you remind yourself that the past is in the past. Once you notice that the lights start to dim, you begin to panic a little but manage to calm yourself down enough as they announce the singer performing the national anthem, Chaka Khan, who is a ten-time Grammy award winner.

Not even 10 seconds into the song and you could already feel the performance going southbound. You get flashbacks to Fergie’s performance, but this one is different. Time seems to stand still as you are in disbelief at what’s happening. Your eyes and everyone else’s around you begin to fill up in with tears as Chaka Khan wrapped up the song. The sounds being made just did not sound human as she was all over the place with her vocals.

You arrive home from yet another horrendous All-Star weekend and tell your family about Chaka Khan’s crippling performance, but oh boy do they have a story to tell you. Your parents sit you down and start to tell you about the actual worst national anthem they’ve ever been to.

It was July 25, 1990 when the nightmare began. Roseanne Barr, an actress and comedian, wore a baggy, untucked white shirt for her monumental performance.  Right from the start she’s practically screeching the song and racing to finish. When she gets to “ramparts,” we hear the first screech. There is a nervous chuckle and the boos begin to fall. Her singing was the equivalent to a yelling match with Casper the Friendly Ghost: an overall, complete train-wreck.

“The people running these events really need to take a closer look at the people that they hire to sing the anthem, it’s honestly just getting disgraceful at this point,” sophomore Daniella Castro said.

It has been several decades now that the National Anthem has been regularly sung at sporting events and, for the most part, there have been exceptional singers to represent the Star-Spangled Banner. But over the last three or so years, more and more odd performances have risen up and, although they may be extremely hard to sit through at times, they do give quite the laugh and a memory to look back upon one day.