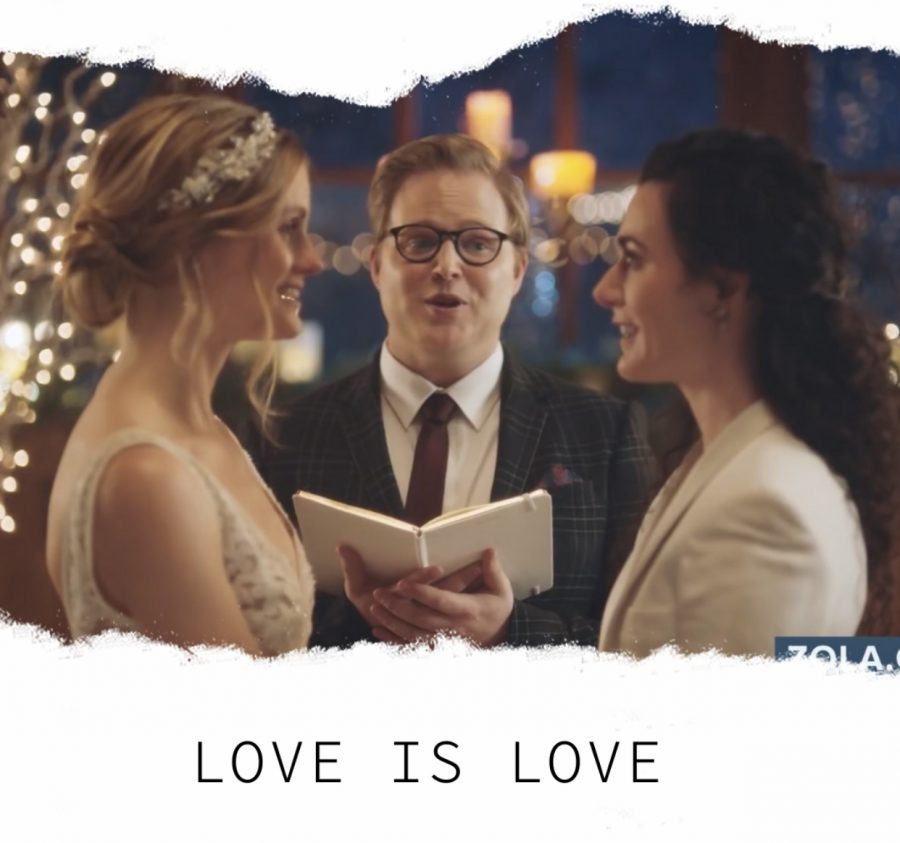 Hallmark took down a commercial made by the wedding planning website, Zola, due to One Million Moms' boycott.

Early in the week of Dec. 16, the famous media company Hallmark Channel aired a commercial by Zola, a wedding planning company, that included a marriage of a same-sex couple. One Million Moms, a branch of the conservative American Family Association, published a petition and boycotted Zola’s commercial in a way to persuade Hallmark that airing commercials that include same-sex couples is incorrect and contrasts the purpose of the channel. The company should have not been swayed to remove the commercial because featuring the lesbian couple gives much needed representation to the Lesbian, Gay, Bisexual, Transgender and Questioning+ (LGBTQ+) community and their choice goes completely against their brand of love and acceptance.

As a result of Hallmark withdrawing the commercial, many celebrities took their opinions on social media about this polarizing topic, wanting to show that it is homophobic to deem an innocent commercial as inappropriate just because it is a same-sex couple. There were six commercials released by Zola and the only one that was taken down was the one featuring a homosexual couple.

First of all, a commercial that features a same-sex couple is in no way harmful, as even a few seconds in an ad provides representation for the LGBTQ+ community. Inclusivity is important because it shows viewers that it is okay to be or feel the way they do, further ending the conservative stigma surrounding same-sex relationships. Further, this commercial was in no way vulgar, so there was no excuse to cover up the fact that this ad was pulled because of the same-sex marriage depicted. This implies that their type of relationships are wrong and this lack of visibility can negatively impact potential viewers. The LGBTQ+ community exists and television companies, like Hallmark, should be ashamed of frowning upon them. Same-sex marriage was legalized in all fifty states in 2015 and this freedom should have been taken into consideration by Hallmark before pulling the ad.

“I think what they did was an unfair decision that reflected how there is still prejudice against people of the LGBTQ+ community. How one lives their life and who they love should not affect anybody,” sophomore Isabella Osorio said.

In addition to this, Hallmark’s whole network is about love and acceptance. The Hallmark Channel is a hotspot for many American families to watch cheesy, romantic movies. Their retraction of this commercial goes against what they supposedly stand for, as they are not willing to accept love in a form that is not what they deemed “conventional”. By refusing to promote love in one form, Hallmark is denying the validity of these members of the LGBTQ+ community. Family and love is universal and can be shared by all, regardless of sexual orientation.

Many of the One Million Moms representatives argue that young teenagers viewing same-sex relationships will feel forced to change their own sexuality. It is hypocritical to think that a commercial with a same-sex couple will force teenagers into these relationships while the majority of advertisements that include couples are heterosexual, yet there are still teens that choose to be gay regardless of what they are not seeing on television. In other words, the comprehensive amount of advertisements that demonstrate heterosexual marriages are more compelling to teenagers than the rare amount of ones that include same-sex couples. Teens may be impressionable, but the idea of conversion because of one ad is hyperbolic, to say the least.

“In my opinion, not showing commercials like those slows down progression towards the acceptance of same-sex couples in our generation. Minority groups that are similar to One Million Moms that do not accept these representations of the LGBTQ+ society should not have a stand on influencing considerable corporations such as Zola,” sophomore Lucas Aguirre said.

A week after the boycott, the Chief Executive Officer of Hallmark Channel mentioned in an interview that he was willing to present a movie that included a same sex couple: a clear attempt to please those offended by the removal of the ad. All in all, the commercial should not have been taken down, considering that it recognizes the validity of the LGBTQ+ community and, by removing it, Hallmark contradicted everything they stand for. To ameliorate the situation, Hallmark should not only reinstate the ad, but give more LGBTQ+ representation as a whole on their platform.