Baby Yoda vs. Baby Groot: Survival of the Cutest 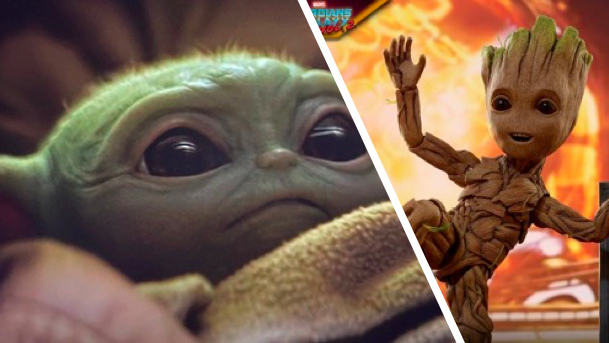 With that adorable little face there is not even a competition against baby Yoda.

Disney+ has become an insanely popular streaming service with millions creating subscriptions to watch all of their favorite Disney TV shows and movies. In addition to all of their nostalgic content,  Disney has now created multiple original series, one of them being The Mandalorian. This news Star Wars spin-off series contains the newest internet sensation: Baby Yoda.

Since the minute Baby Yoda made his first appearance on The Mandalorian, fans have been going crazy over him. Although Baby Groot, a member of Marvel Studios’ Guardians of the Galaxy, and his unforgettable dancing skills will forever be in the hearts of the franchise’s fans, Baby Yoda and his gigantic, lovable eyes have officially stolen Groot’s thunder.

There have been many tweets and memes obsessing over this creature’s unbelievable cuteness. In essence, he looks like an old man in a baby’s body, and he is the being we never knew we needed. From those big eyes and floppy ears to the little gray hairs on his head, what is not to love? Baby Yoda even wears tiny brown robes like the older version of his kind, the Jedi Master Yoda, making him more lovable than was ever thought possible.

Although Baby Groot has his signature dance moves and his admirable way of saying his famous quote,”I am Groot”, he is no match for Baby Yoda.

“I think Baby Yoda is much better. He’s better because Groot is literally going to get eaten by termites but Baby Yoda can squash termites with his mind,” freshman Jon Trueba said.

On top of how adorable baby Yoda is, he also has far more superior powers. Although he is just a baby, Yoda can use the Force in the same ways displayed by the Jedi and the Sith on the big screen. His powers are showcased in the second episode of The Mandalorian, when Baby Yoda used his mind to stop and levitate a hulking monster called a Mudhorn. Of course, right after saving the Mandalorian he had to take a power nap, further adding to the cuteness factors. Despite his age, approximately 50 years per the show, Baby Yoda is not just a bundle of joy, but his intelligence is unparalleled, making him a total package

“Baby Yoda is an adorable little creature, and I believe that he is much better that Baby Groot because he has cool powers. He honestly just looks so much cuter,” freshman Sofia Rodriguez said.

It is clear to see that the appearance of Baby Yoda on The Mandalorian has sparked the fans’ adoration of the beloved character from which it is based on, Yoda. The once-favored Baby Groot has been cast into the shadows in order to make way for the up and coming star of the new Disney+ show, and it is undeniable that Baby Yoda holds a glorious throne when it comes to the fan-favorite baby creature of Disney’s expansive cinematic universe.