Baby Boomers and Their Wounded Egos 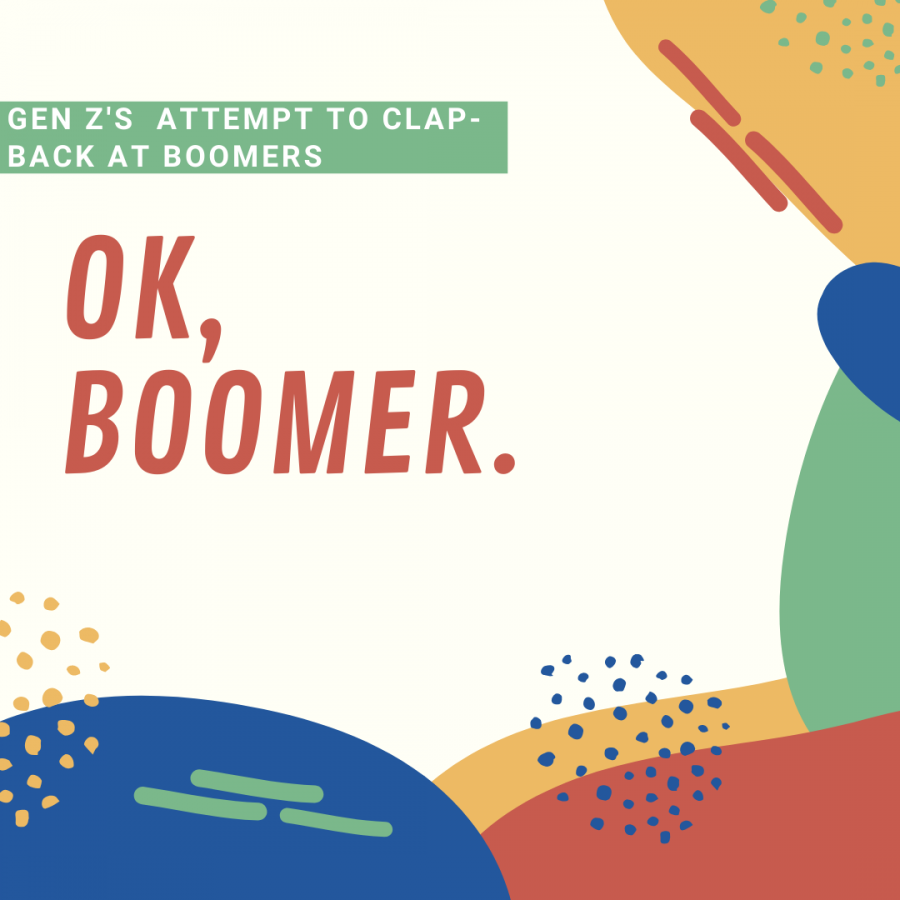 "Ok, boomer" is Gen Z's recent attempt at clapping back at boomers and their dismissive ways.

In the past several weeks, the phrase “ok, boomer” has become prominent on nearly every Generation Z social media platform. Used as a “clap-back” of sorts in arguments, “ok, boomer” is essentially meant to point out the mindset prevalent in baby boomers. Boomers argue that this is the highest of insults, maybe even a slur, when in reality it is just a witty comeback to their commentary on generations after them.

Boomers commonly look down on their succeeding generations. Whether it is complaining about how “addicted” to technology they are or how “soft” the younger population has become, boomers attack millennials and Generation Z for just about anything. Is it the younger generations’ fault that they grew up with a Global Positioning System (GPS) instead of a map, or a smartphone instead of a rotary? There is absolutely no reason to bash millennials or Generation Z, and yet baby boomers go ahead and do it just about half the time. Seeing as boomers constantly have something to say about younger generations, it is only fair that younger generations receive the advantage to do the same. Instead of retaliating to these notably close-minded individuals, they dismiss them with “ok, boomer”. Boomers cannot complain about being dismissed by the same generations they disregard constantly.

To continue, boomers should not complain, and especially take the phrase to such an extent when they, in fact, deserve the dismissal it implies, considering the damage they have caused to our economy and planet. Boomers were born into the best economy possible, with strong unions, a surplus of jobs and the ability to send students to college for about 3,000 dollars each. Taking into account such a stable economy, boomers decided to take advantage, without concern for the future generations. With such financial benefits and the amount of boomers at the time, you can imagine how quickly the wealth offered to them was depleted and the debt that they drove the United States government into. Further, with the potential effects of climate change being first introduced to the government in the 80s, the baby boomers in power simply chose to ignore the research that proved the claim and enjoyed the state of their climate while simultaneously destroying it for their convenience. Boomers were given the best state that the United States has had in its history, fresh out of the World War II victory and they gobbled it up, leaving the remains for future generations. Not only do these future generations have to deal with the debt boomers put the U.S. in, but the rotting climate they created. Acknowledging exactly how much damage boomers have created, the phrase “ok, boomer” is nothing but justified.

Some boomers have taken the phrase as far as to argue that “ok, boomer” could be considered a slur. Not only do they have no position to complain about it in the first place, but now they have deemed the phrase a “slur”. Although “ok, boomer” can be viewed as a passive insult, its severity is nowhere near that of a slur. In an over-dramatic statement, radio host Bob Lonsberry compared “ok, boomer” to racial slurs utilized against African-Americans, and he received thousands of responses in regard to his tweet. Many rightfully attacked him because “ok, boomer” can, in no way, be considered as offensive as slurs rooted in hundreds of years of racism, bigotry and oppression. Just because something is insulting, it does not make it equivalent to a phrase connected to slavery and segregation.  One response that received 20,000 retweets and 80,000 likes was from stand-up comedian John Mulaney, which was as follows: “If you are comparing the badness of two words and you will not even say one of them, that is the worse word”. This is a very strong point, justifying why comparing it to other derogatory phrases is completely out of proportion. “Ok, boomer” has no right to be called a slur. Boomers have complained about this phrase extensively and should realize why they have no place to whine about a phrase that gives them exactly what they deserve.

“I do not think boomers should be mad about ‘ok, boomer’ because it is not as if they do not always have something to say about Gen Z or millennials, so I think we should have a turn at criticizing boomers in a way,” freshman Angie Iraheta said.

Boomers have no reason to be upset or take a harmless comment like “ok, boomer” to the extent they have. In fact, they should be held more accountable for their actions on account of them being older and wiser. If anything, the baby boomers are being given the lightest of consequences, considering the fact that not many are even considering the position that their generation put the future in. Boomers have no reason at all to be upset about a phrase that, in its entire context, truly means nothing in the grand scheme of things.