Man Against Man Should be Officiated by Man 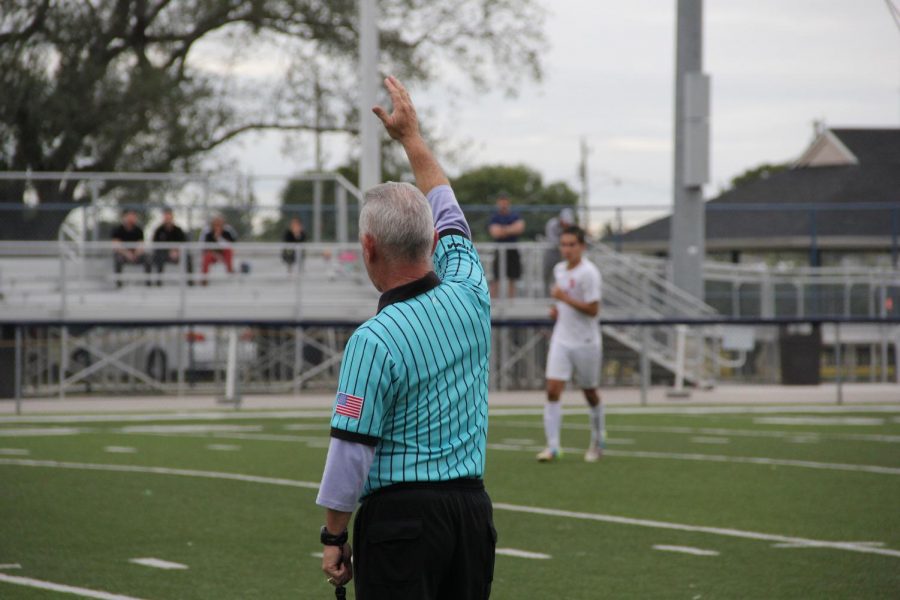 The referee at a Cavalier Soccer game blows his whistle, announcing halftime.

In Game 6 of the 2019 Major League Baseball World Series, the Washington Nationals held a 3-2 lead in the seventh inning against the Houston Astros. Shortstop Trea Turner hit the ball, sending it as far as the pitcher’s mound. The Astros’ pitcher, Brad Peacock, picked it up and threw it to first base to out the running Turner. The throw, however, was off target, causing the first basemen to outstretch his arm in front of Turner who would collide with the first baseman’s glove.

Usually, this would be called as an error by the first baseman as he did not catch the ball. However, it was ruled as an interference by Turner. The play was reviewed, but the call stood. This mistake in human officiating rekindled a heated debate that has taken place across all sports: should humans be the ones officiating sports when artificial intelligence (AI) possesses the ability to officiate games as well?

Humans are imperfect by nature. In response to these faults in officiating, sports leagues around the world began reviewing plays with high definition cameras. For example, the British Premier League (BPL) instituted the use of a Video Assistant Referee. This is a system in which dozens of cameras are placed around stadiums, feeding live streams of plays to a control room where other referees review it. Not only does the BPL use this system, but the National Basketball Association also has a Replay Center in Secaucus, New Jersey, initiated in 2014. Artificial intelligence systems are being discussed to potentially officiate baseball as a result of a recent cluster of events involving a referee going against the decision of those in the replay center in soccer, basketball or baseball.  Regardless, officiating using artificial intelligence will ruin the competitive spirit of sport and the computers will not be able to truly determine the attempt of a foul and give out the adequate punishment.

First of all, sports themselves are not perfect, but there is beauty in their competition and unpredictability. If artificial intelligence was to officiate, sports games will become less exciting because every player will most likely try to play it safe. This is because they do not wish to commit a foul, as regulations against a potential foul would become much more strict when it is up to AI to make the call. The most boring sport is one lacking any sense of suspense. If players are too afraid to take a risk that might put their games, and potentially their careers, at stake, people will slowly begin to lose interest in sports.

Another issue is that artificial intelligence simply does not have the ability to differentiate between certain offenses. A computer may not be able to determine the caliber of the foul as the human eye would. This can lead to either giving the offender a break for a hard, unnecessary foul or ejecting a player for a tap on the shoulder. If someone tackles with very little force but a camera angle shows otherwise, the player can be harshly penalized. On top of this, a player cannot even argue with a robot to appeal their case like they could with a human official.

Many believe human referees only pose obstacles to the sport they are officiating and should be removed from their positions all together as technology does seem to have the capability to replace them. However, human officials have qualities necessary to deal with the intensity of sports that AI cannot offer. For example, robots cannot actively break up a fight or disagreement on the playing field. These brawls often happen during an intense game between rivals and need to be dealt with on the spot. In contrast, a robot cannot stop these fights as fast as a human referee, nor will they be able to penalize the players for their misconduct.

“The actual idea of having technology enforce the correct calls is a good idea. This system is just poorly delivered because it is up to the referee to make the final call,” freshman Nathaniel Lleva said.

Overall, artificial intelligence is limited and it should not replace referees in competitive sports. Referees may be constantly overlooked and considered a nuisance at times, but without them, we would not have the notable competition of the games we know and love. With that said, referees in every sport need to be trained to keep up with the modern games, reducing the number of mistakes made while officiating. Although the precision of AI seems like the best bet, it is important to look beyond the obvious and consider the power of human intelligence in sports.