“Joker”: A Source of Controversy On and Off the Silver Screen 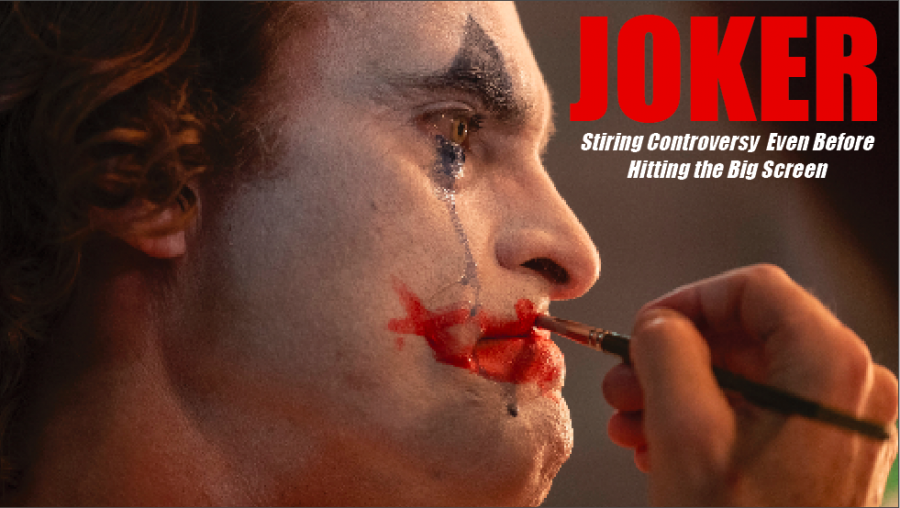 Even before hitting theatres, the "Joker" movie has been scrutinized by its blatant normalization of violence in the film.

In the weeks leading up to its release, “Joker”, written and directed by Todd Phillips  has opened doors to floods of criticism due to its glamorization of mass killings. Warner Bros., the studio behind the gruesome film finds itself in a crisis after family members of the victims in the Aurora, Colorado movie theater shooting raised their concerns about the film by writing a letter in which they expressed their dissatisfaction with the plot line and message portrayed by it.

The film follows the life of a man named Arthur Fleck, one that turns from a narrative of a troubled man’s daily struggles to that of a rampant serial killer. This character evolution sparked concern from the audience in light of all the recent violent acts that have been occurring on a national scale. “Joker” should be removed from the box office as it not only lacks sympathy for those involved in the movie theater shooting, but also sends a twisted message about the normalization of violence, potentially motivating copycats to act in the same manner.

In 2012, during a showing of “The Dark Knight Rises,” another one of Warner Bros. popular superhero movies, a gunman shot into a sold-out crowd leading to the deaths of 12 innocent people while wounding 70. Parents of one of the shooting’s witnesses wrote a letter to the movie’s production company after the release of “Joker” pleading that they use their platform and influence to fight against guns and the violence that follows them instead of shedding light to this particular topic with such disregard to the consequences they may carry.

Considering the fact that this film company has experienced prior conflicts with the topic of violence, it seems inadequate and unsympathetic for them to release this movie which discusses the sensitive topic so lightly and fails to express the harsh reality that these acts of violence lead to death.

After the film began to circulate in movie theaters, social media users sparked concern about the message being sent by the movie. This handful of comments quickly snowballed into the controversy that is now taking place as critics were quick to notice intricacies in the plot that sounded a little too similar to what is occurring on a regular basis in United States news.

In America, mass shootings by men like Arthur are occurring on a weekly basis; the movie “Joker” attempts to evoke feelings of sympathy and pity from the audience by insinuating that Fleck’s killing habits only came from lack of childhood love, all of which makes the situation much worse.

To begin with, after the horrible Aurora tragedy took place, Warner Bros. and Legendary Pictures donated an undisclosed sum of money to the Aurora Victims Relief Fund, which collected over two million dollars for the victims’ families.

To any ordinary person, this act would demonstrate extreme generosity from both companies; however, if one pays closer attention, neither company stopped the production of films with extreme violence as displayed with the new movie “Joker”. No amount of money donated to the organization would equal the life of the 12 people who died at the event and all those injured. In solidarity to the victims, the Cinemark Aurora theater decided against showing “Joker” in its entirety, but Warner Bros. should have taken initiative and removed it from the box office altogether.

“The movie itself has a very twisted plot and the fact that the writers want the viewers to feel sympathy for the Joker is even worse. It is almost as if they are trying to assimilate violent culture into our society” junior Sofia Rebull said.

Next, by developing the plot in the way they did, the writers of the movie are paving the way for copycat violence to take place. Ironically enough, James Holmes, the murderer at the Aurora shooting, painted his hair red in similar fashion to that of the Joker’s. This poses the question of whether he was inspired by the Joker, since the shooting took place during a Batman film.

The most worrisome thing about all of this is that a person similar to Holmes could potentially be out there on the verge of becoming a mass shooter. Instead of using their platform for the greater good and safety of society, Warner Bros. is using it to promote violence and make profit. This could all be easily reversed if Warner Bros. removed the film from theater temporarily to modify the triggering scenes.

Loyal fans of the Batman trilogy argue that the movie “Joker” is not promoting violence, but staying true to its roots of the Joker character that terrorizes Gotham. Warner Bros. went as far as to release a statement replying that the movie’s intention was not to endorse violence, but the art of storytelling sometimes involves difficult conversation about sensitive topics like gun violence. However, such a topic could have been approached from a different angle that not only would have stayed true to the storyline of past movies, but would have also respected the families of those lost in the movie theater shooting without glorifying murder.

“I am a huge fan of all things superheroes and Batman is no exception. However, after watching the movie myself, I was quite horrified by the gruesome acts of the Joker and now understand where all the criticism stems from. I am scared that someone will watch this and recreate the shooting in Aurora,” junior Irene Martinez said.

Out of respect to the victims families and the topic of violence itself, Warner Bros. should retract the film and modify the scenes of excess violence. Society should not have to fear that a person sitting next to them at a movie theater will recreate the scenes depicted by the film or gain ideas from it. Similarly to the Cinemark Aurora theater, other theaters should retaliate against the movie and not display in their facilities.