How Much Does Your Diet Affect Climate Change? 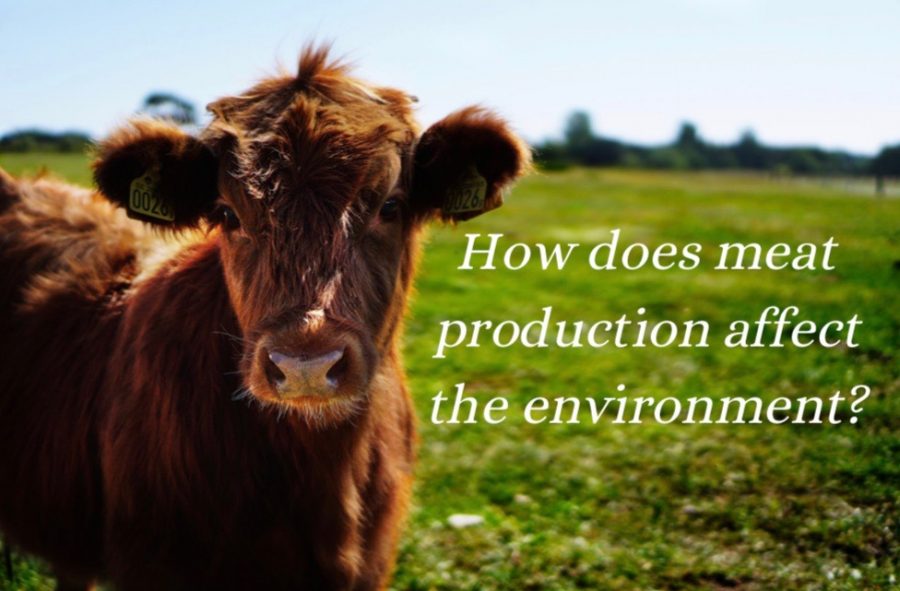 Meat consumption has a massive impact on climate change, and it is growing more and more evident by the day.

Whether it is chicken, beef or pork, meat is practically in every American meal, and in the past few years, a new wave of people have chosen to be pescatarian, vegetarian or vegan for a multitude of reasons. These ever-increasing trends prompt a crucial question: exactly how much of our actions, even those as measly as the food we eat, affect the Earth?

Recent studies have shown that, because of current systems, human meat production is directly correlated to climate change. In the present day, it is becoming increasingly evident that people should consider eating less beef or cutting it completely out of their diet as the current mass production system of these food sources have drastically increased the levels of pollution, greenhouse gasses and deforestation on our planet.

To begin with, the climate is known to have fluctuated throughout history. However, the current climate crisis indicates that our situation, which is due to human interaction, is the most severe that it has ever been. About 30 percent of U.S. greenhouse gases, which contribute greatly to climate change, are the result of mass meat production. To continue, 18 percent of greenhouse gas emissions are caused by animal agriculture, while 51 percent of them are due to livestock and their byproducts.

The three main greenhouse gases released into the atmosphere through meat production are carbon dioxide, methane and nitrous oxide. These gases stay in the atmosphere for a long period of time, warming Earth and further contributing to climate change.

In 2016, a report by the University of Oxford stated that if everyone went vegan, then greenhouse gas emissions would drop 70% by 2050. This is because vegan food production does not require cattle to be fed massive amounts of grain and water, which wastes resources and releases greenhouse gases during a cow’s digestive process. Since vegan diets are connected to lower levels of greenhouse gas emissions, you should choose to eat fruits, grains, and vegetables as alternatives to beef. It is evident that humans need to decrease their average meat intake or the effects of climate change would continue to worsen until it causes the end of life as we know it.

“Although meat production is harming our planet, I would not change my diet. I believe there are other ways I can make a positive impact on the environment without having to alter what I normally eat. People could donate to foundations that are helping our planet and encourage our government officials to pass policies in favor of the environment. The majority of people will continue to eat meat regardless of what its effects are to the environment,” sophomore Tara Fitzgerald said.

In addition, farming and grazing of livestock are the industries that contribute the most to deforestation. For example, about 65 to 70 percent of all deforestation is caused by Brazil’s meat production. Many countries import meat from there, and the government chooses to put money over the needs of the planet. To continue, almost five percent of the Peruvian rainforest has been removed for meat production, and by 2030, the Peruvian Amazon is expected to lose 10 percent of its forests.

The massive meat production in these areas has caused new agricultural techniques to arise. For example, slash-and-burn agriculture is a technique in which trees are cut down and then burned to make it easier to clear forests for meat production. Slash-and-burn is responsible for the loss of around 50 acres of land every hour worldwide and the increase of greenhouse gasses. The lack of trees on our planet means less photosynthesis takes place and we can no longer remain carbon-neutral, causing more carbon dioxide to stay in the air and amplify the prominence of climate change in our society.

“Unfortunately, high-meat diets affect the environment due to the production of these animals and the chemicals that are used to be able to have our mass-producing systems. Our diets are sadly having an impact on the climate and are changing the way our Earth was. I honestly would consider changing my diet to help support the environment and I encourage others to try too,” junior Jared Hernandez said.

Some people might argue that the meat is already dead, so they might as well eat it. They believe that it will make no difference, especially since if they stop eating, others would not and that they could just help the planet in other ways. However, if you, as a consumer, do not purchase the meat that these providers sell, then that means there will be less demand. The less demand, therefore, makes it less profitable.

For example, Brazil would not focus so much on exporting beef to other countries if the demand decreased. If people start buying vegetarian options, it will force companies to follow suit and partake in more sustainable vegetable agriculture. Plus, reducing your meat intake would not only help the planet but also reduce your risk of getting heart disease and could also allow you to lose weight. If every person does their part, we as a whole could make our world healthier.

It is impossible to expect everyone to cut out meat from their lives. However, it is ignorant to know how much humans are affecting the planet and not do something about it. It is up to us to do everything in our power to choose the smartest path and try to alter our food choices to minimize our impact. Even if you do not cut it out completely, eating less meat still makes a difference; we should think of the future and how we would continue to survive if our only planet is uninhabitable.

These efforts would not only help stabilize the environment, but also help your individual health. Humans as a whole need to stop valuing things such as money and provide comfort over the Earth. Doing everything in our power to help the planet must be a priority to everyone, especially if they wish to see their children have a bright future on this planet.