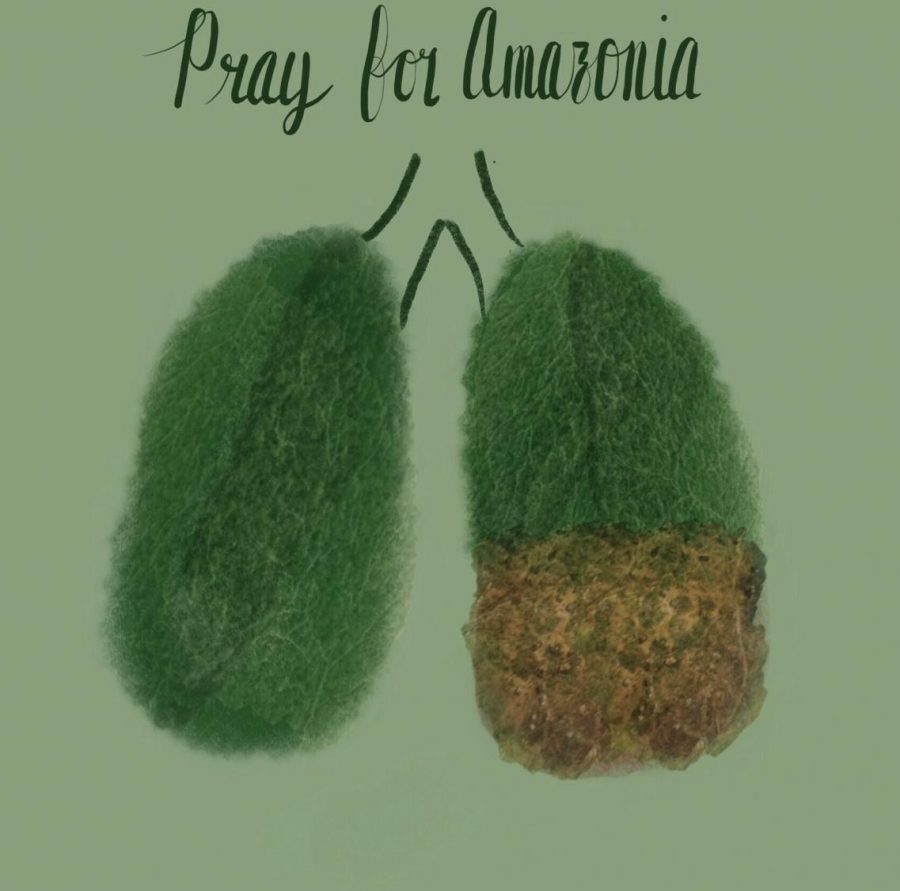 The Amazon rainforest is one of the most important ecosystems on the planet and it is time that we take action in keeping it alive.

The Amazon rainforest is a tropical rainforest that covers 5.5 million square kilometers of the Amazon basin of South America. Often referred to as “the planet’s lungs”, the Amazon is responsible for producing roughly 20 percent of the oxygen in the atmosphere.

Natural fires in the Amazon rainforest during the dry season are not uncommon. However, the massive fires occurring currently are not natural. The high demand for human necessities has been taking a toll on our planet and, unfortunately, there is not enough media coverage.

Humanity as a whole needs to take a step back and realize the damage we are doing to the world. Media outlets need to cover these fires because they are man-made flames that are permitted by the Brazilian government, and it is causing us to drain our Earth of its natural resources. By changing our interactions with the planet and living sustainably, we can reverse some of the damage that has already been done and prevent tragedies like this from recurring.

The Amazon rainforest has yearly natural fires due to the lack of rain during the dry season. However, the recent fires are man-made and have risen by an astonishing 80 percent this year, totaling to 72,843 fires this year alone. The fires have even spread 3,800 acres to Bolivian soil, and the Brazilian government has deployed firefighters to put out the flames. They can put out small fires and potentially prevent new ones,  but the larger fires can only be put out by rain. All of these consequences are the effects of the Brazilian president, Jair Bolsonaro, allowing the mass deforestation in order to bolster the country’s economic prosperity. His actions were based on his belief that the environment does not need protection and his disrespect towards indigenous communities.

Humanity’s high demand for necessary resources have led to catastrophic results. Logging, agricultural practices, cattle ranching, mining, oil extraction and dam-building are all examples of ways humans abuse the environment. The interactions mankind has had with the forest have affected Amazonian biodiversity and the air we breathe.

The most profound issue has been the practice of deforestation for cattle ranching. The meat consumption on a global scale has been steadily increasing over the years. The more meat that is consumed, the more cattle is needed to fill empty plates and the more space needed to raise the cattle.

Fire is a method used to clear out the land for farming or ranching. Cattle farmers are the biggest cause of the Amazon’s deforestation, and they are responsible for the bulk of the loss of forest coverage. In Brazil specifically, 80 percent of beef is consumed domestically and, if the media covered how beef consumption is one of the biggest causes of deforestation in the Amazon, more people would be informed and the situation that we are in would not be as drastic as it currently stands.

“I think that people have been raising awareness, which is good but action is more important. Meat consumption plays a big role in what is happening in the Amazon and in the world. If you really want to make a difference, people need to know what they are eating and how it gets to their plate,” sophomore Isabella Guerrero said.

Deforestation leads to increased carbon dioxide emissions, soil degradation and the destruction of diverse wildlife. The wildlife that resides in these rain forests are part of a dynamic, interconnected food chain; each organism has its own niche, and they all depend on each other to survive. If the homes of even one of these species are destroyed, the entire ecosystem is at risk of toppling over.

When trees are cut and burned, the stored carbon is released as carbon dioxide into the atmosphere, becoming one of the biggest contributors to global warming, alongside the abuse of nonrenewable resources. The soil that is used for cattle ranching and industrialized agriculture loses value after years because it is used over and over again, meaning that when soil erosion becomes so bad to the point of being nearly unusable, farmers move to a different plot of land and cut down more trees to make space; it is a never-ending cycle. On a global scale, we are draining the Earth’s natural resources faster than they can be replenished. Therefore, in the future, we will not have enough to support the planet’s exponentially-increasing population.

The Amazon has been burning for the last 16 days. There was no media coverage at all and no one was aware until civilians began speaking out. The faster the press spreads the word, the more people can help. Amazonia shelters 10 percent of the world’s biodiversity, and it requires out attention and support.

On Apr. 15, 2019, when the Notre Dame Cathedral in Paris burned down, the whole world was on its toes. Billions were donated to aid in restoring the 850-year-old church. Although the church offered an abundant amount of history and sentimental value, it was just a building. The Amazon is vital to humans and the animals who live in it. Now that it has made headlines, many influential figures have spoken out. Disasters like these will soon affect our everyday life and, as a planet, we need to put an end to the damage or it will become eternally irreversible.

“I think that the Amazon burning is just a combination of multiple negative factors. The main problem is the droughts occurring there and human interactions, like deforestation, are most likely making it worse and more common,” sophomore Hayden Hohman said.

Some people may argue that the Earth will rehabilitate itself, just as it does when there are natural disasters. Although that might be true for naturally occurring incidents, the fires that are happening right now are unnatural and causing damage that is beyond our control. Natural disasters like hurricanes, tornadoes and earthquakes are all damaging the planet in one way or another, but when it does not have time to heal, there is no way to reverse that damage. When human beings do not live sustainably, it damages the organisms around them, eventually coming back to hurt them as well. If you take too much from something, there is eventually nothing else left to give. Yes, the Earth will restore eventually, but that will only happen long after mankind is gone.

People should be educated about what is happening in the world. The more people are educated, the more positive change can occur. On an individual level, you can help this crisis by donating to the Rainforest Action Network and other reliable organizations like them. Other ways of helping without spending money are reducing your paper use, watching your beef intake or using the search engine Ecosia that plants a tree for every 45 searches you run. Spread the news throughout your community, as this crisis affects humans on a global scale. We have one planet, and we should nurture and appreciate all the beautiful things we obtain from it.