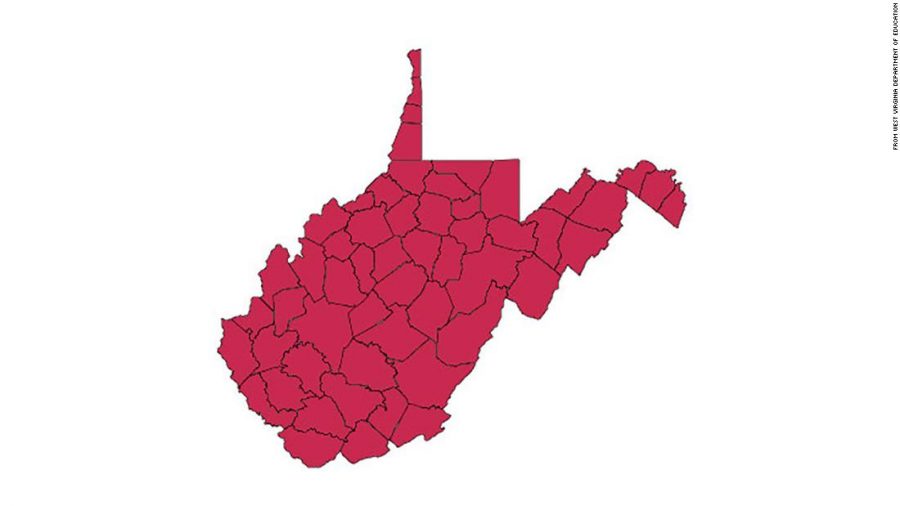 The districts in red display where all schools in the district are closed.

Starting on Feb. 22 of 2018, teachers across the entire state of West Virginia began a strike that would last for more than a week, resulting in the closing of every public school in the state. All of this was caused by the teacher’s simple request for a 5% increase in their pay, which was not received well by the state legislature. The strike and the reasoning for it were completely justified. There are many teachers that live paycheck to paycheck on the basic teacher’s salary. It is even more difficult for them because of increases in insurance prices and other programs related to insurance that seem to be both arbitrary and invasive.

The average pay of a teacher in West Virginia is $44,000, about $12,000 below the national average of $56,000 per year. The proposed wage increase of 5% would bring the average salary to about $46,620—which is still only a 2,620 dollar yearly increase, but is a step in the right direction. While the increase was approved by West Virginia Governor James C. Justice and the State House, it has stalled in the State Senate and is unlikely to be passed until something changes, be it the proposed wage increase or in the Senate.

In addition, recent changes to insurance costs made insurance 600 dollars more expensive per month. With a family insurance plan, the policy changes required families to download an app called “Go365,” which tracks the steps taken by an individual and reports them to the school district. If an individual chooses not to use the app or falls short of the step goal, they are fined 500 dollars. This is 500 dollars that people, who are already not making much money as it is, should not have to spend. Additionally, this app is something few people are actually able to afford, making it disadvantageous for the majority of people. This program was quickly revoked and insurance rates were frozen in an attempt to appease the teachers and avoid a strike; however, it was not enough and the strike took place anyway. Due to how little teachers were paid in the first place and the poor treatment of the teachers in terms of benefits, the strike is completely justified.

“The way the teachers are being treated, especially with what they did with the step tracking app, is awful and it’s great they went on strike,” junior Quetzalie Pizarro said.

While some may say that the strike is not justified because of the time students will lose out of the school year, the days missed due to the strike will be made up from the summer break. Some people have said that the shorter vacation could negatively impact students, but studies have shown that long summer breaks are actually detrimental to the students overall; so the shorter summer would actually be beneficial to the students’ education. In addition, those who say the state is unable to pay for the increase are unjustified in saying so because the well-being and proper paying of teachers should outweigh other costs West Virginia has.