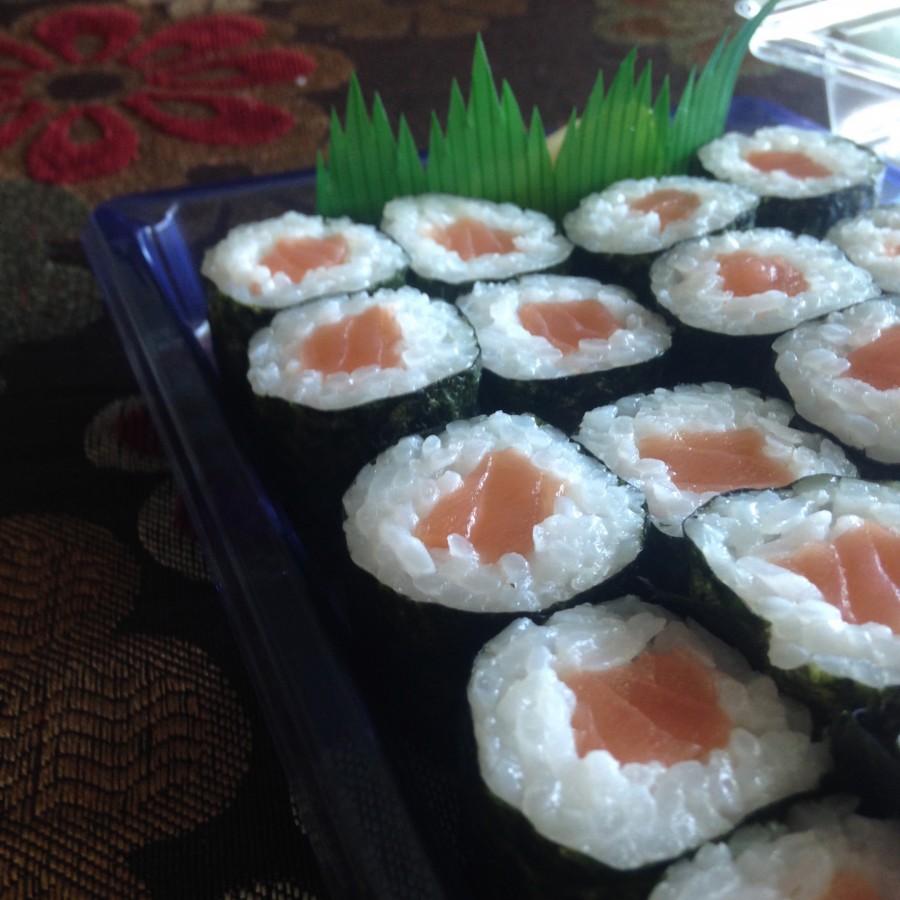 Sushi is an irresistible treat for some, but to others, it represents an unhealthy meal.

Our current society seems to be fixated on the things that are and aren’t good for us. However, there seems to be a problem; everything appears to be unhealthy for us- even sushi.

Those who enjoy sushi have probably heard comments such as such as “you will get mercury poisoning” or “you’re eating raw fish? You’ll get Salmonella!”. Although these comments seem irrational, they do hold some truth to them.

“I am aware that concerning levels of mercury have been reported in the fish we eat, however I think it doesn’t require us to completely stop enjoying our preferred foods,” junior Juan Salazar said.

Sushi is usually made with rice and raw fish arranged into a tightly packed roll. Raw fish is usually considered dangerous to eat because it may contain a parasitic roundworm called Anisakis Simplex that uses the human gastrointestinal tract as a host. Other types of organisms that may reside in raw fish include bacteria suchs as Salmonella and Vibrio Fulnicus-both of which cause infections that may be deadly.

“[I do consider the posibility of a bacterial infection when eating sushi] But if you look at what cows and other livestock are fed today, you’re ‘at risk’ pretty much all the time – cows are now fed a diet with fish and fish oil,” senior Lucy Baez said.

Cooking fish does not seem to end the problem to the sushi controversy. Fish is one of the foods that is highest in methylmercury content. Mercury, a heavy metal, is highly poisonous and when ingested in high contents may cause headaches, nausea and muscle spasms among other symptoms which you can read about here. Mercury is released into the atmosphere when fossil fuels like coal and oil are burned and as a byproduct of the mining and waste incineration industries. Like most gases, Mercury is dissolved in the ocean’s water and is then transformed into a more poisonous kind of Mercury-Methylmercury- which is then absorbed by microorganisms that are eaten by fish.

As scary as bacterial and Mercury poisoning may seem, they are not highly likely to occur when eating sushi. The chance of getting a bacterial poisoning can be reduced by always storing raw fish in a refrigerator and always washing it thoroughly prior to consuming it. Mercury poisoning is also unlikely since the quantity of Mercury in fish is so small that it will likely not cause any harm. Also, you can choose to eat fish that is low in Mercury such as these.

“Sushi is healthy to a certain extent. I mean everything is healthy in moderation, too much sushi can expose one to many things such as bacterias and mercury. But in my opinion sushi is so delicious and so amazing that the risk of getting mercury poisoning is a risk worth taking,” junior Raul Godoy said.

Whether you choose to eat sushi or not, remember that everything we eat has the potential of harming us. Everything must be handled with moderation. If sushi is eaten from a reliable and clean place and eaten sparingly, you can be sure you will not encounter any complications with Mercury or bacterial poisoning.