The FDA and Monsanto: A Love Story 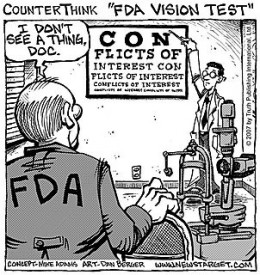 Political cartoon satirizing the oblivious nature of the FDA towards the conflict of interest.

Monsanto is the largest seed manufacturer in the world. Starting out as a chemical company, Monsanto worked alongside MIT to create genetically modified seeds, which they claim save the world. However, the general public has a primarily negative view of Monsanto, and for good reason.

There have been countless reports of sketchy Monsanto lawyers following farmers around and eventually suing them for having second generation seeds, although there is overwhelming evidence that the wind blows the seeds from neighboring farms. Building a monopoly of farms is slowly putting small-self sufficient farms out of business. Monsanto has also been purchasing the rights to freshwater aquifers and groundwater (almost 10% of the world’s freshwater supply is already privatized), which is slightly dangerous considering that freshwater has always been a public thing.

Monsanto seems to be completely unrestricted by the Food and Drug Administration (FDA), and this may be because of the extremely close relationship between the two groups. Here is a short list of the many conflicts of interest present in the government:

Clarence Thomas, a Supreme Court Justice, used to be a Monsanto lawyer.
Anne Veneman, the U.S. Secretary of Agriculture, was on the Board of Directors of Monsanto’s Calgene Corporation.
Tommy Thompson, the U.S. Secretary of Health, received $50,000 in donations from Monsanto during his gubernatorial campaign in Wisconsin.
Larry Combest, Chairman of the House Agricultural Committee, and John Ashcroft, the Attorney General, were the two congressmen receiving the most donations from Monsanto during the last election.

Although there are those with negative views of the company, Monsanto is viewed positively by some, due to it’s great impact in the genetic modification of seeds, and because of it’s ability to lower the prices of foods for consumers. But Monsanto’s multiple instances of a skewed moral standpoint make it unacceptable for the FDA to maintain such a close and beneficial relationship with Monsanto.

“I don’t think [the relationship] is okay at all. It makes it even worse that so many people are unhappy with Monsanto and the ties that the groups have are widely known,” senior Maria Picardi said.

The ties that the FDA has with Monsanto, a relationship that should be filled with limits, is quite the contrary, and is absolutely a conflict of interest. While there are no laws that limits this sort of relationship, and it would be almost impossible to create any, one’s decisions in the US government would obviously be skewed if an official used to work for the company that should be limited. An obvious injustice is taking place before us, but with America’s trust-based legislation process alongside a growing population of people with a complete moral disregard, nothing can be done.