Electric Cars: Cars of the future…and the past? 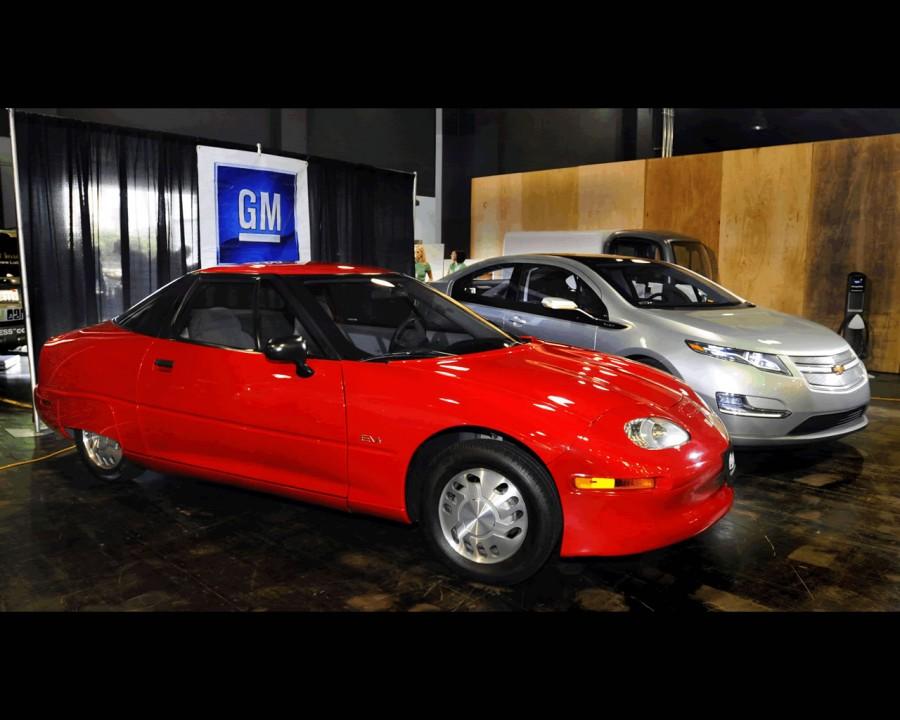 The 1998 General Motors EV1 alongside the fairly recent Chevy Volt

When people wonder about what the future of technology will look like, most imagine hologram televisions, fancy smartphones and electric cars. While “green” technology is certainly getting more and more popular, many do not realize that electric cars are actually a thing of the past.

In 1998, California experienced an environment hazard, involving large amounts of smog and air pollution, that resulted in policies in which motor companies were required to have a certain quota- 2 percent- of electric cars. The mandating of electric cars would have only positive effects in the eyes of the Senate, including less of a necessity for foreign oil and the creation of a new domestic industry which brings jobs and revenue. General Motors created the famous EV1, an electric car with a range of 80 miles off of one charge, Solectria Corp created the Geo Metro (50 mile range) and Ford created the Ford Ranger Pickup (65 mile range). With the creation of this technology, many Californians rushed to purchase the new innovations. By 2003, the Senate mandated that 10% of the total amount of cars sold by motor companies must be electric. But then, the car companies decided that this innovative, green technology was not a good business direction for them, and were enraged by the mandatory laws. This caused the car companies to take measures in an attempt to discontinue the cars.

Customers could not buy the cars, but could only lease them. Questionnaires and resumés were filled out for potential customers, and even celebrities like Mel Gibson had trouble getting his hands on an electric car. Car companies joined together and campaigned against the laws, and simultaneously used questionable and unique strategies to advertise the cars, including elderly women’s voices being used in commercials, rather than attractive young women’s. Oil companies such as Exon-Mobil, predicted the negative effect that an electric car industry would have on their business. They created fake “scientific” groups to spread wrong information about the cars, claiming that they are bad for the environment, in an attempt to take the new technology out of the limelight.

Oil companies have great influence over the government, with their revenue equaling more than 10% of U.S. Gross Domestic Product. It comes as no surprise that after enough lobbying from the far too powerful car and gas industry, the Senate overturned the law mandating that each company releases electric cars, and most electric cars were recalled. Many models were permanently discontinued, and even though customers offered over 1.9 million dollars to keep their cars, they were destroyed. Stan Ovshinsky created the NiMH battery, which worked much better than previous electric cars, and was used in a car that traveled 300 miles at 70 mph on a single charge. The Chevron-Texaco company, along with other oil companies bought this patent, and never used it.

“I think the car companies’ actions are bad for the earth, but good for business,” senior Bryan Corrales said.

The replacement of gas guzzling engines with electric cars would start to solve many issues, including political issues over oil in the Middle East, and environmental issues of air pollution and climate change all over the world. While this corruption has already taken place, lessons can be learned so that these same companies are unable to use their power to disregard what is best for the planet in order to fill their wallets, for the second time.