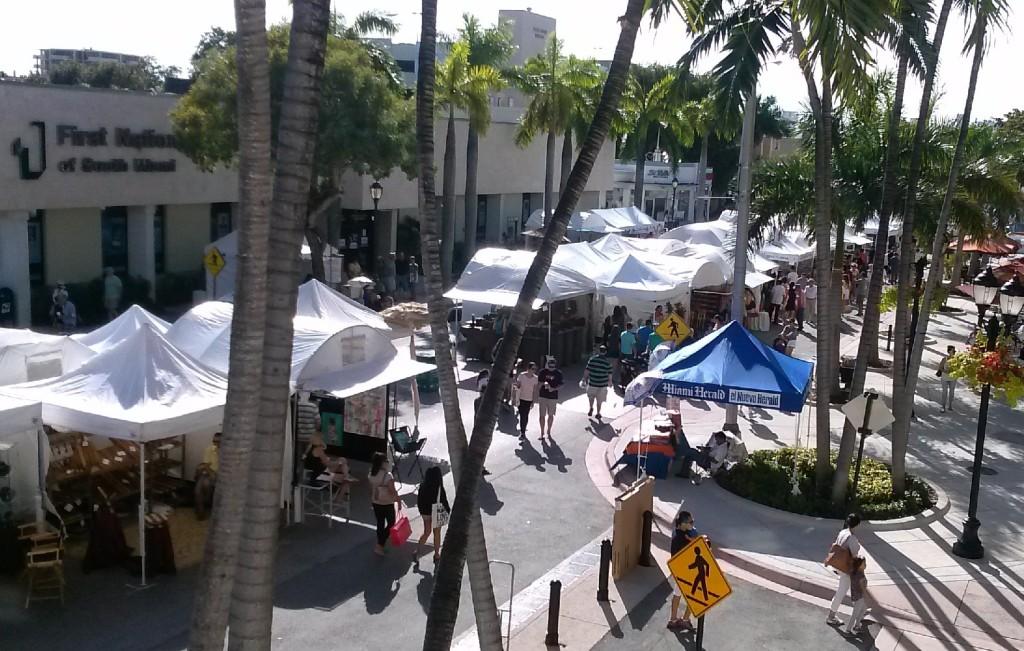 The festival brought over 150 diffrent artists together.

On February 22, the South Miami Rotary Art Festival celebrated art in its many forms at Sunset Mall in front of the movie theater and between Red Road and US 1. The festival lasted from 12:00 PM all the way to 6:00 PM, even though some exhibitors stayed behind longer. It featured an extraordinary variety of local and foreign artist, all of whom worked in different mediums. The festival brought over 150 booths of fine arts and crafts from around the globe, some as close as Miami and Naples, and others coming in as far as New York, California, and Canada. It brought artists together whose heritages and cultures expand across the globe.

It was a beautiful, sunny Floridian day, and particularly warm for February. The booths were lined up as far as the eye could see, nestled between the soaring palm trees. The festival welcomed both those who were looking to purchase crafts or art, and those who were just window shopping. Almost all of the artists worked in different mediums, and no two artists were alike. These ranged from glasswork to painting to jewelry to mixed medium, and from photography to sculpture and every other stylized shade of art in between. The artists’ techniques ranged from classical to contemporary. The entire festival was a feast for the eyes, everywhere you looked you were bound to spot another piece of distinct art.

One could easily spend the entire day here. Some artists were hilarious and ecstatic, while others were deathly serious. The artists’ personalities and histories reflected in their artwork; it was easy to see the effects of their cultural upbringings and heritage on the art they produced. Many artists displayed styles from different countries, while others displayed a combination of them. It is fantastic to see so many different techniques coming together in new ways (often in forms you would least expect).

In addition to the art, the festival also had a delicious amount of multi-ethnic food available. Just like the art, its cuisine selection was international. It was common place to see people walking around a refreshing frozen lemonade or piña-colada served in the pineapple, and munching on a deep-fried funnel cake or grilled kabobs. If the fair didn’t hit the spot, then there were plenty of restaurants in the mall and surrounding shops to satisfy the pickiest or hungriest of eaters. The live music added warmth and life to the atmosphere. The jazz was perfect for the mood. All around were families with children enjoying the culture Miami has to offer.

Profit from the festival will help fund Rotary Club of South Miami and its Rotary Foundation, and proceeds will go to scholarships for Miami’s students, book giveaways for schools, and other local, national, and international service projects. The fair was just about three miles from Coconut Grove, and it bordered UM. Coral Gables is just a few minutes away, and it was in front of the metro rail for easy access. The fair will return next year so if you are looking to spend some time looking at art, then the art festival is a place you should definitely look into.