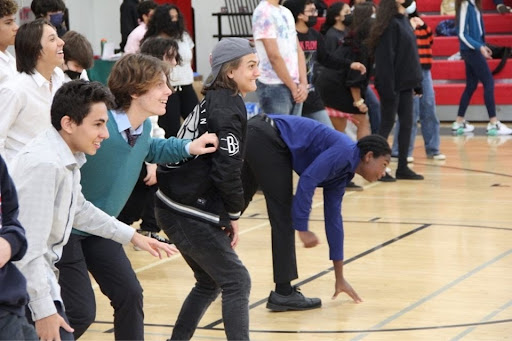 Students playing an intense game of Red Light Green Light as they try to make it to the other side of the court without being caught moving.

Bringing the classic Monopoly game to life, the National Academy of Finance hosted its annual Mad City Money event. In this simulation, NAF aims to give freshmen and sophomores a taste of life post-high school by giving students control over their assets, clothes, food and vehicles. Hosted on Dec. 10, the goal of the event is to educate underclassmen on smart purchases and financial literacy.

NAF students began arriving in the gym at 7:30 a.m., where they first signed in to play and were then each handed a scenario card of their game lives. On these cards, each player was informed of their monthly salary, spouse’s monthly salary, number of kids and debt owed.

Based on the information given, competitors had to budget their expenses while also making sure to purchase one item from all 12 tables set up. By the end of the game, each underclassman was supposed to have at least $100 left.

“We always want to give students the chance to gain real-world business skills in school and this event highlights our ability to offer that to our students,” Mr. Reisert said.

The gymnasium was set up with student-run tables, each station having a designated expense that mimics both real-life necessities and wants that entice players to pay more than they could afford. Students also had to beware of “unexpected costs” as select participants were tasked with passing around cards that would force players to pay a fee at the bank.

When players found themselves in a tough spot financially, they were given the opportunity to learn about and participate in investing at the stock market table. There, they were able to put in a fixed amount of money and wait through a series of randomized slides which indicated if the stock they invested in gained or lost value.

Following each transition of the slides, the heavy cheers or roaring boos could be heard from the eager student investors.

“The stock market was my favorite table because it was the only source of income in the game, but we were given a brief lesson on the dangers of gambling and the consequences of overdoing it,” freshman Daniel Pozo said.

At the end of the event, students were allowed to vote on their favorite station. Winning in a 29 to 17 landslide, the participants voted the stock market table as the fan-favorite, with the house decorations table following in a close second.

After the main event, the AOF board and students gathered together to play regular games such as red light, green light, head shoulder knees and cones, mummy wrapping and musical chairs as they waited for their lunch.

“Mad City Money is a great event because it really makes you think about what you really need and don’t need when making a purchase. Especially since the only form of income was at the stock market for everyone,” senior Alejandro Delgado said.

Although the money gained and lost during the Mad City Money event was make-believe, the real-world lessons learned from the simulation gave NAF students a sneak peek of what the future holds for them as they continue to learn how to support themselves financially.