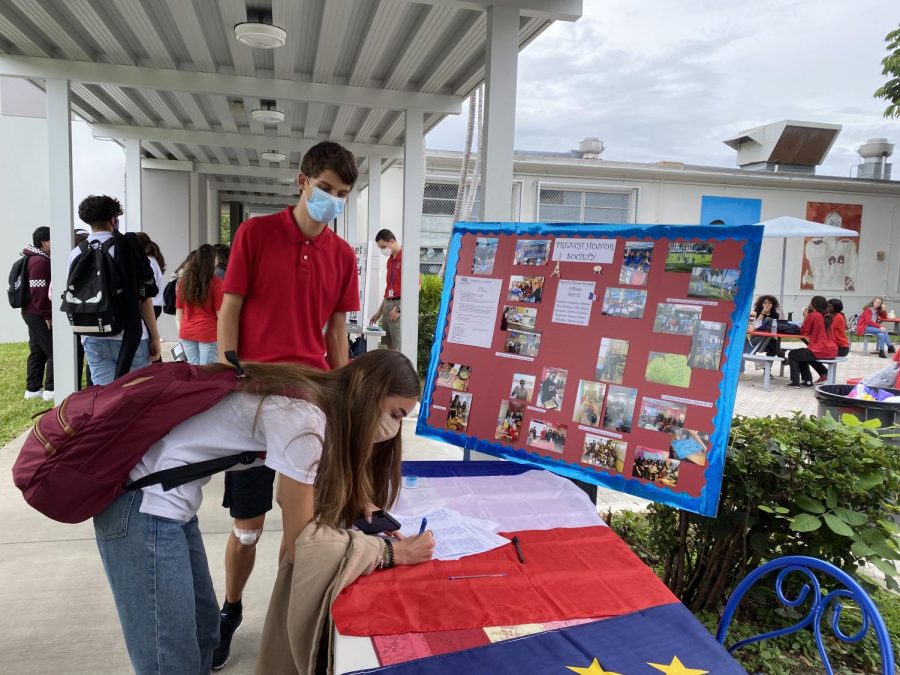 Students sign up for clubs through Google Docs or by sharing their information on written forms such as the one created by the French Honor Society.

This year’s Club Fair, an event that is held annually in order to allow students to explore and join the different clubs the school has to offer, was held in the outdoor courtyard in front of the 6000 building. Students were able to tour the various booths set up at the fair from Sept. 21 through Sept. 23 during both lunches.

Club Fair was physical this year, compared to last year when it was held virtually due to a large number of students attending school via zoom. Back in 2019, the club fair was held in the gym because of construction in what is now the 6000 building and the new courtyard.

“In a really long time, this was one of the first events that really reunited the student body and emphasized the presence of great school spirit at Coral Gables High School. The school hasn’t really had a single event where all grade levels and academies were centered in one area, in this case, the club fair did,” sophomore Amalia Garrido said.

In order to sign up for the different clubs offered, students had to either fill out a paper or scan a Quick Response code linked to a Google Doc. All the clubs had informational posters explaining how they are unique in what they can offer Cavaliers. Some stand set up interactive activities such as spinning a wheel of fortune, and treats were given out.

“I liked how all the clubs had their own stations in a row so you could walk down and see all of them. I think the club fair is a good idea for students to be able to see what clubs they want to join,” sophomore Veronica Montalvo said.

On Tuesday, the clubs in attendance were Andrea Jaime Medical Leaders, Quill and Scroll, Chess Club, Cheerleaders and the Italian Club. Additionally, all the honor societies were present, which included the Science, English, French, Spanish, International Baccalaureate and National Honor Society.

On Wednesday, social and political clubs made their debut. On-campus were representatives from Best Buddies, Future Educators of America, Gables Earth, Health Information Project, Interact and Key Club. The Political Activism and Civic Engagement, The Garden Project, Level Up, Gay-Straight Alliance, Gables Players and Police Explorers also made a statement by attracting students to their booths.

Gables students should keep in mind that there is a mandatory fee that can be paid through Online School Payment, a platform that can be accessed through the student portal. Most clubs require this fee to help pay for the equipment needed throughout the year.

Over its three-day span, the fair was a busy event that attracted crowds of Cavaliers eager to sign up for the clubs of their choice. Even Principal Ullivari encouraged students to join clubs when he stopped by the fair. For those who missed the fair, multiple clubs have already posted a link to sign up in their Instagram biography.