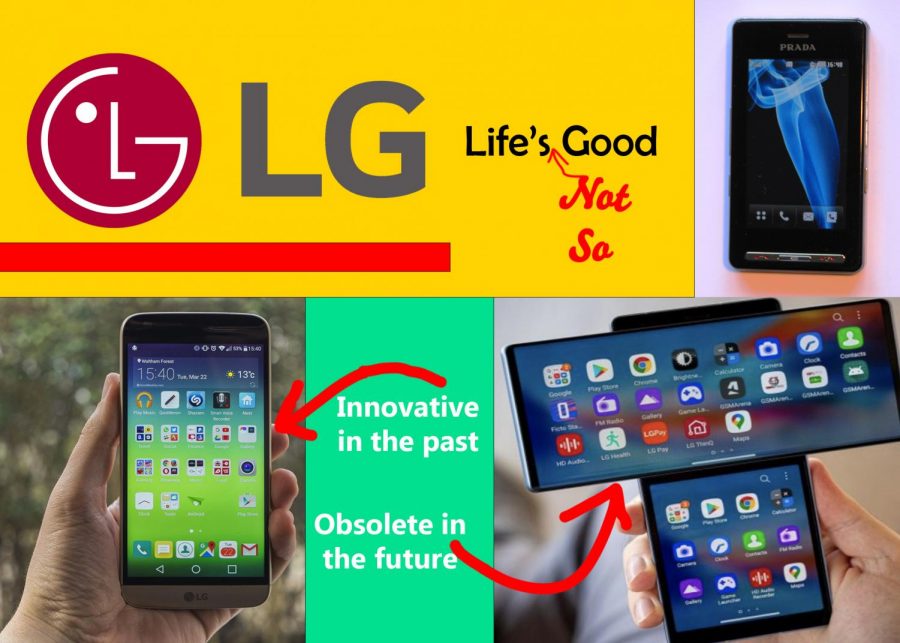 Former smartphone juggernaut, LG, is shutting down its mobile division, leaving many to wonder: where did it all go wrong?

Iife’s Good electronic company is shutting down the production of their mobile phone line due to their loss of popularity in the face of brands like Apple. Although most cellphone-owning consumers no longer use LG phones, the company paved the way for many innovations that are found in today’s more popular flagship phones.

LG’s recent lineup of phones, such as the LG Wing 5G, caught the attention of many in the tech world. The Wing is unique for being a dual-screen phone. Unlike other dual-screen phones, however, the Wing’s screen’s are stacked on top of each other in the base orientation, and the screen on the top can slide over the other to form a T shape. Although critics deemed the design impractical, it exemplified LG’s mobile phone division as a company.

Many of their past designs and innovations are considered out of touch by the public. However, over time their additions to their phones in the past have become norms for many flagship phones today. For example, LG came out with the first capacitive touchscreen in 2007 with the LG Prada. Almost every phone made today has adopted this feature. The LG Optimus 3D became the first phone with two cameras, a feature common on most mid to high-tier phones made within the past two years.

“Some of these advances that LG made that I could not imagine my phone without,” sophomore Jon Trueba said.

Another example of the companies’ pioneering was seen with the LG G5, the first phone with an ultrawide camera. Almost every smartphone flagship has an ultrawide camera in 2021, and that is for the most part, this is thanks to LG. These are not the only innovations made by the company, as LG created the first phones with multiple cores, quad High Definition displays and three rear cameras along with other advances.

The shutting down of LG’s mobile division was a simple case; the company was not able to justify the means of production. With all of these innovations that ended up catching on, there were many things that LG threw at the wall that did not stick. Examples include curved phones and phones that contained modular attachments. The LG G8 was even a phone that would unlock reading the veins in the user’s hand.

None of these inventions caught on partially due to the fact that in most cases, they did not work the way they were intended to. The curved phones ended up annoying users, while the modular system was dumped by LG themselves a year later and the G8’s vein unlock system also faced issues. This continuous problem of underperformance combined with ineffective marketing led to very poor returns for LG to the point where it is closing down its mobile phone division.

Although the news may have been saddening for loyal LG customers, it was ultimately not unexpected for what was once the industry leader in smartphones. Regarding the future of the company, one never knows what may happen. Perhaps Apple will copy the design of the LG Wing and then it will catch on.