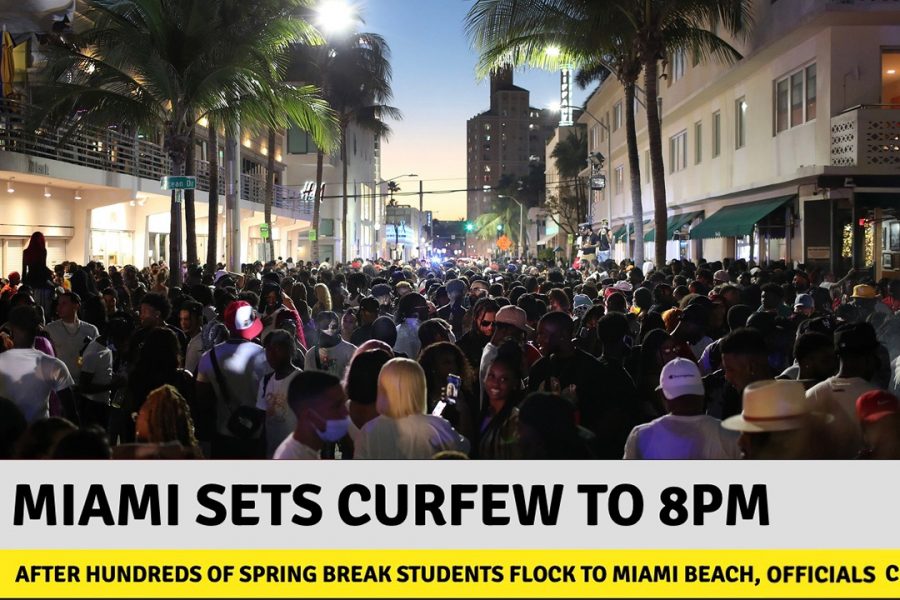 Spring Breakers have descended upon Miami again, but are they welcome?

Spring Break is usually a fun-filled time for everyone. Especially in Miami, people enjoy exerting their freedom during this time by going out to eat or tanning at the beach. However, as many have learned during this period of COVID-19, these usual opportunities may not always be an option. So was the case when Spring-Break partiers came to Miami Beach but were met by strict restrictions to harbor the spread of COVID-19.

Many younger adults came to Miami in hopes of enjoying their Spring Break in South Beach. With that said, a large amount of these people have disobeyed and disrespected local pandemic guidelines. The local police reportedly made over 1,000 arrests in one night, in which 400 of those arrests involved felony charges. Officers were also dispersed in riot gear on Saturday in order to aggressively control the groups of people.

“From what I can tell, these people seem to be a nuisance to the police because they have to do their jobs all while maintaining and abiding by COVID-19 regulations,” sophomore Bryan Guillen said.

Stations such as 7 News have reported sights of thousands of people crowding the streets and partying. These instances, of course, are creating the potential for more super-spreader incidents, where the Coronavirus is spread between partiers and in some cases taken back to the city they have come from to spread further there. To prevent this from happening again, the City of Miami Beach instituted a curfew from 8 p.m to 6 a.m. This curfew is in place for four nights a week, from now until April 12.

Before the curfew was initiated, however, a very unfortunate incident occurred amongst the crowd of the Spring Breakers. Two men from North Carolina allegedly drugged and sexually assaulted a woman in a hotel on Miami Beach. When they realized that she was unconscious, the men then went on to steal her credit cards and use them to further indulge themselves in South Beach. The situation worsened, unfortunately, as the woman was found dead in her hotel in the morning. Situations such as this one merely increased the demand by locals for the measures taken by the City of Miami Beach.

“I understand people wanting to have fun and get out of their houses for at least a day but drugging and assaulting someone is completely out of line, especially if you are not even from Miami,” sophomore Jeannette Perez said.

Spring Break partiers have descended upon South Beach potentially at the expense of reducing the spread of Coronavirus. The City of Miami Beach has acted on procedures that have put themselves under criticism as many have complained that the curfew was too strict on young adults who were just trying to have fun. However, some of these precautions are seemingly justified, as spring break vacations were a factor in the boom in Coronavirus cases last year.