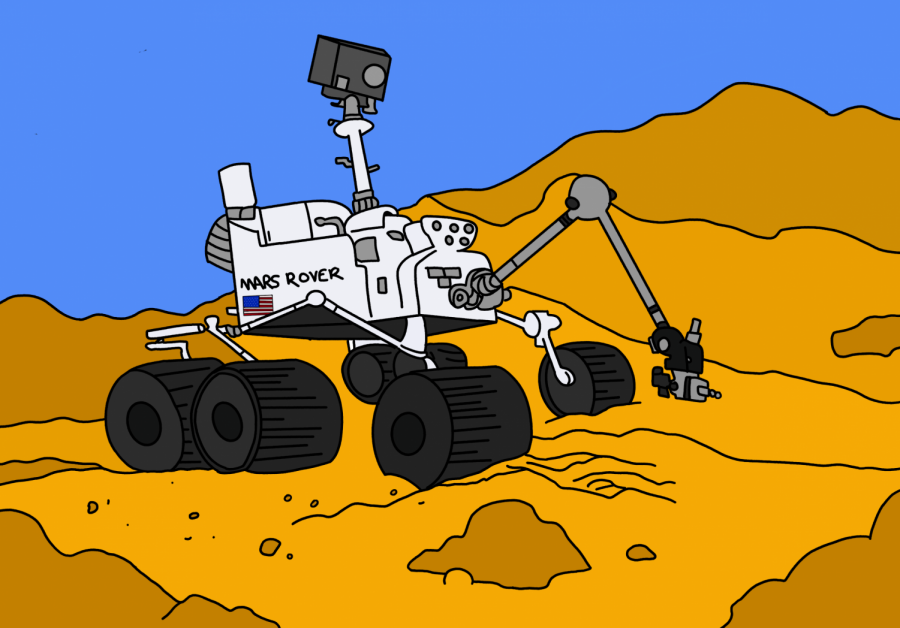 The Martian Rover, Perseverance, has successfully landed on Mars. The rover landed on Thursday, Feb.18.

In a mission that took almost seven months, the National Aeronautics and Space Administration has successfully landed the rover Perseverance on Mars. The rover landed safely on the surface of the red planet on Thursday, Feb. 18.

NASA observed the landing from where the rover was built in Pasadena, Calif. in their Jet Propulsion Laboratory. There, they monitored on-board systems and verified contact with the Martian surface. Around 2.5 million people watched NASA’s Youtube livestream alone, with hundreds of thousands watching the event on other news channel live streams. Spectators waited up to two hours before touchdown to listen to the NASA and JPL scientist who worked on the rover as he explained the process.

Perseverance’s main mission is to identify signs of ancient life that may have resided on the planet many millions of years ago. Being the most advanced robot ever sent to space, Perseverance is equipped with several drills to break up rocks and regolith from the surface of designated areas and place them in tubes for a possible return back to Earth for study. To demonstrate how these dills work, NASA created an animation.

Designated drilling areas include Jezero Crater, roughly 30.1 miles in diameter, which scientists believe may have once been flooded with water. The Jezero Crater shows signs of river deltas that may have arisen from continual surface runoff. The fan-delta deposit is rich in clays, a trend consistent with river deltas here on Earth. This is where scientists have determined life is most probable to have existed.

“I think The Jezero Crater is a promising site in the search of ancient life on Mars. The topography of the area demonstrates a possible, past fan-delta, a place where life would have thrived. Further exploration in the future will reveal the secrets Mars holds,” sophomore Ralph Sans said.

The mission command center in Pasadena was closely monitoring what has come to be known as the “seven minutes of terror.” This seven minute time frame is the most crucial to the rover’s voyage to Mars; determining whether the rover will safely land on the red planet or crash into it and be destroyed. Perseverance, like all the other rovers before it, is programmed to land autonomously. This is a result of the 12 minute delay in communication between Mars and Earth. This means that when the rover alerts NASA that it has reached the atmosphere of Mars and is descending, it will have already landed and met its fate.

From the atmospheric entry to landing, it takes seven minutes until the process is completed. When it first enters, the heat shield, located below the rover, absorbs the heat created as the rover decelerates from a speed of around 12,100 miles per hour. The rover then deploys a 70.5 foot parachute that slows the spacecraft even further from around 200 miles per hour. When the rover reaches only around 1.5 miles in altitude, the parachute is released and the backshell uses thrusters to gently bring the rover down. At 20 feet, the backshell releases by cable and finally plants the rover on the Martian soil. Lastly, the backshell flies a safe distance away from the rover with whatever remaining fuel it has left. For interactive animation on this process click here.

Although the rover’s main task is to find signs of ancient life, it contains interesting side projects that will be tested in conjunction with its primary objective. This includes the Ingenuity helicopter project, a drone-like flying machine that will survey the ground ahead of the rover to scout for the best possible route for the rover. Perseverance only moves at a few miles per hour so Ingenuity moving at top speed of 22.3mph will allow for quicker and safer navigation on the red planet.

The rover has 23 high-quality cameras meant to send images back to Earth. As soon as the rover landed it sent low-quality pictures meant for initial hazard assessment for the onboard computer. These pictures depict the red planet’s initial topography and even the landing process. Scientists at JPL demonstrated their relief and excitement on the news Perseverance had confirmed it landed safely, saying the experience was ‘exhilarating.”

As Perseverance sends back information to NASA and JPL, these organizations will continue working on future projects, including missions to retrieve the capsules of regolith the rover will leave behind. For now, spectators await for the rover to power up its audio and recording devices in order to get a clearer view of Mars.