Islands of Isolation-Oceania’s Own Parrallel Universe 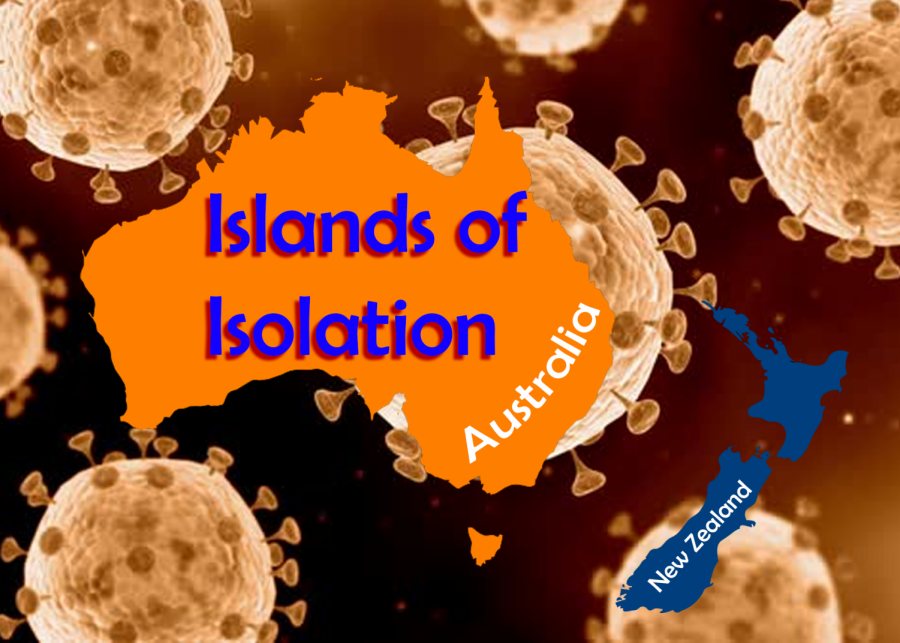 Australia and New Zealand have implemented initiatives that have allowed them to have extremely low case numbers. So what is their secret, and can we learn from it?

Though COVID-19 has pushed many countries to the brink of economic crisis, in Australia and New Zealand, strict regulations and lockdowns have created ecosystems where they are essentially living normal lives. Citizens of countries that are still plagued by the virus are left wondering what are these measures, and could they work elsewhere?

New Zealand has a population of five million residents. For context, this is around the population for the state of Alabama and the country of Ireland. With that said, Alabama currently has 438,000 cases and Ireland has 212,000. New Zealand, on the other hand, has had 2,357.

The country’s early onset practices ensured these case drops. When the pandemic first spread across the globe, symptom notifications and testing results were acted on more quickly than the rest of the world as tests came back in short periods of time. If any tests came back positive, quarantines would be immediately enforced through contact tracing, quarantining anyone who had been in contact with that person within the past two weeks.

The country also established initiatives that repeatedly tested communities that were at greater risk, such as areas with heavy senior populations. This was done by the government to ensure no unnoticed outbreaks occurred, and more importantly, to prevent any outbreaks in the first place. New Zealand put strict transportation and travel bans into place starting in March of 2020 to prevent spread, as 58 percent of their first infections came from other countries. These actions effectively controlled the pandemic to the point where the low averages had been the norm since May.

Another contributor to New Zealand’s success is Prime Minister Jacinda Ardern. “I am personally very proud of how New Zealanders have taken to the battle with COVID-19,” said Ardern when referring to her country’s response to the pandemic. The measures taken allowed them to host the Australian Open with 30,000 fans attending per day allowed.

Another success story is depicted in Australia, New Zealand’s oceanic neighbor. Once again, the country used strict travel restrictions to combat the virus. Its response to the pandemic was mostly based on the foresight and directions of Australia Health Minister Greg Hunt. The country enacted a strict lockdown for 111 days with strict border closings, precise contact tracing and quick testing. The country even set up systems that allowed Australians to see doctors over the Internet.

“It is quite impressive as to what New Zealand and Australia have been able to do in a period of time where many other countries are still struggling with the pandemic. It seems like they listened to science instead of going by the opinions of a group of people,” sophomore Patrick Keough said.

Americans may look at these examples and ask, “Why not just do that in the United States?” The reality of the matter is it is not as simple as that. The United States is an economic and travel hub, even during the pandemic. These strict measures would be opposed by those who argue that it would infringe on their freedoms, while others will struggle with unemployment. This argument has been made by former New Jersey Governor Chris Christie who stated “We have got to let some of these folks get back to work, because if we do not, we are going to destroy the American way of life in these families.”

Additionally, a lockdown would most likely take longer than just a few weeks like it did in New Zealand, but would be more similar to the several months that Australia quarantined for, due to the sheer size of the United States. When Australia’s lockdown first started, lax security measures carried out by individuals only contributed to the virus’s spread, meaning that if these lockdowns were to work, everyone would have to be on board and vigilant.

“I am not sure how well it would work in the United States. Even in lockdown, there are people that would still disobey or go against that notion,” sophomore Bryan Guillen said.

With that said, these stories show that there is hope for things to return back to normal. There are surely things that the United States and other countries who have been hit hard by the virus can learn from Australia and New Zealand, especially when it comes to effective testing, tracing and isolation. For now, New Zealand and Australia will continue to live in a seemingly parallel universe from the rest of the world, leading many to consider “What if other countries followed this Oceanic example?