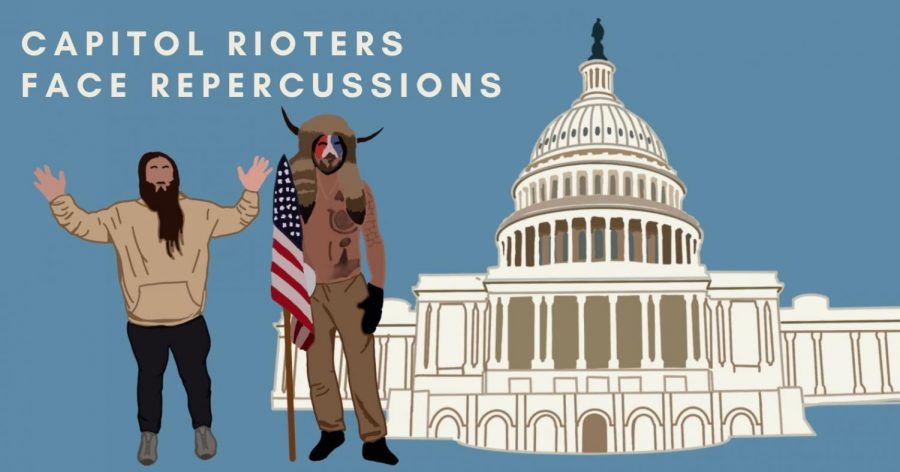 Multiple Capitol rioters have been identified and arrested after the Jan 6 events.

Hundreds of people participated in the Capitol Building riots during which multiple crimes, from gun-related offenses to assault, were committed. So far, 135 offenders have been arrested and 400 suspects have been identified. Some of the more well-known rioters that were apprehended for their participation are Doug Jensen, Josiah Colt, Richard Barnett and Jacob Anthony Chansey. All of these protestors have been arrested and charged with several crimes.

“I believe the capitol rioters should face incredibly strong charges for what they did,” freshman Steffi Sarmiento Mena said.

Doug Jensen was seen in the Capitol confronting police officers and forcing his way through the building, leading other protestors behind him. This was caught on camera and shared on social media, which allowed officials to later find and arrest Jensen. He faced charges of assault, disruption of peace, obstruction of the law and violent entry into the Capitol building. He was released from state custody, but it is unclear whether he was freed or transferred to federal custody.

Another similar case is that of Josiah Colt, who was jailed in Boise, Idaho after turning himself in. In videos taken of the event, he could be seen hanging off a balcony and later sitting in Mike Pence’s chair in the Senate Chamber. Colt also insulted Speaker of the House Nancy Pelosi after coming out of the Capitol where he sat in the Vice President’s chair. This footage of him was spread by various media networks and news sites, therefore he was easily recognized by police once investigations began.

Richard Barnett, another one of the rioters, was seen on footage sitting at Pelosi’s desk in her office. He was taken into custody on Jan. 8, 2021, and faces charges of knowingly entering a restricted building without lawful authority, violent entry, disorderly conduct on the Capitol grounds and theft of public money, property and records. He is currently waiting in jails as his trial remains pending.

Jacob Anthony Chansley became infamous for multiple pictures of him at the capitol that went viral on social media. Wearing a bison headdress, carrying a spear with an American flag on it and sporting the American colors red, white and blue painted on his face, he earned the nickname of “Viking Man.” Chansley is a notorious conspiracy theorist from Arizona who was arrested on Jan. 9, 2021 and charged with knowingly entering a restricted building without lawful authority, violent entry and disorderly conduct on Capitol grounds.

There were also several women on the Capitol grounds during the riots, one of them being Riley June Williams. She was present in Washington and stole one of Pelosi’s laptops. One of her former boyfriends reported her and told the court Williams was planning to sell the laptop to her friends in Russia, who would have then sold it to Russia’s foreign intelligence.

The sale failed and Williams later turned herself in to the police on Jan. 18. She was charged with theft, obstruction, trespassing, violent entry and disorderly conduct on Capitol grounds. She was later released into the custody of her mother with travel restrictions and instructions to stay off the internet. Williams was asked to delete all her social media accounts and is limited to a flip-phone for now.

In the end, there were dozens of Capitol protestors arrested and charged with obstruction of justice and disorderly conduct on Capitol grounds. Many are in jail and investigations on different suspects are still running today. This was an event never seen before in America with severe consequences, resulting in five deaths – including that of a police officer – heightened security, legal repercussions and ultimately a second impeachment for former president Donald Trump.

“If they wanted to make a statement, they should have just manifested outside the capitol. No one should have broken into it or shot anyone. The worst part is no one told them to stop,” freshman Prune Mathiot said.