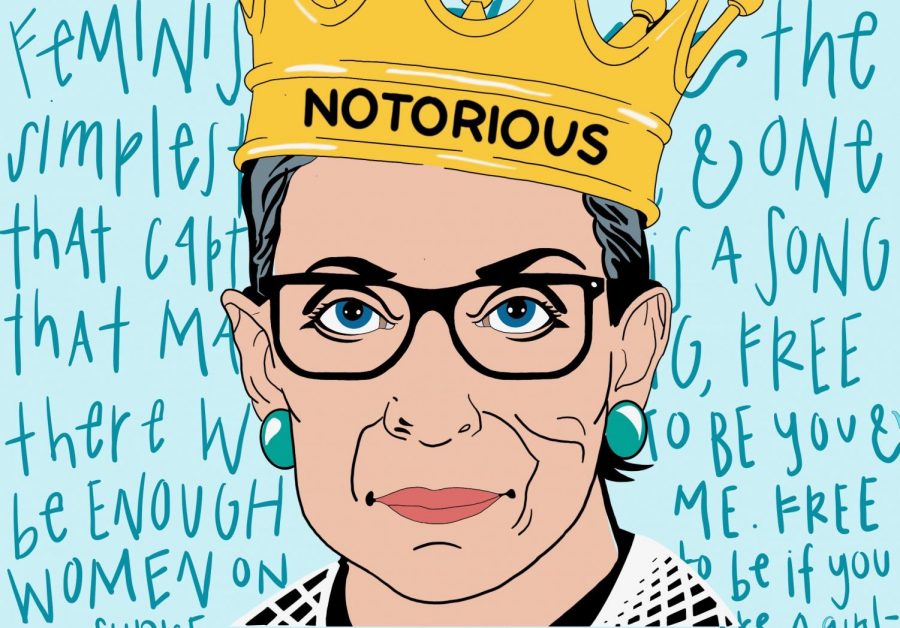 After decades on the bench, the justice known as RBG has passed away with only a few months left in the Trump presidency.

The term “Notorious RBG” has become an affectionate national eponym for Supreme Court Justice Ruth Bader Ginsburg. On Friday, Sept. 18, the Supreme Court announced the death of the beloved 87-year-old judge who served over 27 years on the bench. Her tragic passing was due to complications surrounding her longtime battle with metastatic pancreatic cancer. Being the second woman and the first Jewish woman to serve on the Supreme Court, she left a long-lasting impact on all Americans.

Ginsburg’s law career started at Cornell where she graduated in 1954 with a Bachelor’s degree. She soon started at Harvard Law School and was one of only nine women in a large class of five hundred students. She ended her studies at Columbia University, finishing her last year in 1958. Her studies at these three schools helped her make her way to the top of her class, and she was recognized at all three colleges for her outstanding achievements. Along this prestigious academic path, she faced various forms of discrimination, mainly due to the fact that she was a woman with children and was Jewish. Ginsburg struggled to find a place for herself in the civic world and was often put down by multiple practices because of existing laws during the time that discriminated against women in the workplace and society. The harsh obstacles she faced led her to become an enormous advocate for women’s rights and equality. Her determination quickly led to her career advancement, and she soon was appointed to the United States Courts of Appeals for the District of Columbia Circuit in 1980 by president Jimmy Carter.

“Ruth Bader Ginsburg was a remarkable justice and will be remembered as a champion of women’s rights. Ginsburg helped extend the 14th amendment, making sure it covered sex-based discrimination, and she advocated for the equal pay law,” sophomore Diego Gomez sad.

Before Ginsburg became a judge for the Supreme Court, she battled six cases against the judges in power throughout the 1970s. Out of these six, she won five and paved the way for change in laws that oppressed women. She fiercely combated sexism and one of her main accomplishments was convincing the court to let women attend the Virginia Military Institute, a highly esteemed all-boys military school that received large amounts of state funding. “People ask me sometimes ‘when will there be enough women on the court?’ And my answer is ‘when there are nine,”’ she once said. This clever response to the public’s questions is what set Ginsburg aside from her fellow judges and what has made her so inspirational.

In another court case, “Reed versus Reed”, Ginsburg applied the 14th amendment to her argument. This court battle was actually the first time that the Supreme Court had ever applied the Equal Protection Clause to a law that discriminated against women and dealt on the basis of sex. Ginsburg also argued cases that involved situations where men were oppressed due as well, such as in “Frontiero versus Richardson.” In this case, Ginsburg argued for a man who had to prove that he was dependent on his wife’s income while women at the time did not have to prove the same. Her constant determination to create a nation where both men and women were equal has inspired not only girls of today’s age, but all minority groups and those who have faced discrimination in the past. Ginsburg’s notability for dissenting in court decisions also gave her an energetic and tenacious quality that people all across America admired.

While her life is being honored across the country, there is still a question about if President Trump will fill her spot or if Congress will stall due to upcoming elections. People of all parties are anxiously awaiting the government’s decision. In the meantime, Ginsburg will forever be remembered in this nation for her work towards women’s equality and her respected qualities. Even those who did may have disagreed with her opinions, such as her notable friend Antony Scalia, a republican whose civic ideologies were the exact opposite of hers, could agree that her work and dedication were extremely valuable.

Notorious RBG will be forever treasured in the hearts of Americans and as she once explained, people “will only have true equality when men share with them the responsibility of bringing up the next generation.”