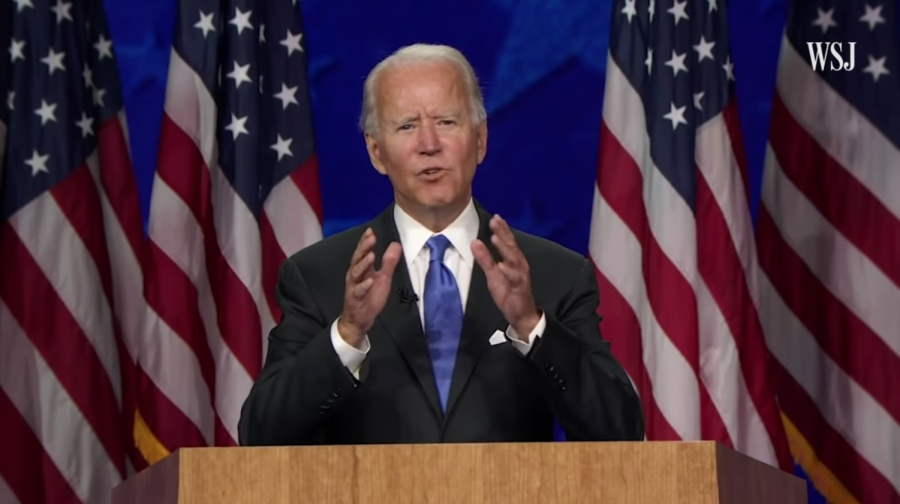 Joe Biden delivering his acceptance speech on day 4 of the 2020 Democratic National Convention.

For the first time ever the 2020 Democratic National Convention was held virtually. Over the course of  four days, it gave the audience a clear understanding of the Democratic Party’s objectives. The delegates casted their vote in a live roll call and its is now confirmed which Democrats will be running this year: Joe Biden as presidential nominee and Kamala Harris as vice presidential nominee. This event happens every 4 years with the intent of choosing one final nominee from the party to run for president as well as who will be running by their side. The convention was initially planned to be hosted at the Fiserv Forum, Milwaukee from July 13 – 16, 2020 but got postponed and ended up being held at the Wisconsin Center from Aug. 17 – 20, 2020, with some speakers live streaming from their home states.

As often occurred in past conventions, many important political figures spoke out during the convention. People from all states broadcasted it from their home or a monument in their home state. Some of the speakers included Former President Barack Obama, Former First Lady Michelle Obama and Former Secretary of State Hillary Clinton who each talked about their personal experiences with Biden. This year was monumental in the DNC’s history for another reason: there was not one keynote speaker, but 17, eleven of them being people of color. They shared their ideals, ethnicities and showed their unity. Some focused on speaking about the pandemic, while others discussed racial injustices across the nation and potential solutions to unify the country.  Every speech involved unity and the importance of voting and civic engagement, each in their own way. In her speech, Jill Biden, Joe Biden’s wife, opened up about his troubles in the past including the passing of  both his first wife Neila and daughter Naomi in a car accident, along with his son Beau Biden who died of brain cancer in 2015.

“I think one of the most brilliant key notes was Joe Biden’s speech, and obviously Jill Biden’s too. I really like how she tied in family because Joe had gone through so many tragic events throughout his life and Jill really tied it in together by saying ‘he made it whole again and he can do it to this country because we’re so divided.’… I think overall people watched it because they want to know what Joe Biden is going to stand for, why people are choosing to vote for him.” junior Jasming Senel said.

On day one, Michelle Obama deliverered her powerful speech saying ‘to vote for Joe Biden like our lives depend on it’ and Bernie Sanders urged his supporters to vote for Biden to bring together the democratic party. A moment of silence was also held for George Floyd and Governor Cuomo denounced Trump’s response to the Coronavirus pandemic. On day 2, Joe Biden was nominated to be the Democratic presidential candidate after a virtual roll call, including every state in the US, is held. That day, 17 keynote speakers delivered a joint speech and Jill Biden delivered her speech as a potential first lady. On day 3, Kamala Harris made her official speech accepting the vice presidential nomination, which portrayed the future she hoped for if Biden was elected. On the last day, Joe Biden accepted the Democratic Party’s presidential nomination from their home in Willigton, Delaware.

“The virtual format definitely subtracts from the Convention’s gravitas, but it was clearly organised with conciseness and intention. Although we can’t expect viewership to be the same as for an in-person event, this election cycle’s DNC has still made rounds in the media given the importance of the 2020 presidential election” senior Aya Hamza said.