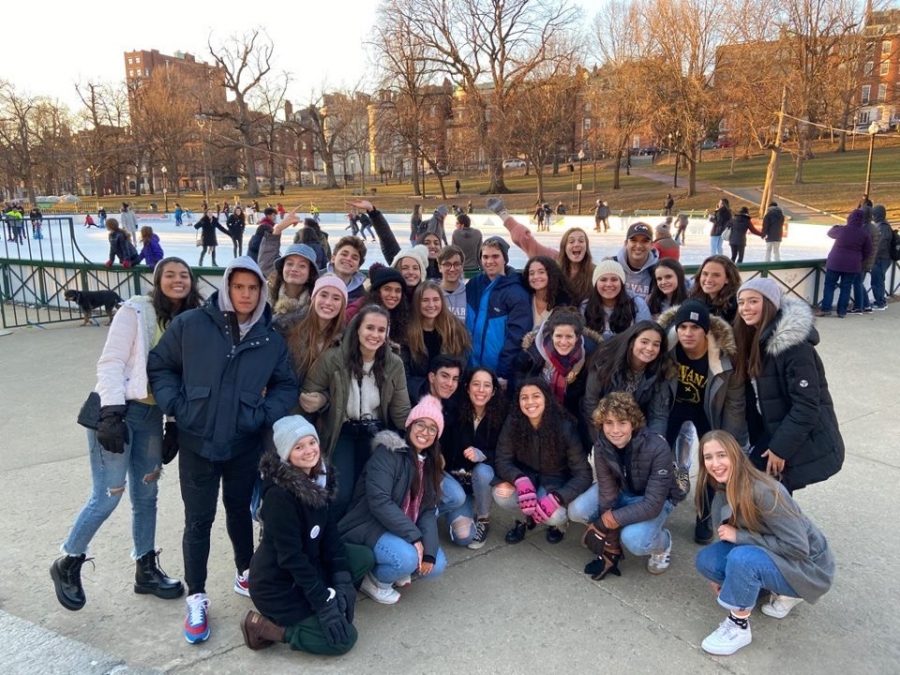 The students participating in the Harvard Model Congress Trip pose fro a group photo in front of the Frog Pond.

A group of Gables students participated in one of the school’s most beloved out-of-state field trips from Feb. 19-23: Harvard Model Congress. During the five-day trip, Cavaliers explored Boston, attended classes at Harvard University and participated in a simulation of Congress that allowed them to work with students from around the nation to solve some of the nation’s most pressing policy issues.

At the Harvard Model Congress awards assembly at the end of the weekend, several cavaliers won “Best Delegate” or “Honorable Mention” titles in their committees, and all of them had gained a better understanding of the inner workings of the American government. Junior Aya Hamza also represented Gables on stage during the ceremony to give a Delegate Speech where she shared how her Iraqi-American nationality has influenced her identity and relationship with politics since childhood.

The first day of the trip began with an early-morning flight and a ride on Boston’s extensive “T” subway system that brought students to the centrally-located Prudential Center where the conference was held. The Cavaliers kicked off their stay with sightseeing around Boston Commons and ice skating at the Frog Pond in the area.

Dinner that night offered students a glimpse into the multicultural nature of the historic city; Faneuil hall is a centuries-old market and food court that incorporates cuisines from Indian to Greek to traditional Boston Clam Chowder. Afterward, the group walked to the famous Mike’s Pastries in the Italian district of the city to sample some traditional cannolis and other desserts.

The following morning kicked off what is referred to as “Harvard Day,” where students participating in the Model Congress are able to sit in on classes at the prestigious Harvard University. Although some participants were only 15 years old, the experience allowed students to immerse themselves not only in college life, but in academics at one of the top colleges in the nation.

“I had an amazing experience because being a part of Model United Nations gave me a look into what the conference experience would be and the flow of HMC exceeded my expectations. I met a lot of people with the same interests of me and that are on similar wavelengths, while gaining insight on opposing views,” sophomore Lauren Gregorio said.

Harvard University, in conjunction with the conference, offered students a list of classes they could attend, including Economics and Morality, Feminist Political Philosophy, Environmental Science and Engineering, Foundations of Comparative Politics and several others.

After absorbing the morning lecture, the Cavaliers returned to the hotel to prepare for the opening ceremony, including a speech from a former congressperson and the student organizers of the conference, followed by the first official committee session of the year.

This first session consisted mainly of icebreakers, the introduction of ground rules, and a brief explanation of Parliamentary Procedure – a set of rules and formalities for conducting business in a legislative body such as the senate.

“My committee at HMC was foreign relations [and] what I took away from it was to not let yourself feel overwhelmed by public speaking because everyone’s eyes are on you because it’s more of a mental block that is keeping you from being respected by the ‘big guys’ in the room,” junior Sophia Weigel said.

Just as in real Congress, each participant had already been separated into a committee and given pre-conference assignments to familiarize themselves with the material that would be discussed. When the first committee session began, each student was armed with two pre-written speeches and extensive knowledge of the representative they would be impersonating, which helped to quickly kick off debates and bill-writing.

Following a productive first session, the next morning began with a “Full House” and “Full Senate” session, in which delegates from all House members and all Senators convene in their respective groups and hear bills that were passed in the committees of their congressional chamber.

The legislation proposed in these Full House or Senate sessions addressed a wider range of topics, from attempting to fix the school-to-prison pipeline to stabilizing the United States’ relationship with North Korea to limiting the power of large pharmaceutical companies in America. Bills that successfully passed in full House would be presented to Full Senate, and vice versa. If the bill passed both the House and the Senate, they were presented to the Presidential Cabinet.

The day continued with more committee sessions, in which most committees moved on to discussing their second briefing and drawing bills to resolve their issues of focus. At the beginning of each briefing, students would begin a general speakers list. This gave them the opportunity to channel their role and practice their public speaking skills into a 1 minute speech about the policy of their choice regarding that briefing. This would help the committee come up with bipartisan solutions to the briefing at hand.

After several hours of committee, the committee chairs adjourned to allow the representatives to eat dinner. Because the conference was held in the Sheraton Hotel, which is connected to the Prudential Center Mall, students had a variety of dining options while staying indoors. Once dinner ended, committee sessions continued so that the delegates could finish passing and amending bills.

The following day, Harvard organized several seminars before committee reconvened. These seminars, with topics ranging from women in politics to the economics of healthcare, were lead by Harvard students and gave delegates the opportunity to have real conversations with these role models. After a concluding day of conference, students had free time for dinner and reconvened at a delegate social. The social allowed the delegates to mingle among themselves with dancing, food and music provided.

At the closing ceremony, former senator Elizabeth Esty gave the keynote address, inspiring students to pursue their goals for later life. Additionally, two students who submitted an application were selected to address the 1,500 attendees of the conference. Gables’ very own Aya Hamza spoke to the students about her pursuit of activism throughout her life and the importance of civic engagement, not only to her but the world as a whole. The presidents of the conference spoke, and gave out each committee’s “Best Delegate” and “Honorable Mention” awards. In total, six Gables students won an award out of the 30 delegates from Gables attending the conference, a nice send-off to another successful year at the conference.