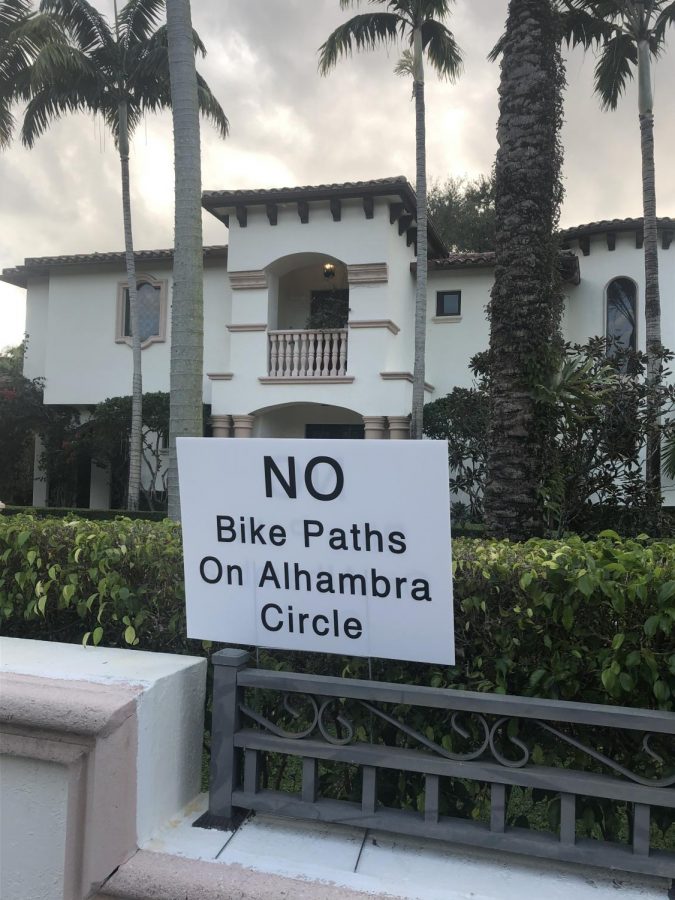 The proposals of having bike paths in Coral Gables has stirred controversy within the local community, upsetting several Coral Gables residents.

Coral Gables is known as one of the greenest and most environmentally friendly cities in South Florida, and the latest proposal to the Alhambra Street project could help cut down on emissions from cars by encouraging residents to ride bicycles instead. In 2004, city officials first proposed a bike path plan that got shot down by residents. But then, in 2014, the commissioners passed the bike and pedestrian plan after four public meetings and a vote. The latest proposal includes adding bike lanes and extending sidewalks along a 2.3-mile stretch of Alhambra Circle from Coral Way to the University of Miami. Many residents were very upset when they heard the proposal because they fear that the construction of these lanes will result in knocking down trees and disrupting the greenery Coral Gables is known for.

Bike Walk Coral Gables, a non-profit group that promotes a safe environment for bikers and pedestrians, was a proponent of this new path. This proposal would lead to safer conditions for cyclists in the Gables and lead to less injuries and accidents. However, many are concerned that it will include the removal of trees and turn the area into “a concrete jungle with no shade or greenery,” angry resident Silvia Pinera-Vazquez wrote in a letter to city officials. The assistant city manager said the city has five arborists on staff whose goal is to preserve all of the trees on Alhambra Circle during the construction of these bike lanes. According to the city, they are designing the project around existing trees,with the goal of only dying trees being removed. The project would also be built within the public right-of-way and no private property would be used for the project.

Both sides were very vocal on their positions leading up to a city vote.  On Jan. 28, the Coral Gables commission unanimously voted to remove the bike path component of the Alhambra Street project.  This pulls the plug on the entire path and the City of Coral Gables will forfeit the $600,000 grant they applied for in 2015.  The commissioners believed that, since all the questions could not be answered about the number of trees that would actually be affected, they could not agree to the project.

This issue continues to divide the City of Coral Gables as many residents want to see a safer and healthier way to get around the city. Although this proposal has been voted down, one city commissioner already called for a special sunshine meeting to discuss the future of a bicycle and pedestrian walkway and a city-wide referendum.  Until an adequate resolution is agreed upon, the City Beautiful will have to wait for more bike paths.