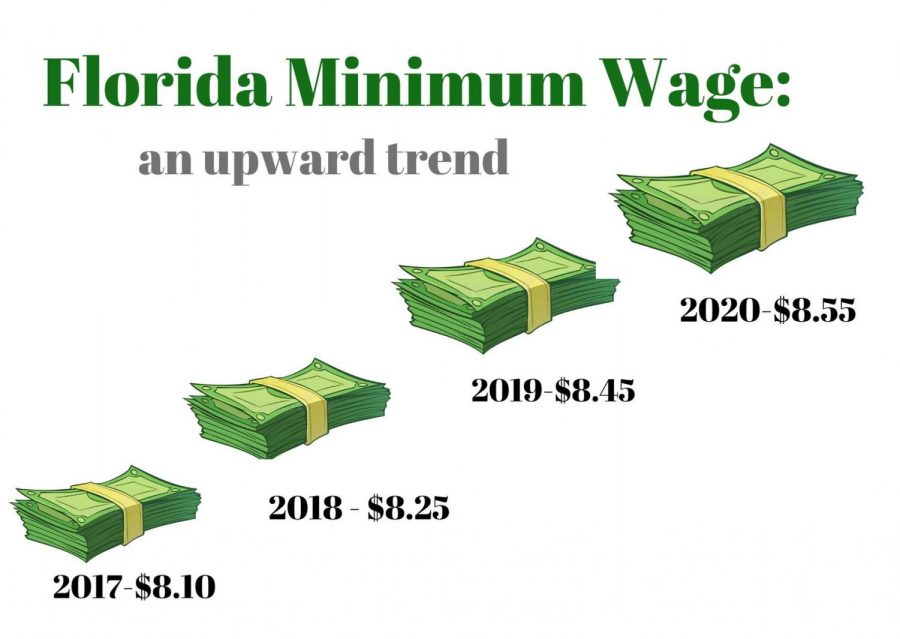 The increase in minimum wage will affect high schoolers who work to help their families afford the high cost of living in Miami.

An increase in wages is often a heavily debated topic, and this proposal was no exception. There has been an upward trend visible in most states, one of increasing wages. This means that the amount of money in people’s pockets is increasing, but prices may also increase.

The minimum wage will only increase by ten cents in January 2020, which is quite significant compared to other years that had experienced little to no growth, but pales in comparison to the proposed increases to be experienced over the next seven years. The fact that people debate even increasing the minimum wage, due to the downsides like inflation, shows how impactful the increases will be.

“The proposal seems out of reach if this year’s increase is anything to go by,” freshman Patrick Heydasch said.

The proposal to increase the minimum wage in Florida to fifteen dollars by 2026 is one that has been heavily scrutinized. To increase wage by a few dollars a year is enormous in comparison to the amount of growth experienced over the past few years.

An increase in wages adds to the number of bills in somebody’s pocket, but it often makes each bill worth less. This phenomenon, inflation, is the reason why a candy bar used to be twenty-five cents in the 1950s, yet it is now a few dollars. Back then, the minimum wage was around seventy-five cents, the equivalent of eight dollars in today’s economy.

Many people have been calling for wage increases, as the United States has a lower wage when compared to the likes of England, Australia and Canada. Increased wages have not negatively impacted the previous countries.

In California, the minimum wage is currently twelve dollars. This wage is set to increase until it hits fifteen dollars in 2023, which is much like the proposed plan in Florida. The California plan was made to reduce the price of living, which is very high in California. It has, however, only increased the price of living, and had the side effect of increasing the cost of all other items. This inflation has almost completely canceled out the increase in wages.

“California’s wages have not really helped any of the problems in California, so I doubt it will work in Florida. Inflation is just too hard to reduce,” freshman Brian Matute said.

Florida will vote on increasing minimum wage to fifteen dollars by 2026, which could either benefit in giving common people more money, like in California or lead to an increase of inflation, causing the dollar to be valued less than before.