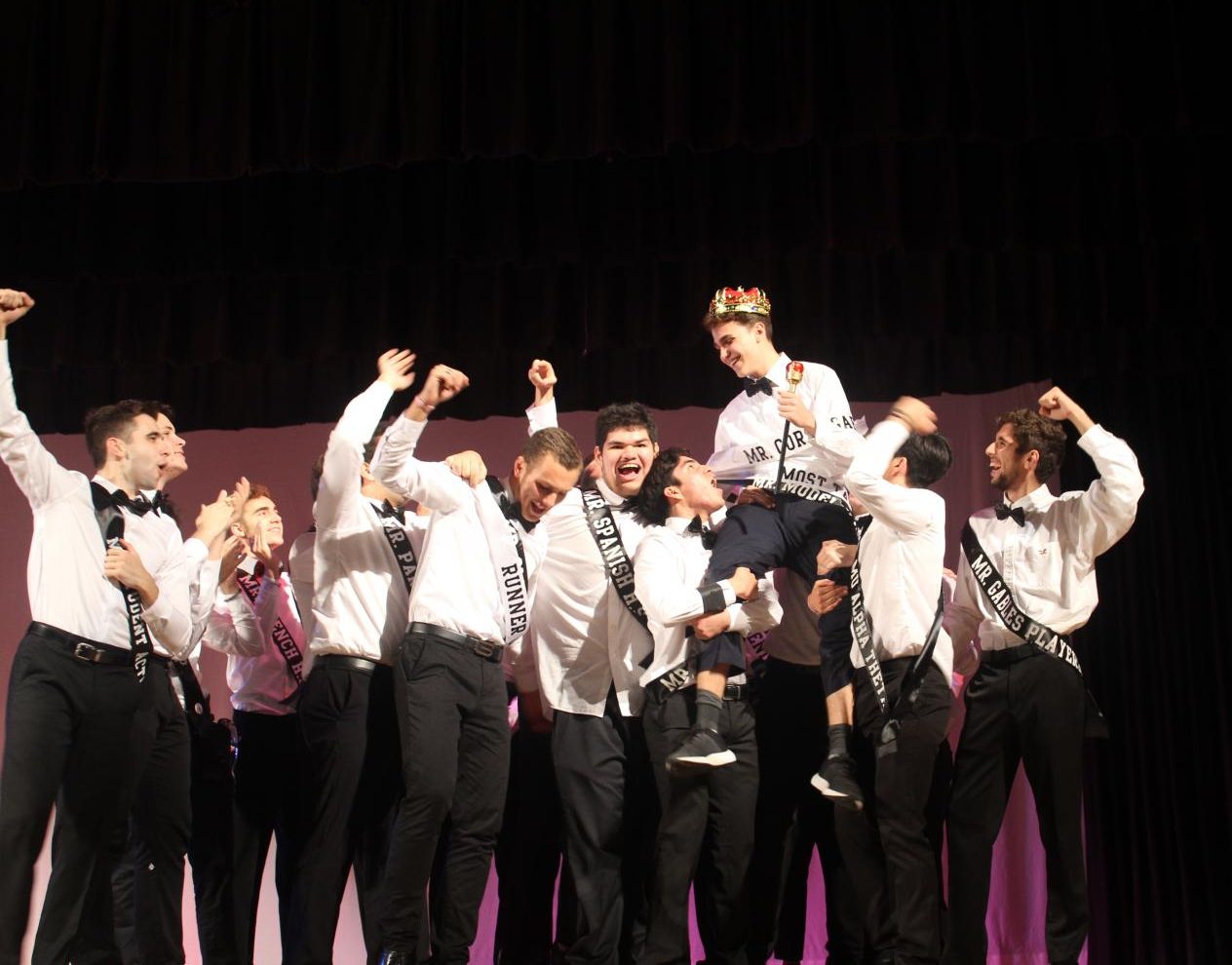 After the winners for "Mr. Congeniality," "Fan Favorite" and "Most Talented" were announced, Alexander Sutton - Mr. Model United Nations - was awarded with the title of "Mr. Coral Gables". (Kluivert Suquino)

After the winners for "Mr. Congeniality," "Fan Favorite" and "Most Talented" were announced, Alexander Sutton - Mr. Model United Nations - was awarded with the title of "Mr. Coral Gables".

The MUN, the Myth and the Legend

On Dec. 19, Coral Gables Senior High School held the annual “Mr. Coral Gables” pageant in the auditorium. Themed “A Night at the Movies”, the latest rendition of this Cavalier classic brought excitement, tears, and laughter to all of those in attendance, and all of which were followed with thunderous applause as Alexander Sutton, representing Model United Nations, was crowned the victor. Below is a full recap of the event in its entirety, covering all of the award winners and the most memorable moments from the show. 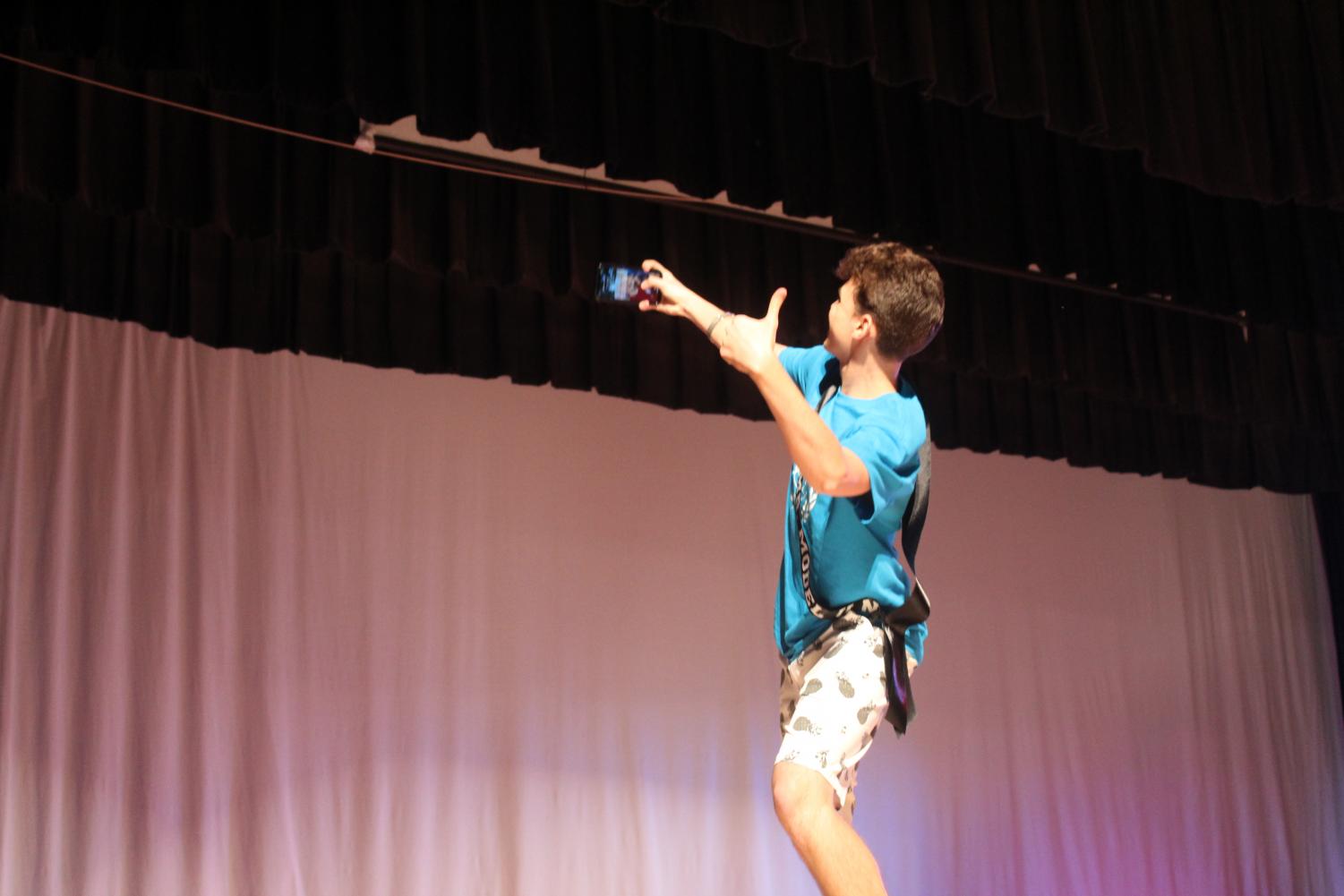 Mr. MUN takes a selfie with the cheering crowd behind him.

After a long night of deliberation from the judge panel attending Mr. Coral Gables, Alexander Sutton – Mr. Model United Nations – was awarded both the “Most Talented” award for his humorous political impersonations and the highly coveted “Mr. Coral Gables” title among the 25 participants competing in the event.

Other winners of the pageant include Mr. Volleyball, Marlon Frederique, who was voted Mr. Congeniality by his fellow contestants, and Mr. Junior Reserve Officers’ Training Corps (JROTC), Gabriel Armendariz, who was dubbed “Fan Favorite” for receiving the most digital audience votes.

The show was organized by Ms. Diaz, the Gablette coach, along with Janelle Lora and Chris Caceres, both of whom are seniors under the Gablettes and Co. dance team. Practices in preparation for the event started several weeks prior to the show date and lasted hours after school to create a clean and organized dance performance.

The show opened with a dance by all of the Mr. Coral Gables Contestants. Choreographed and taught by the Gablette organizers, the song was a mash-up of 20th and 21st-century cinematic hits that set the energetic tone of the night.

This opening dance was immediately followed by a fan favorite: the beachwear segment. Each contestant walked down the stage in their own unique beachwear costumes, including some who carried floaties, surfboards and other props. While they posed for the crowd, announcer Ketty Dones read a description of each candidate’s own description of themselves, including commentary of their habits, personalities, and activities.

On the day of the Mr. Coral Gables show, each contestant had already received a score for their talent and performance from a panel of student and teacher judges. After the beachwear portion of the show, the ten top-scoring contestants were announced in alphabetical order. Out of the 25 original contestants, only these ten moved on to the second portion of the show, which began with the “Top Ten Dance.”

The contestants, each paired with a Gablette, spun around the stage to a second mixture of songs which included hits from movies like “Grease”, “Dirty Dancing” and “My Girl”.

These competitors were then allowed to show their personality through a “talent,” an act that they presented to the judges to show off their strengths. The range of talents was varied; Mr. Student Activities (Daniel Toll) stunned the crowd with a self-choreographed dance mash-up, Mr. Highlights (Ruben Escobar) kept them on their toes with a compilation of TikTok Dances, Mr. Swimming, (Jonnathan Gonzalez) played Mozart’s “Rondo alla Turka” on the piano, and Mr. Yearbook (Christopher Brazda) brought his dog on stage to show off some tricks.

“Choreographing my talent and adding Ketty to it was one of my favorite parts of the Mr. Coral Gables show,” senior Rodney Michel said.

The talent portion of the show was also where the victor, Mr. Model United Nations, excelled. His talent included a unique impersonation of four different politicians, acting as if they were running for Student President of Coral Gables Senior High. As Donald Trump, his references to making a rival school pay for the “wall” in reference to ongoing construction on campus won cheers from the audience and smiles from the judges. Sutton’s lines as Bernie Sanders in which he criticized the rising price of bagels at Gables and calling for an “equal distribution of Advanced Placement (AP) scores” among students also brought cheers.

Only these five contestants proceeded to the final portion of the competition, an on-stage interview with the panel of judges. Each person got a turn on stage to answer the same three questions while the other contestants waited outside, a precaution taken to ensure that no one candidate heard the questions before their interview was underway.

The judges, all gables alumni, asked contestants about their role models, favorite movie, and what sets them apart from their peers. After hearing the responses, the judges deliberated the strengths and weaknesses of each candidate closely and declared the runner-up to be Mr. Swimming, and the winner to be Mr. Model United Nations.

As confetti shot up in front of the stage, the competitors excitedly congratulated Sutton and the other victors. Win or lose, there was nothing but smiles by the end of the show.

“My favorite part was getting to know and interact with the other guys. It was so much fun putting together a show alongside the Gablettes and spending those small moments with them,” senior Ruben Escobar said.

Until next year’s show, Alexander Sutton, Mr. Model United Nations himself, reigns supreme as Mr. Coral Gables and will hold the throne until his eventual successor claims it next winter. 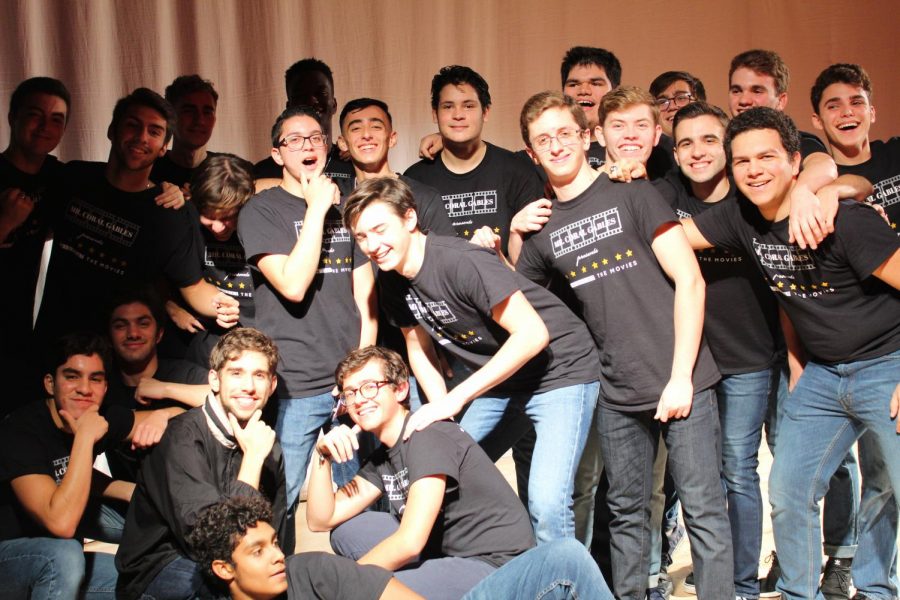 Gallery|10 Photos
Kluivert Suquino
Backstage before the show, the Mr. Coral Gables contestants pose for a picture in their customized t-shirts.
About the Contributors

Daniel "Danny" Toll, is a senior in the International Baccalaureate (IB) program at Coral Gables Senior High. In what will unfortunately be his last year... 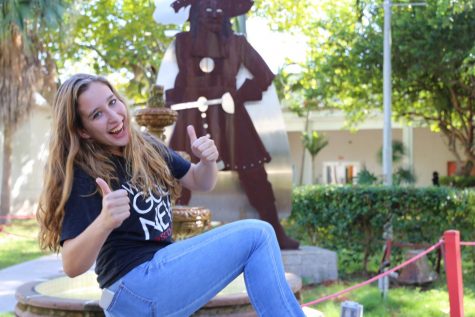 Chase Bagnall-Koger is a Junior in the International Baccalaureate (IB) program who is excited to be returning to CavsConnect for her second year as as... 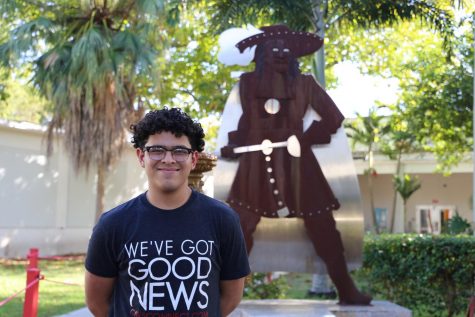