Cavaliers in the Capital: NSPA 2019 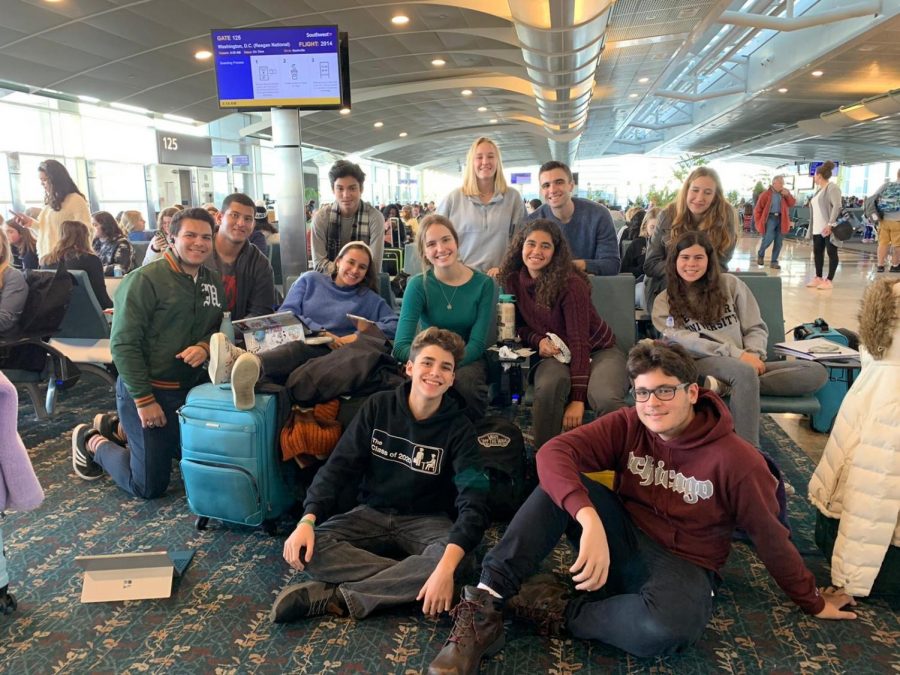 The Cavaliers attending NSPA 2019 smile at the Orlando airport on their way to the National Scholastic Press Association (NSPA) convention on Nov. 21.

From Nov.21 through Nov. 24, staff members of Gables’ Catharsis, Cavaleon, CavsConnect, and highlights  CAF&DM publications flew to the nation’s capital to participate in the National Scholastic Press Association’s (NSPA) annual convention for high school journalists. At the trip, the Cavaliers attended seminars coordinated by experts in the field of communications and advisors of successful high school publications, and explored the sights of Washington, D.C. in their free time.

After an early flight from the Fort Lauderdale – Hollywood International Airport, the trip began with a far-too-cold sightseeing adventure in the outskirts of the heart of D.C. After a few underground metro stops, the students made their way to the “Newseum,” a series of exhibits documenting the development of journalism and photojournalism over time.

As the day came to a close, the students returned to the Marriott hotel where the convention was being held to attend the keynote session featuring speaker Chuck Todd. Todd, the current host of “Meet the Press” and well-known political commentator, was asked questions by a moderator about the importance of journalism in this political climate. He also went on to give advice about the difficulties of being a journalist and discuss his own hardships in the field.

“NSPA was really an eye-opening experience. I’ve been watching Meet the Press with Chuck Todd every sunday for as long as I can remember and seeing him in person was surreal. Apart from all the amazing opportunities NSPA offered, I was able to reunite with friends from all over the country and grew closer to the other Gables students. D.C .is one of my favorite cities and, as the center of journalism in the US, I think it was the perfect place for NSPA this year,” junior Alexandra Torres said.

The next morning marked the beginning of official NSPA sessions, which took place from 9:00 a.m. to 2:00 p.m. Each hour-long session was hosted by a journalism expert, including college professors from prestigious educational institutions, like Northwestern University and Elon University, professionals in print or broadcast, and free-speech advocates such as Mary-Beth Tinker of the famous Supreme Court case Tinker vs. Des Moines.

The sessions catered to different publications – yearbook, broadcast, news magazine, and web – and the various goals encompassing each type of publication; where some sessions were geared towards increasing readership, others were how-to’s on staff bonding and communication.

After the final session of the day, the Cavaliers visited old town Alexandria in Virginia before returning to the National Mall to view some of the presidential and war monuments in the area, such as the Lincoln Memorial, the Washington Monument, and the Korean War Memorials.

The following day, our Cavaliers and students from around the nation gathered for another jam-packed day of sessions, which lasted from 8:00 a.m. to 4:00 p.m. Here, students continued to gain insight on their designated topics, from opinion editorials to class management and organization. Similar to the previous day, the Cavaliers headed for lunch after their sessions and went back to their rooms for some much-needed rest.

The day ended with a nighttime tour of the city on a bus traversing some of Washington, D.C.’s most impressive sights, including the White House, the Capitol Building, the various Smithsonian Museums, and the National Mall, all of which stood out from the night sky with their marble exteriors and golden lighting. With every passing historic landmark, the guide provided a brief history on it, sharing his knowledge of Washington, D.C. trivia with the passengers throughout the night.

On the final day of the trip, the Cavaliers spent their last hours in the nation’s capital touring two of the D.C’s signature museum: the United States Holocaust Memorial Museum and the National Museum of American History. The former, while emotionally striking, provided exceptional insight into the horrors and tragedies that occurred during the Holocaust and World War II and was incredibly informative, whereas the latter was more upbeat, with a broad spectrum of interesting and interactive exhibits covering the history of United States transportation, politics, food and pop culture.

Upon completing their final two tours, the Cavaliers made their way back to the Reagan National Airport, where they would catch their flight home.

“I had so much fun at NSPA, not only because it was in D.C. – the coolest city in the world as far as I am concerned – but also because, on top of all the great meals, all the learning we did in the sessions, and all the exploring we did every night, the best part by far was spending time with some of the coolest people in the world. Friends made NSPA what it was and I am so grateful I got to spend all that time with them,” senior Alexander Sutton said.

The 2019 NSPA conference in Washington, D.C. marks the second consecutive year that Coral Gables Senior High has attended the conference, with its predecessor being held in Chicago, Illinois during the autumn of 2018. This year’s edition proved to be just as informative, and the conference’s host city was equally beautiful in its tourist attractions and architecture. Without a doubt, each and every single one of Gables’s CAF&DM publications benefited greatly from their experience at NSPA.