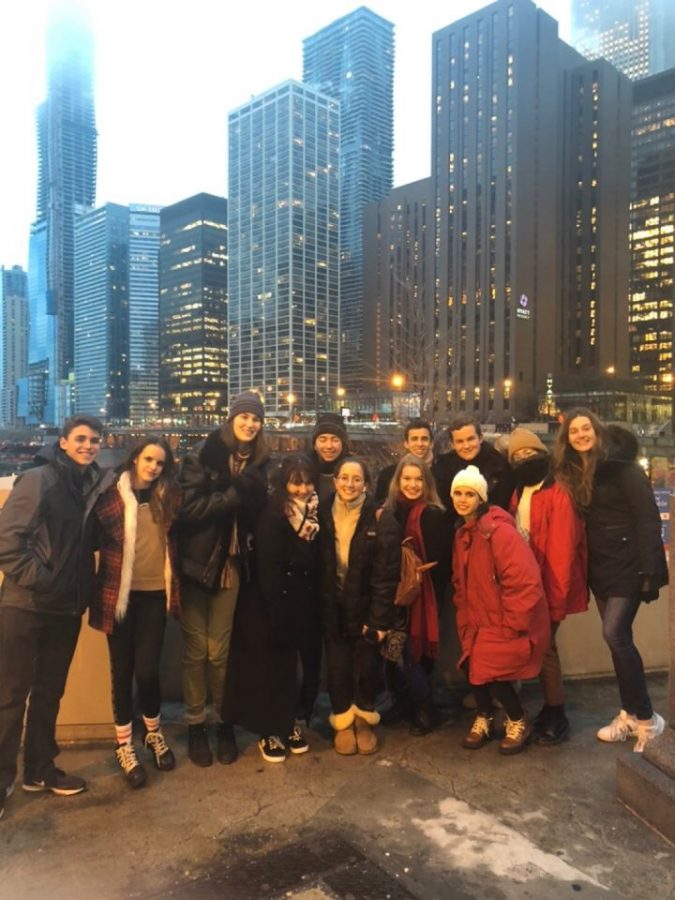 On Tuesday, Feb. 6, the Gables Model United Nations (MUN) left bright and early to Chicago, IL to compete in the 31st Annual Model United Nations of University of Chicago (MUNUC) conference. As one of the larger conferences in North America, the conference was open to over 2,800 high schoolers who were offered the opportunity to be in one of 31 committees.

Although the conference started on Thursday, February 7th, the 12 students left on Wednesday, so they could get used to the city and have a day for sightseeing and group activities. As a fun midday activity, students went ice skating on the McCormick Tribune Plaza, which was conveniently located right next to one of Chicago’s most iconic landmarks, the Bean.

The rest of the day was spent wandering the chilly streets, which was quite foreign to the Miami students. To wrap up the first day, Gables students enjoyed some fresh donuts from Stan’s Donuts before heading to dinner. This concluded the only relaxing day as the high-caliber conference began the next day.

“As one of my first Model UN conferences, it was quite overwhelming. Seeing so many talented students was certainly intimidating. However, the chairs and our club sponsors instilled a sense of confidence in me that carried me through it,” sophomore Sophia Weigel said.

On Thursday, the students attended training sessions that focused on specific types of committees such as Crisis or General Assembly before officially kicking off the first day. Later on, the team was able to hear from two keynote speakers, both of which discussed the importance of diplomacy on the global stage. The educational speeches captured the attention of those in the room, but a sense of nervousness was felt throughout the room as the 2,800+ delegates mentally prepared to begin.

The first committee naturally had our Cavalier delegates filled with jitters especially coming off the back of such an impressive opening ceremony. Apart from the usual round of introductions and housekeeping procedures, the first committee session was primarily focused on determining which of the two pre-assigned topics would be discussed. For the International Agency on Atomic Energy (IAEA), the topic selected was the environmental impact of nuclear energy.

The second day was arguably the real start of the conference. After topics were selected, lively debates regarding everything from the future of Salvador Allende’s new government to the threat of cybersecurity ensued. Given the complexity and length of the conference, our Cavalier delegates undoubtedly had plenty to discuss and debate on. One of the more curious things at the conference was the abundance of merchandise. Sweatshirts, shorts and t-shirts were sold bearing the insignia of the MUNUC conference, giving delegates the chance to leave Chicago with their experience.

To wrap up the intense yet fun conference, students were able to watch Hamilton at the CIBC Theatre. The show was a perfect end to the weekend as the team was able to enjoy the clever musical enjoyed by theatre fans and novices alike.

“I have been doing Model UN for some time now. Seeing the team come together in such a beautiful city was something I will never forget” senior Audrey Weigel said.

Despite this being the first MUNUC conference for our Model UN team, it will certainly not be the last. Over the course of the week, the Gables delegates were able to participate in high-quality debate while meeting students from all around the world; making this conference truly global.