A Blue and Red Congress 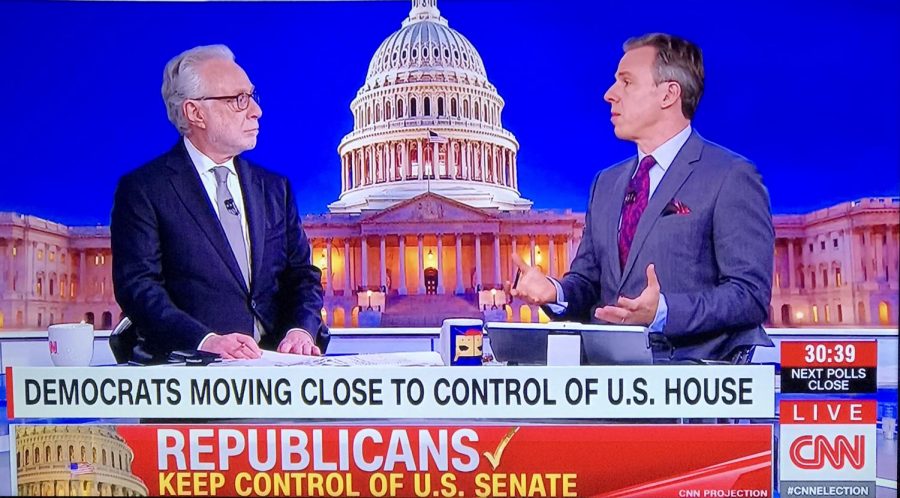 Americans watched from their homes as the polls closed to see who would represent them in government for at least the next two years.

The 2018 midterm elections have reflected the importance of voting more than ever before. Rick Scott won Florida’s Senate seat by only 0.4% of the vote, and it was not the only close call this cycle. Democrats took back the majority in the House of Representatives, but the Republicans gained at least three seats in the Senate. Midterm elections saw 47% of the eligible voting population participating, which is the highest margin since 1966. This election has made history in other ways as well, with over 100 women elected to the House of Representatives, as well as more members from minority groups serving in Congress.

“I have mixed feelings about the results of the midterms. Democrats winning the majority of the House of Representatives is a huge step forward for our country. This win is going to keep our country together in terms of actually enforcing the beliefs that our Founding Fathers held,” sophomore Samantha Gazda said.

In our very own state of Florida, Andrew Gillum and Ron DeSantis faced off for Rick Scott’s position as governor. Gillum was a Democratic candidate who, if elected, would have been the first African-American Governor of Florida. He was on the Tallahassee City Commission for 11 years before becoming Mayor of Tallahassee in 2014. Ron DeSantis, who won the election and is now the Governor-elect of Florida, served on the U.S. House of Representatives from 2012 to 2018.

“I think these midterms are some of the most important elections in our nation’s history. Republicans have a strong group of representatives and it is only ideal for the power to be split among Democrats and Republicans so our country can have views from both sides.,” freshman Joaquin Breslin said.

Though there was only one Senate seat up for re-election in Florida. Rick Scott, who served as governor from 2010 to 2018 ran for the seat and beat incumbent Bill Nelson by 0.4%. The recount for this vote is still pending as of Nov. 8, but generally, a win by a margin less than 0.5% is subject to a recount. Whether or not Rick Scott is going to be a Florida senator is still in question, but this seat does affect the Democrat-Republican ratio in the Senate and will impact the important decisions made over the next six years.

On a more local level, Miami-Dade County, which mainly consists of Districts 26 and 27 in the House of Representatives, elected Debbie Mucarsel-Powell and Donna Shalala to be U.S. Representatives for the next two years. Debbie Mucarsel-Powell, a Latina woman that took the place of her opponent Carlos Curbelo, is serving her first term as a Representative after being involved in nonprofit programs and running for State Senate in 2016. Donna Shalala was the Secretary of Health and Human Services under Bill Clinton, and she was also the president of the University of Miami from 2001 to 2015. Her win marks a flip back to the Democratic Party for the seat that is currently occupied by Republican Ileana Ros-Lehtinen.

Not every position was “turned blue” as many Democrats would have hoped, but the House of Representatives is now majority Democrat. This midterm has been a landmark for women and minorities across both parties. The first Native American women, Sharice Davids and Deb Haaland, as well as the first Muslim women, Rashida Tlaib and Ilhan Omar, were elected to Congress. Jared Polis of Colorado, the first openly gay man elected to be governor, also made history for the LGBTQ+ community.

In this election, the current polarization in society has made people more politically active than ever. Voter turnout in adults ages 18-29 has increased by 188% from the 2014 midterm elections, according to the Atlantic Magazine. The younger generations, who have chosen to no longer sitting idly by as older generations determine their futures, and instead, take charge of their future.