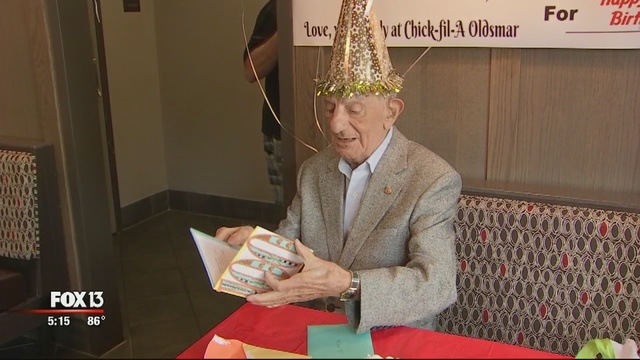 Stephen Bellissimo received a birthday card at his local Chick-Fil-A.

Chick-Fil-A is easily one of the most recognizable food chains in the United States. It is the most popular food chain in over 20 states and is hailed by many as having the best quality chicken of the fast food chains. Chick-Fil-A has once again emerged on top, but not with its famous waffle fries. Stephen Bellissimo from Oldsmar, Florida has received an extremely generous 100th birthday gift from the company: free Chick-Fil-A for the rest of his life.

“I absolutely love Chick-Fil-A. Every time I go to the mall I always try and get some of those golden waffle fries. Chick-Fil-A’s gift to Mr. Bellissimo confirms my belief that they are the best fast food chain out there,” senior Eve Adan said.

On Sept. 24 Stephen Bellissimo walked into his local Chick-Fil-A chain in Oldsmar, which he has been frequenting since it opened 15 years ago. To his surprise, there was a massive check sporting “Free Food For Life” made out to him. As if the tasty food was not motivation enough, Bellissimo said he will be going there every day.

“Chick-Fil-A’s generosity towards Mr. Bellissimo is truly amazing. I think that this adds another dimension to the company, showing that it is truly a customer-centered company,” senior Alain Perez said.

This is not the first time the fast-food chain has gained notoriety in the press. The company’s conservative leadership has been steadfast with certain issues, such as remaining closed on Sundays and encouraging employee prayer sessions. Moreover, its funding of anti-LGBTQ+ groups has no doubt tainted its image. The gift to Bellissimo, apart from being altruistic, will help heal Chick-Fil-A’s public image.