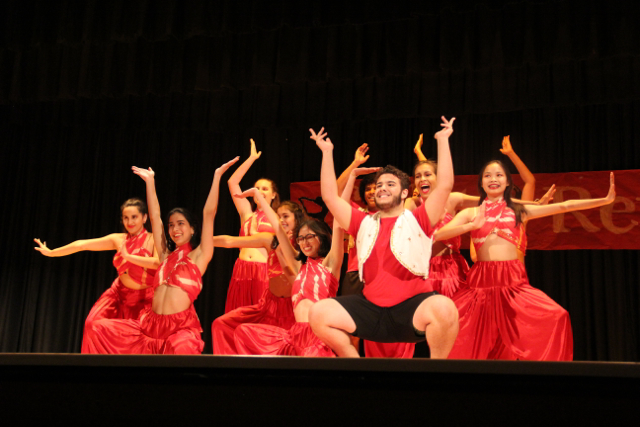 The annual Gablette Revue Show finally arrived at the Coral Gables stage on Apr. 19 in the auditorium. The show gives the team the opportunity to showcase the hard work it puts in every day to create a solid Coral Gables brand.

The Gablettes performed a variety of pieces, all of which bore creative titles, such as “Matrix” or “Dear Parkland,” and communicated specific messages and emotions through their impeccable choreography, background music and vestibule. The “Matrix” set, for instance, featured intense sound while the Gablettes, adorned in all black, danced with an intensity equal to that of the music. The “Dear Parkland” piece was sentimental and powerful, as the sophomore Gablettes honored the victims of the Parkland shooting with a delicate and emotionally charged choreography set to a spoken word about gun violence. The aptly named “Bum Bum Granada Mix” piece, choreographed by officer Julia Andrada, had the entire auditorium shaking to the rhythmic beat of Latin and hip-hop music in tandem with the Gablettes.

“I had firsthand seen how hard they were working to put together a great show. The team deliberated for days on end what moves and songs to include in each set. It came together beautifully and left me speechless,” junior Aisel Galvez said.

The show featured other performers, including the Leonettes from Ponce de Leon Middle School and Gables students from other dance classes. Even kids and the Gablette parents performed sets on stage with the team, both of which gave a lighthearted and familial twist to the show. The Gablette Groupies, a group of students who volunteered to participate in the show, took to the stage for the first time, performing their set “Beautiful Girls.”

Seeing as the show is at the end of the year, the Gablette Revue is also the last performance for the senior Gablettes. Near the end of the show, the team’s captain, Alisa Sanchez, gave a powerful speech on her experience as a Gablette over the years. It was followed by her Captain’s solo and a performance with the other senior on the team, Leslie Smith.

“From start to finish, the show was absolutely mesmerizing. It perfectly captured the essence of an excellent dance team. I have been coming to the show every single year and can’t wait for next year’s performance,” freshman Isa Villarroel said.

The Gablette Revue Show attracts students, parents and teachers, not only because of the Gablettes’ talent, but also because they possess the ability to bring people together around a common goal, to make Gables shine.