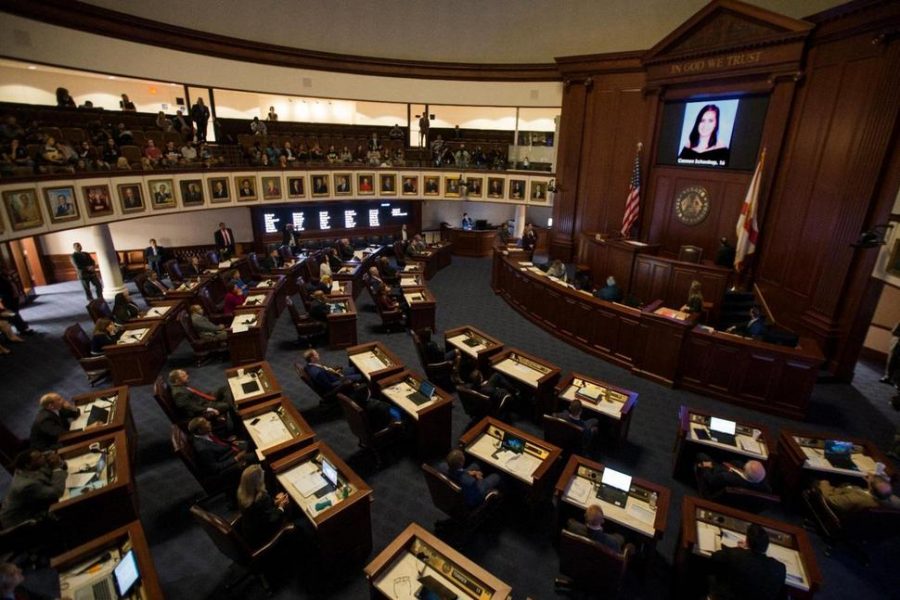 The Florida Senate Chamber in session.

In the wake of the mass shooting at Marjory Stoneman Douglas High School in Broward County, a tsunami of activism and public support for gun reform hit the state of Florida. The state legislative session, which first convened in January, has been dominated by a passionate political debate over gun reform. In spite of Republican control of both chambers of the legislature and the Governor’s Mansion, Florida passed a new school safety bill. This bill aims to provide an all-encompassing solution to school safety, while controversially raising the legal age to buy firearms from 18 to 21.

“Growing up in Florida, I never really contemplated a change to our gun laws. The Parkland shooting has spawned a movement that has affected real change in the country,” junior Aisel Galvez said.

The bill was first introduced in the Florida House of Representatives and passed with a clear majority of 67-50. It was supported by both Republicans and Democrats, who debated bitterly in the weeks prior to the vote in attempts to reconcile differences between their constituents’ interests. On the Democratic side, there was a push for a total ban on the sale of AR-15-style weapons, in addition to raising the legal purchase age. Republicans, however, were skeptical about endorsing of any sort of firearm restrictions. Governor Rick Scott (R) remained apprehensive and did not guarantee the passage of any piece of legislation that got to his desk. Scott vocally opposed a ban of any kind of firearm, preferring instead to focus on preventing dangerous individuals from owning such weapons. Once in the Senate, the bill passed with a margin similar to that it faced in the House and then made its way to Governor Scott. The final bill, apart from raising the legal purchase age, provides an option for teachers to receive firearm training, gives funding for in-school mental health counseling and imposes a 3-day waiting period on firearm purchases. The passage of the bill opposed the National Rifle Association’s (NRA) agenda to maintain the status quo on gun legislation. The NRA is now suing Florida, arguing that the age minimum restriction contained in the bill is a violation of both the 2nd Amendment and 14th Amendment.

“The actions of the NRA demonstrate the magnitude of the battle here. I hope that the movement only becomes stronger in the face of resistance,” freshman Alexandra Torres said.

Activists and reformers have lauded the reactive measures taken by Florida, while supporters of the NRA have expressed outrage over what they perceive to be a violation of their right to bear arms. In keeping with the frenetic nature of the movement, other states will likely pass subsequent legislation on school safety and gun reform. These pieces of legislation will undoubtedly draw opposition from the NRA, but it will then become the task of the judiciaries and the American people to determine the future of gun laws in the nation.