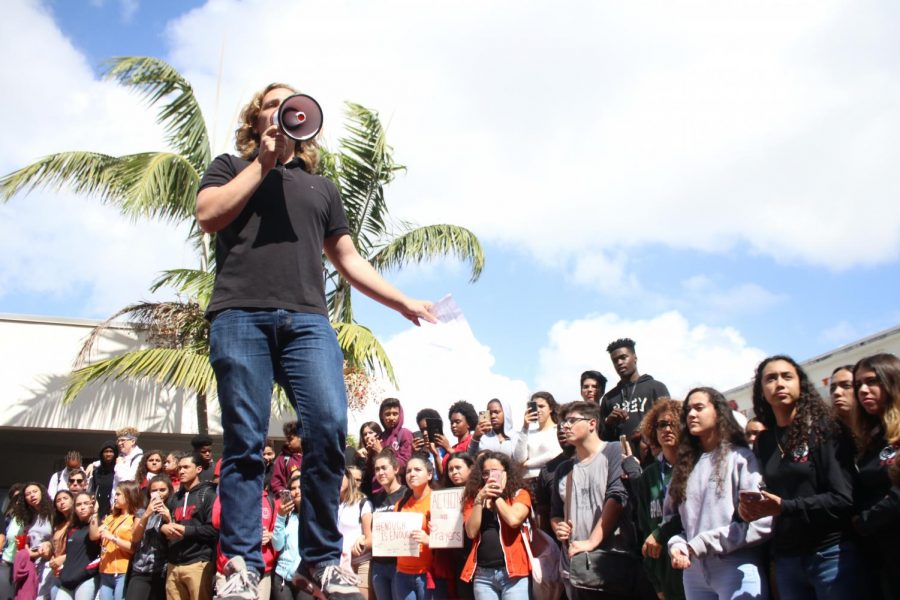 Students protesting in front of the Ralph Moore Building.

In the aftermath of the Parkland school massacre, students all over the United States walked out of their classes in order to exercise their right to peacefully protest. Various schools warned the students that if they participated in the walkout, they were in danger of having disciplinary action on their official school transcripts that would, in turn, hurt the students as they applied to their preferred colleges. Some colleges and universities, however, had an entirely different view on the matter.

While some schools threatened students with disciplinary action if they participated in such events, others allowed their students to participate in a protest, as long as it remained peaceful. Some protests held a moment of silence that lasted 17 minutes, one for each individual who lost his or her life the day of the massacre. During this time frame, students were told they’d be allowed to leave, but had to come back when the protest was over. However, some found that when the time came, the gates were locked, and school security was present and waiting to escort them back to class.

“Gun issues have gotten so out of hand. People are beginning to realize that these issues are out of control, and we are no longer standing for it. To quote our predecessors, the only way to get things done is to be civilly disobedient. I was ready to face whatever trouble could have transpired. So, instead of having a walkout occur, we decided to peacefully protest in front of one of our school buildings to send an even greater message,” senior and Gables protest organizer Will Breslin said.

Schools like Yale, Dartmouth, Massachusetts Institute of Technology (MIT) and Brown have issued statements on social media, and other platforms of communications, stating that they will not rescind acceptance letters nor deny the acceptance of a student based on disciplinary actions brought against them for “peacefully protesting.”

“I am very proud of what I did that day. I stood up for something I believe in and I would do it again and now that I know some of my top colleges stand with me, I no longer worry in the back of my mind if my school records are impacted,” sophomore Chloe Casaudoumeq said.

Admissions officials at Dartmouth College in Hanover, New Hampshire shared the message that their school supports peaceful protests and believe students should always “speak [their] truth”.

Students who were hesitant to participate in such protests initially feared that changes in the status of their acceptances at certain institutions could have possibly occurred, but thankfully they have now been given peace of mind. Those colleges and universities that have spoken out have encouraged youth activism and allowed the younger generation to make a change without fearing repercussions.