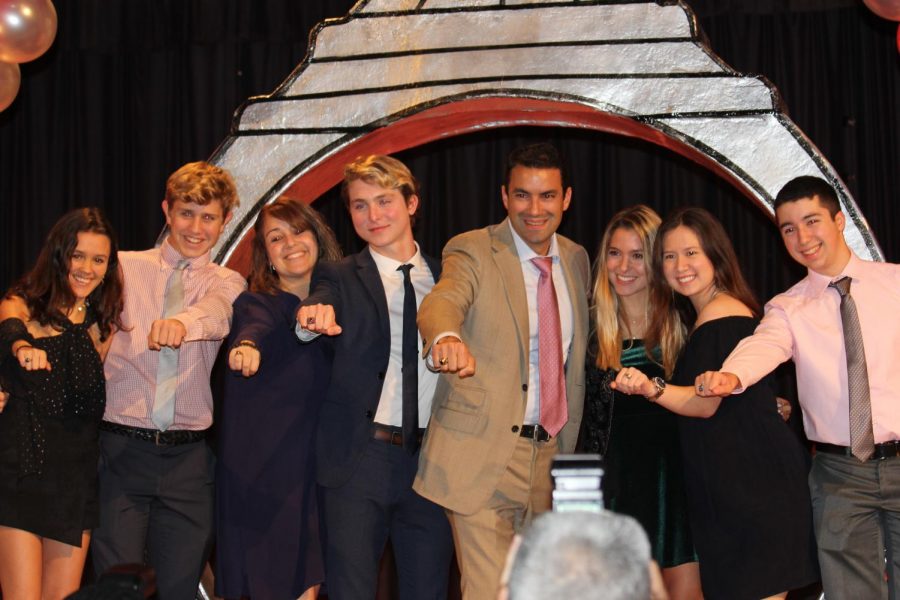 Class of 2019 officers smile with their sponsor, Ms. Depaola, after receiving a ring

The time-honored tradition of the class ring is one that unmistakably defines the high school experience of many students around the world. The ring’s meaning can vary widely from individual to individual; for some, it is a symbol of the hard work they put into high school, and for others, it is a piece of jewelry to serve as a memory of their time at Gables. One thing is certain, the smiles of each and every junior as they received their rings cannot be expressed through words alone.

“I was really excited going into it. My parents and grandmother were dying to see the ring they had bought for me. I had no real expectations for the ceremony, but was blown away at how it came out,” junior Sofia Gonzalez-Lansi said.

The ring ceremony took place in the auditorium, which was quickly filled with the juniors’ family and friends. The ceremony began with a short introduction on the meaning of the ring by members of the junior class board, including President Alfredo Wolfermann and Vice President Sutton Payne. Afterwards, the junior class board received their rings and were photographed in front of the large ring at the center of the stage, where students would pass through and take photographs.

The ring distribution then began row by row, with the students walking to the back of the stage, receiving their ring, having their name announced and then walking across the stage to receive their box and flower. The ceremony concluded with a short speech from Principal Adolfo Costa, instructing the juniors to put on their rings at the same time. The turning of the ring is a symbolic gesture wherein the student turns the ring a certain number of times, corresponding to the graduation year, reserving the last turn for a special individual in their life. Emotional parents proceeded to reunite with their children and take pictures of them with their newly minted rings.

“Although I didn’t get a ring myself, I had the pleasure of seeing my friends receive theirs. The ceremony was beautifully planned and executed. It was truly a beautiful sightseeing my friends and their parents share such an important moment” junior Aisel Galvez said.

Junior year is notorious for being the most difficult year in high school, but the junior class ring represents a rite of passage celebrated by all who surround the student, making the effort of each student worth it. Every junior can now walk the halls with a spring in their step, sure in the fact that they are indeed upperclassmen.