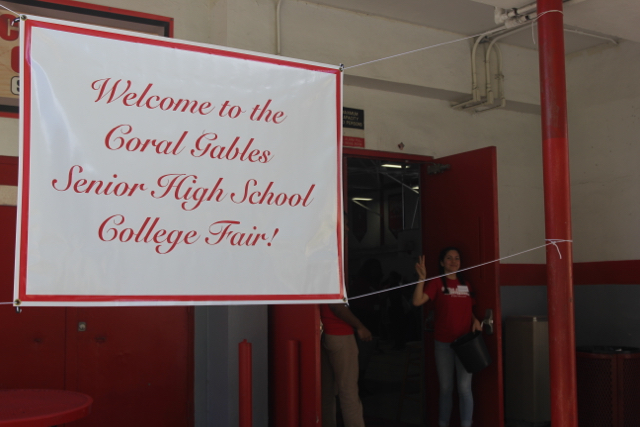 The event was coordinated by PTSA volunteers in conjunction with AP coordinator Ms. Stack

While students are in the midst of preparing their college lists, nervous yet excited towards the future, they file into the gym on Oct. 10 to find their dream school. From California to New York, 73 representatives set up shop in the gym to put their school on display in what is the largest college fair in any Miami-Dade County high school. The diversity of schools allows for all students to narrow down where they would like to spend their four years after graduation.

“College Fair was remarkably beneficial to me and my search. I had never spoken to a college representative prior to the college fair at Gables. I had a shortlist of schools in mind, but after the fair, I was able to weigh factors such as finances and location with experts,” said junior Aisel Galvez.

All of Florida’s state universities were present, including the University of Florida and the University of Miami. Members of the Ivy League such as Harvard University, Columbia University, and Dartmouth College were also in attendance, enticing students with their academic prowess and generous scholarships. This large variety let participating students ask questions about the admissions process and the specifics of campus life. The holistic description provided by the representatives left the students with a better understanding of the application process and the choices they must make in the near future.

The event was coordinated by The Parent Teacher Student Association (PTSA) and the College Assistance Program (CAP) office. The event was run by students and parents alike who were responsible for collecting tickets and directing both students and college representatives.

“Working college fair was more fun than I initially expected, I had an amazing time talking to the representatives from the wide variety of schools there. The representatives were genuinely happy to be there and representing Gables for me is always an honor,” said junior Keyshawn Felton.

The experience however, was entirely for the students. For many it was their first time exploring colleges and universities that appeal to them. The one-on-one experiences they had with college representatives is priceless in the search for their dream school. As opposed to having to go to a college fair hosted elsewhere, the comfort and familiarity of Gables made the college search that much easier, allowing students to really open up and get a better understanding of potential schools.